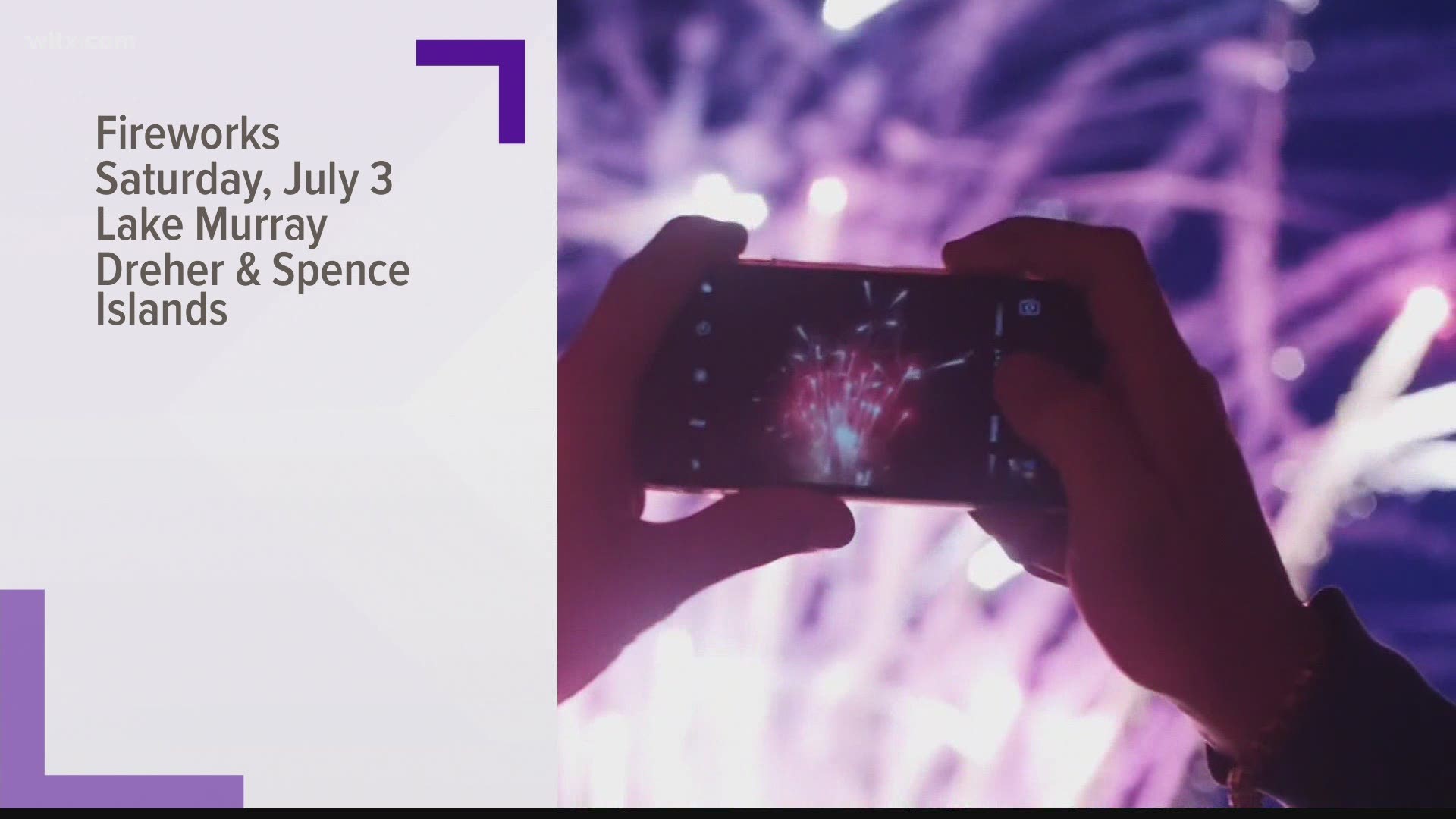 COLUMBIA, S.C. — Fireworks displays are a popular way to celebrate the Fourth of July in the Midlands. Last year, of course, most public fireworks displays were canceled due to the COVID-19 pandemic, but this year, they're all back.

News19 has received information about several major fireworks displays in the Midlands. Here's what we've collected so far. If you know of a major fireworks event that is not on this list, email us at news19@wltx.com.

4th of July Celebration on Lake Murray presented by Lexington Medical Center. This event will be held at dusk – a little after 9 p.m. – on Saturday, July 3. Now in its 33rd year, this celebration is touted as South Carolina’s largest fireworks display with fireworks at two locations, Spence Island and Dreher Island State Park. Pro tip: while best viewed by boat, you can see the fireworks display on land at Dreher Island State Park.

Fireworks with the Phil, Saturday, July 3. The South Carolina Philharmonic Orchestra will perform as a full orchestra at Segra Park in the Bull Street Development with a fireworks finale. Gates open at 7 p.m., music starts at 8:30 and fireworks begin around 9:15. The musical program will feature a mix of patriotic and Americana, starting with "The Star-Spangled Banner," with selections from "West Side Story," "Hamilton," "The Music Man" and more, ending with John Phillip Sousa's "Stars and Stripes Forever." Tickets are $10 per person, $8 for people with valid military ID, and free for children 12 and under.

Baseball and fireworks on the Third AND Fourth of July! Take in the game between Lexington County Blowfish and the Macon Bacon on Saturday, July 3, and stay for the special America-themed Concert in the Sky Fireworks show or go on Sunday, July 4, for the game against the Spartanburgers at 7:05 p.m. and stay for the fireworks display after the game. Individual tickets $6-$9

It's a celebration of music and food at the Rockin' Red, White & Blue festival 1-10 p.m. on Saturday, July 3 at Doko Meadows Park. Bring a lawn chair but leave the cooler at home. The music starts at 5 p.m. with Mason Horne, followed by Blues Deluxe and DB Bryant. Around 20 food vendors will be there offering everything from donuts to BBQ and Luna Trix Arts Playground will be there for the kids. Fireworks begin at 9:30 p.m.

The City of Sumter will hold a fireworks display at 9:30 pm. on July 3 to celebrate July 3. It will be held at Dillon Park, which is just off Highway 378. Shaw Air Force Base hosts the 2021 Freedom Bash with Cassadee Pope and Walker Hayes 5 p.m.-11 p.m. Saturday, July 3. There will be a 20-minute fireworks display after the music. The event is free.

North Charleston is hosting its fireworks display, billed by the city as the largest in the Lowcountry, on July 4 from 7 to 10 p.m. at Riverfront Park which is located at 1061 Everglades Ave., North Charleston. The event is free to the public with all general admission for attendees. Parking is free but walking, biking, carpooling, and rideshare are encouraged. No entry before 5 p.m.. No grills, sparklers, or outside fireworks. Bags will be searched.

Kiawah Island will kick off its 4th of July festival at 6 p.m. at Night Heron Park located at 4000 Sea Forest Drive on Kiawah Island. The festival runs until 9:30 p.m. Admission is complimentary but food and beverage tickets go on sale at 4 p.m. The event and gate access are limited to Kiawah Island guests and residents.

The Town of Summerville will host its Fireworks and Freedom Fest at Gahagan Park on Sunday beginning at 5:30 p.m. The park is located at 515 W. Boundary Street in Summerville. The event is free and runs until 9:30 p.m. Attendees can bring lawn chairs, blankets, umbrellas, and water as well as lunchbox-sized coolers. No pets, tents, personal fireworks, grills, or alcohol will be allowed. Drinks provided by the on-site vendor in a designated area.

The City of Goose Creek will host its Fabulous Fourth in the Creek on July 4 from 6:30 p.m. until 9:30 p.m. The event will be held at the Goose Creek Municipal Center located at 519 N Goose Creek Blvd. Admission and parking are free; though, parking is limited. Outside fireworks, sparklers, and alcohol are prohibited.

The city of Charleston is playing host to the Budweiser Freedom Fest beginning at 4 p.m. on July 4. The event is being held at Harbor Hall, located in the Cruise Terminal of downtown Charleston - 196 Concord Street. General admission is $20. VIP is $75 and VIP Under 21 is $50. Kids 10 and under get in free. Limited on-site parking is available so carpooling or rideshare is recommended. Chairs and blanks are allowed but not tents or umbrellas. No outside food, beverages, or coolers are allowed. Attendees are told to leave pets at home.

Surfside Beach is hosting its 4th of July Celebration beginning at 6 p.m. The event goes until 10 p.m. and is being held at Martin Field.