Idelisa Olivera was born on a farm in Cuba in 1916. She moved to America in 1974. Her family says her only birthday request was to be on the news. 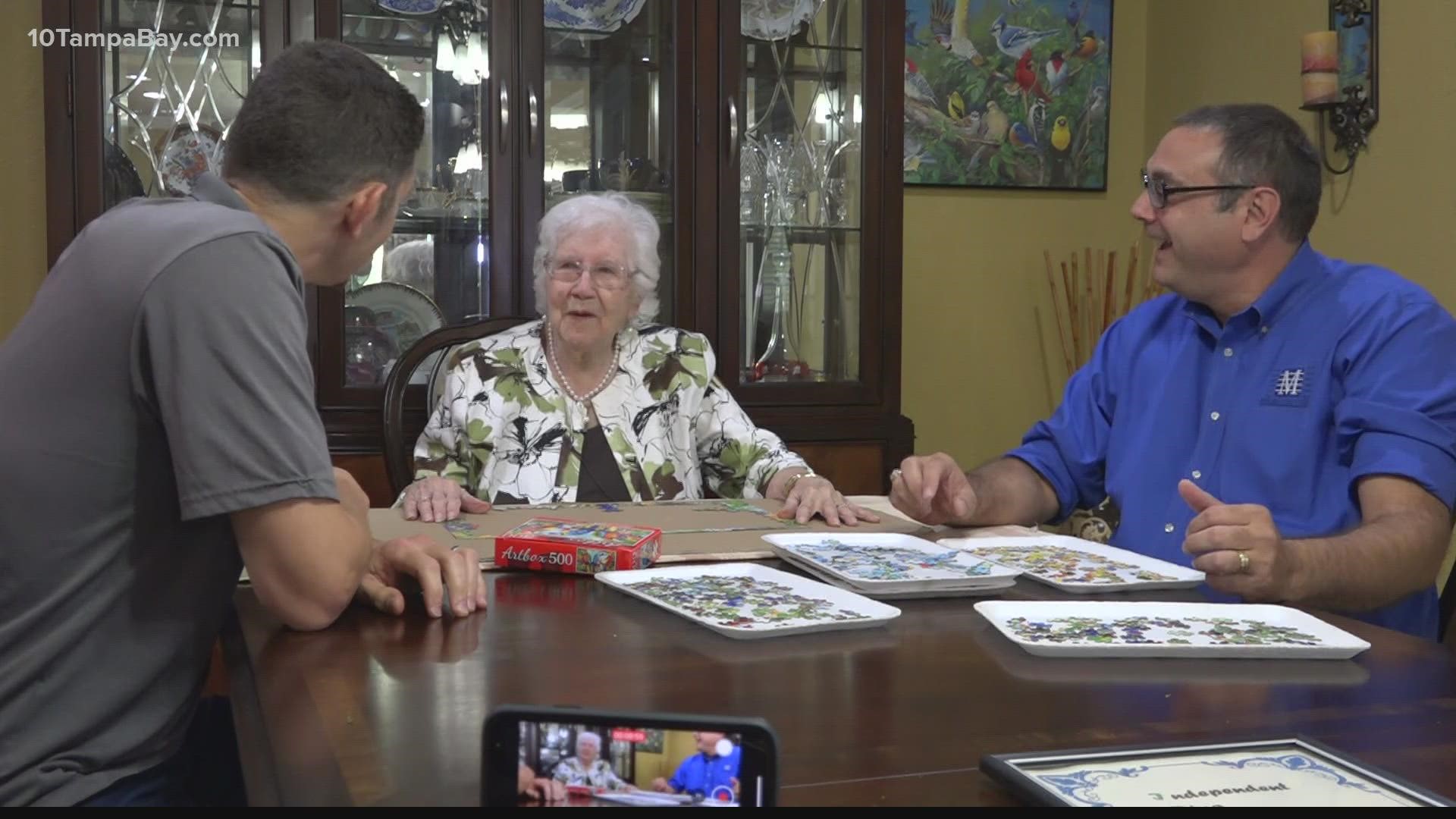 TAMPA, Fla. — What do you get a 105-year-old for her birthday? That’s the tricky question facing the Magro family.

“She deserves the world,” Alex said her his grandmother, Idelisa Olivera.

The matriarch of the Magro family is celebrating a milestone birthday on Aug. 15. It will be another opportunity to shower the woman they call “Yaya” with love.

Olivera would probably enjoy some cookies or candies for her birthday. Her daughter, Borja, said chocolate Milano cookies are her favorite. Puzzles would have been another good choice. Yaya spends little bits of each day working on them.

Instead, she had her request idea for a gift.

“When I heard that she just wanted to be on the news for her 105th birthday, how do you deny her that?” said Michelle Magro, granddaughter-in-law.

The family reached out to 10 Tampa Bay hoping we could fulfill that request. I spent the afternoon doing puzzles with Olivera and asking her son, Jamy, to translate her Spanish to English.

My main question: Why ask to be on TV for your birthday?

Olivera was born on a farm in Cuba in 1916. She left for Spain in 1971 before coming to the United States three years later. She lived in Miami for a short period before settling in Tampa. Yaya worked until she turned 67 and then retired to spend more time sewing and gardening.

All the while, family remained her top priority.

“She’s fantastic. My mother is so into family and relationships and helping people,” said Borja, Olivera’s only daughter. “We had to renew her I.D. and I told the driver’s license office, ‘Don’t worry. We’ll be here for 111’.”

The common theme in her home is puzzles. There are multiples hanging on most rooms in their Tampa home and even a stash of complete ones in the bedroom closet. Each one is at least 500 pieces – although she prefers the 1,000-piece variety. It’s Borja’s job to glue the finished puzzles together.

The family knows they’ll be gifted puzzles upon their completion. Each family member looks forward to them greatly.

“Our kids are teenagers and up, and for them to have a great grandmother is a blessing,” said Alex, standing in front of old photos of Olivera spread across the dining room table. “Even if she lived down the street, she’s always been with us. It’s a beautiful thing to have her in our lives.”

Olivera doesn’t speak English. She speaks Spanish with her family. Truly, sharing the puzzles has become her love language.

“She deserves the world. She deserves beauty for many more years,” he said through tears.

Olivera was one of fifteen children in her family. Her secret to a long life has been eating healthy food and doing those puzzles every day. Michelle remembers being surprised by her physical proficiency during a family cruise when the then-95-year-old Yaya had no issues walking up and down ramps for the trip.

Celebrating 105 years with be easy for the tight-knit family. They plan to mark the occasion with family and friends on Sunday. The Magro family knows to cherish every moment.

“She eats well. She walks well. She has to use a walker because she’s afraid of walking,” said Jamy. “Other than that, she’s really happy that she’s doing good.”