A look back at Rush Limbaugh's foray into the sports world

The late conservative talk host was part of ESPN's Sunday NFL Countdown show for four weeks during the 2003 season before exiting amid controversy. 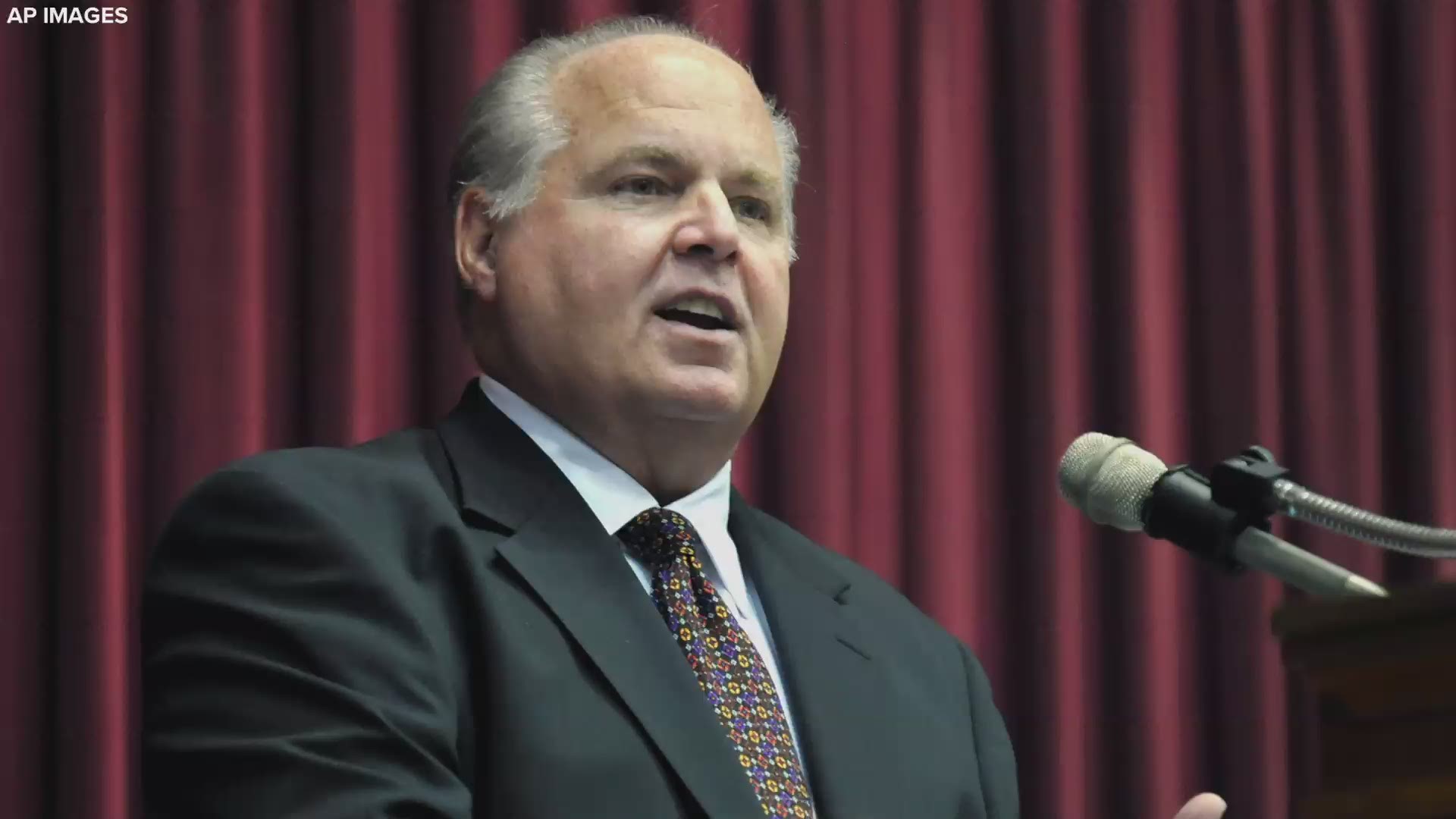 CLEVELAND — Conservative radio talk host Rush Limbaugh passed away on Wednesday at the age of 70. For more than 30 years, Limbaugh was a fixture on hundreds of stations across the country--including Cleveland's own Newsradio WTAM 1100--as he helped change the course of politics in America.

But Limbaugh was also involved with sports from an early age. When his radio career was slow to take off in the 1970s, Limbaugh spent time with the Kansas City Royals as the team's promotions director.

As his star was beginning to rise in the early 1990s, Limbaugh was often seen at Phoenix Suns games, hanging around star forward Charles Barkley and coach Paul Westphal. During the epic 1993 NBA Finals between the Suns and the Chicago Bulls, the Los Angeles Times noted that "the pudgy, conservatively dressed conservative commentator and friend of Westphal, played air guitar during one break to 'That’s What I Like About You' by The Romantics."

In 2003, ESPN decided to add Limbaugh to their Sunday NFL Countdown show, working with hosts Chris Berman, Tom Jackson, Steve Young, Michael Irvin, and Chris Mortensen. Limbaugh would give a commentary at the beginning of shows, then throw 'challenge flags' and offer counterpoints to any takes that he disagreed with during the broadcast.

"We were impressed with his degree of football knowledge and his passion for the sport," Bob Rauscher, "Countdown's" senior coordinating producer, said of Limbaugh to Entertainment Weekly when the announcement was made, "and finally we put two and two together."

Despite ESPN reporting that ratings with Limbaugh on the show went up 10 percent overall, and 26 percent among the 18-to-34 male demographic, the marriage between the conservative host and ESPN didn't last long.

On September 28, 2003, Limbaugh threw a challenge flag during a discussion about the merits of Philadelphia Eagles quarterback Donovan McNabb. His racially-charged comments touched off a firestorm.

"Sorry to say this, I don't think he's been that good from the get-go," Limbaugh said. "I think what we've had here is a little social concern in the NFL. The media has been very desirous that a Black quarterback do well. There is a little hope invested in McNabb, and he got a lot of credit for the performance of this team that he didn't deserve. The defense carried this team."

ESPN executive vice president Mark Shapiro came to Limbaugh's defense early during the controversy. "This is not a politically motivated comment. This is a sports and media argument. Rush was arguing McNabb is essentially overrated and that his success is more in part [due] to the team assembled around him."

Despite Shapiro's explanation, 2004 Democratic presidential candidates Wesley Clark, Howard Dean and Rev. Al Sharpton all called for ESPN to fire Limbaugh. Others in both political and athletic circles also lashed out at Limbaugh's comments. The National Association of Black Journalists also called for the network to "separate itself" from the host.

"ESPN's credibility as a journalism entity is at stake," NABJ president Herbert Lowe said in a news release. "It needs to send a clear signal that the subjects of race and equal opportunity are taken seriously at its news outlets."

Less than a week after making his remarks, Limbaugh turned in his resignation to ESPN.

"My comments this past Sunday were directed at the media and were not racially motivated," Limbaugh said in a statement issued late Wednesday night. "I offered an opinion. This opinion has caused discomfort to the crew, which I regret. I love NFL Sunday Countdown and do not want to be a distraction to the great work done by all who work on it. Therefore, I have decided to resign. I appreciate the opportunity to be a part of the show and wish all the best to those who make it happen."

Limbaugh tried to get back in the NFL game in 2009 as part of a group to buy the then-St. Louis Rams. His comments about McNabb, plus a later comment on his show that "the NFL all too often looks like a game between the Bloods and the Crips without any weapons. There, I said it," would doom any chance of his being a part of any group that would own a franchise.

"I've spoken to the Commissioner [Roger Goodell] and I understand that this ownership consideration is in the early stages," wrote Smith. "But sport in America is at its best when it unifies, gives all of us reason to cheer, and when it transcends. Our sport does exactly that when it overcomes division and rejects discrimination and hatred."

Goodell also wasn't shy about weighing in on the prospect Limbaugh as a part-owner in his league.

"We’re all held to a high standard here and divisive comments are not what the NFL’s all about," said Goodell. "I would not want to see those kind of comments from people who are in a responsible position in the NFL, no. Absolutely not."

Limbaugh blamed Smith, executive director of the NFLPA and an "Obama-ite," along with Sharpton and Rev. Jesse Jackson, whom he referred to as "race hustlers," for the decision to drop him from the ownership group.

One sport that Limbaugh took part in that did not result in controversy was golf. In 2011, he appeared on "The Haney Project" on the Golf Channel. Haney, best known for being Tiger Woods' swing coach, gave Limbaugh tips on improving his golf game.