Nightbirde, a singer from Zanesville, Ohio, announced last week she was leaving 'AGT' amid her battle with cancer. 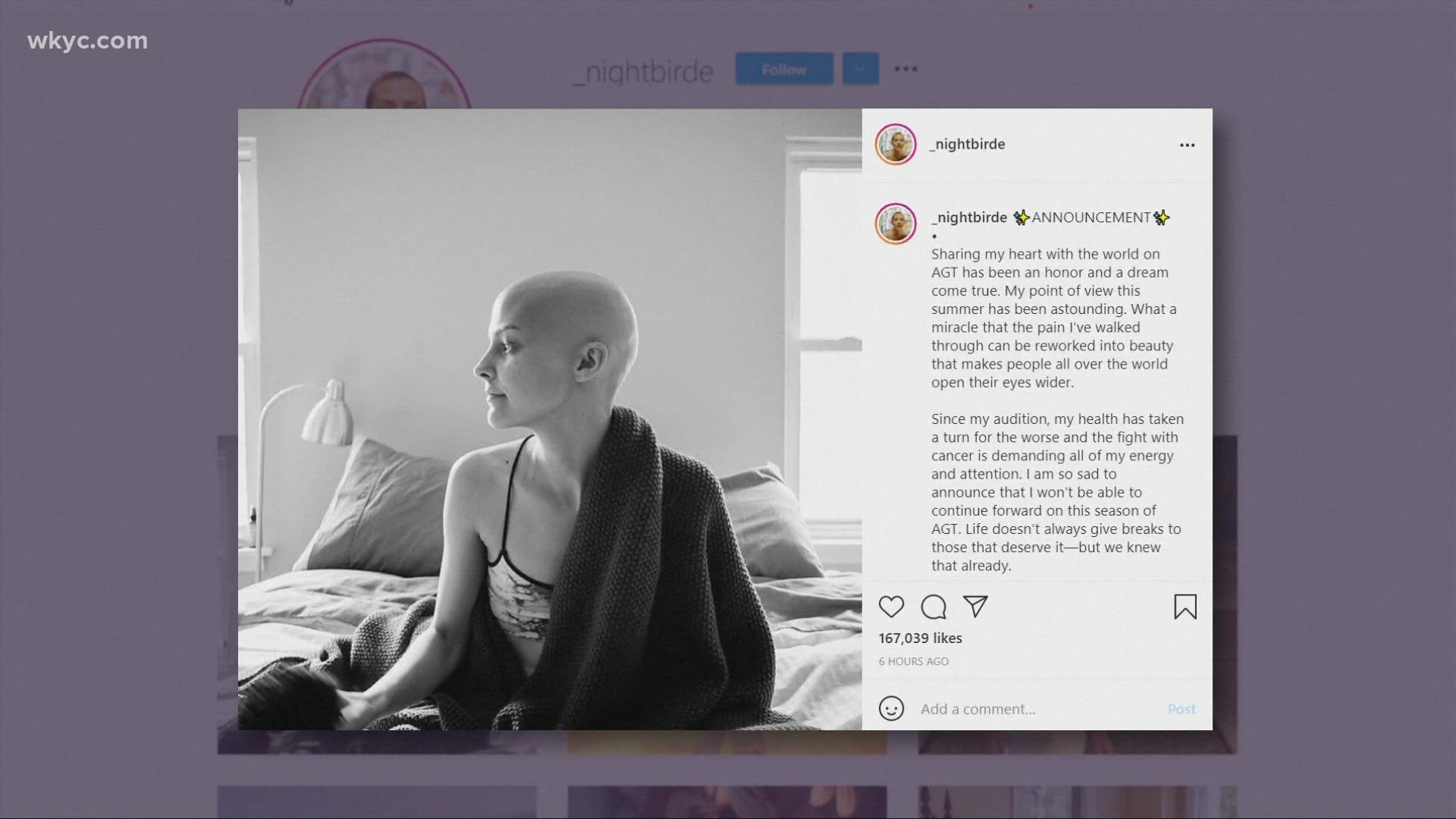 LOS ANGELES — Editor's note: Video at the top of this story was originally published in a previous story about Nightbirde on Aug. 9, 2021.

As America’s Got Talent kicked off its live shows this week, the Zanesville, Ohio, singer known as Nightbirde made a special appearance on Wednesday night’s episode.

It was an emotional moment that came just days after Nightbirde – whose real name is Jane Marczewski – announced last week that she was leaving AGT as “the fight with cancer is demanding all of my energy and attention.”

“The entire world is suffering adversity right now, and you are the poster human for courage in the face of adversity,” judge Howie Mandel told Nightbirde as she appeared via video. “For poise, for beauty and for fight. That’s we all need to do.”

During her initial AGT audition, Nightbirde earned the Golden Buzzer from judge Simon Cowell. He fought back tears as he addressed her situation Wednesday night.

“You made the decision, rightly so, that your health is your priority right now,” Cowell told Nightbirde. “I know the last time we spoke, you actually said you feel like you’ve let people down. I just want to say on behalf of all of us, you haven’t let anyone down. Even though you haven’t competed, you’ve already won, as Terry [Crews] said. Your clip has had such an impact on so many people with your courage and who you are. The most important thing is your well-being and your health and your recovery. On behalf of all of us here, we’re sending you our love, our prayers and we can’t wait to see you again soon. Thank you so much for auditioning on the show and for singing such a beautiful song."

You can watch her special appearance from Wednesday night's episode below:

SUBSCRIBE: Get the day's top headlines sent to your inbox each weekday morning with the free 3News to GO! newsletter

The song – It’s OK -- which brought her the Golden Buzzer, has been viewed more than 31 million times since it was uploaded to YouTube on June 8.

“It’s a song I wrote for myself in the middle of the night when I needed those words so bad,” she said. “It’s beautiful to see the world welcome that song into their own dark night. I’m overwhelmed by it.”

You can watch her Golden Buzzer moment in the player below:

A GoFundMe for Nightbirde has now raised more than $451,000 as of 6:15 a.m. Thursday. It was launched to help pay for cancer treatments, which she says aren’t covered by her insurance. You can donate HERE.

“I cannot say thank you enough for the opportunity to have a moment to share my story,” Nightbirde told the judges Wednesday night. “I think we’re witnessing such a beautiful picture of the human spirit and the triumph of the human spirit. I think it’s restored my faith in humanity a whole lot to see people come together just over the fact we all hurt, we all suffer and we all have the potential to overcome. This is the most beautiful thing that’s ever happened to me in my life.” 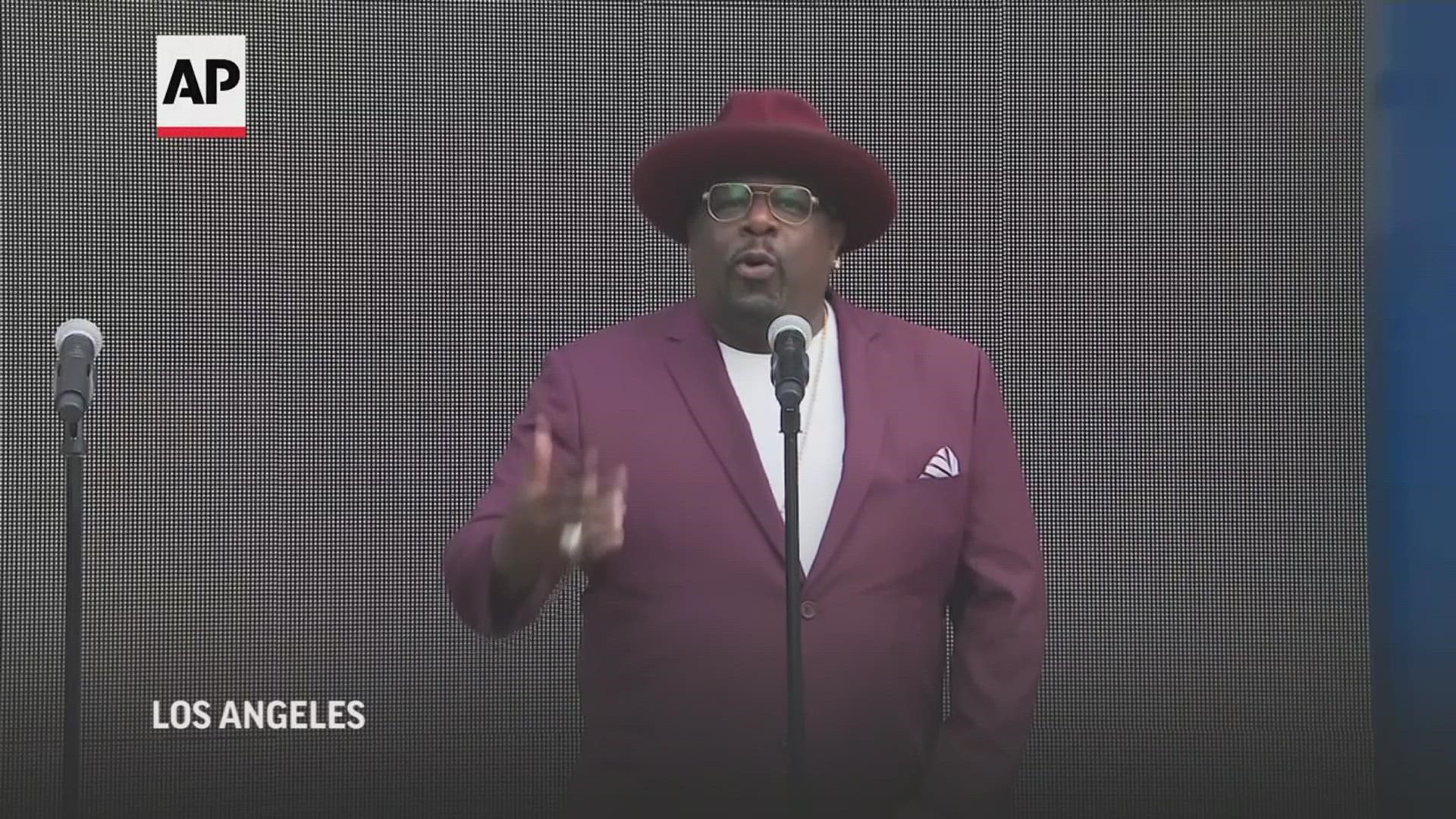