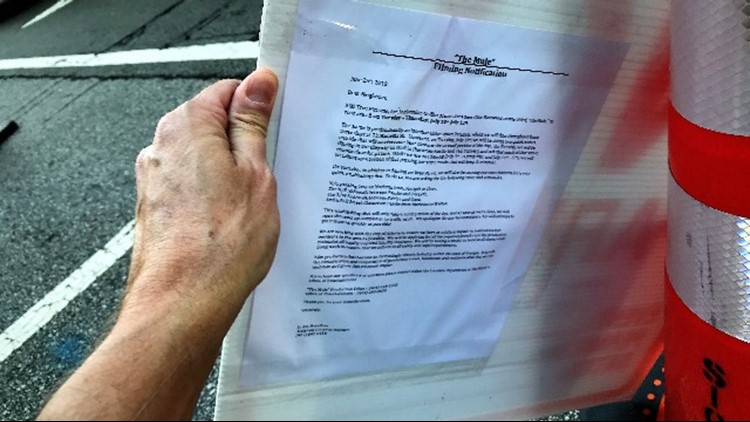 ATLANTA- We didn't find any of the familiar KiKi production signs we've seen around shoots for Clint Eastwood's "The Mule" but we found plenty of cool stuff downtown.

Right around the corner from Georgia State University along Fairlie, Forsyth, and Marietta Street parking lanes are closed off.

And Detour signs are up.

If you look carefully at the back of the signs, you'll find a clue. It's the production letter for a shoot for "The Mule".

It details a few outdoor scenes and says that most of the filming will be inside in an office-like setting.

We found several cars from the movie. They included the truck from Larry's Plumbing featured in the film.

Along with an Ambulance with Illinois plates.

And several cars with Illinois plates.

We also found a base camp that included food trucks...

As well as trailers for the crew.

"The Mule" is based on the true story of a WWII vet in his '90's who gets mixed up working as a smuggler for a drug cartel. Clint Eastwood is the star and director. Laurence Fishburne and Bradley Cooper also star. Right now the release date hasn't been announced.

If you get any cool production pictures or star sightings, share them with us at the A-Scene!

Share your production signs with us on the A-Scene!
WXIA