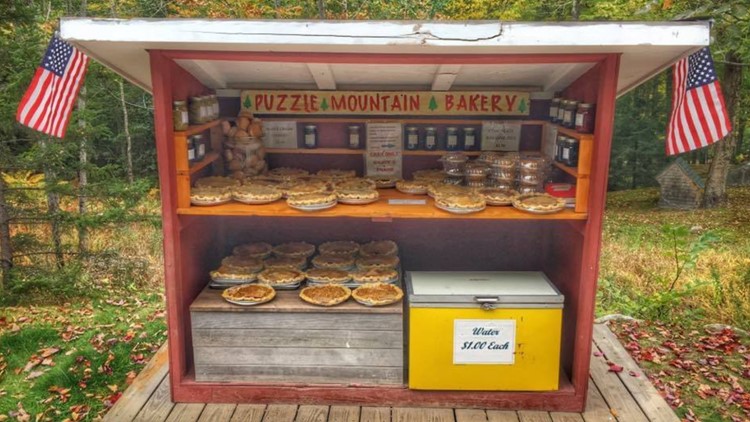 Maine family bakery thrives while selling on the honor system

NEWRY, Maine — For the last 21 years, people from all over the country and beyond have been flocking to Newry for a sweet taste of Maine’s iconic desserts from a one-of-a-kind bakery cart.

Ryan and Devon Wheeler, co-owners of the Puzzle Mountain Bakery, located at 806 Bear River Road, say, "Customers find our place magical, a hidden gem, and many have made this their annual family/friend ritual."

Each morning, the couple wakes up at 4 a.m. to bake fresh fruit pies, whoopie pies, maple cream cookies, and jam to sell on the honor system. They usually put out the first batch of baked goods around 9 a.m. and stay open until 7-8 p.m. unless they sell out early.

Devon, says the bakery, which has no cashier, was started by Ryan’s mother, Mary Jo Kelly, back in 1999. She was inspired by the concept of the honor system after reading a magazine article about someone doing something similar. Immediately after, Mary Jo Kelly set out a table with an umbrella and a handful of pies. The family has been baking the now-famous sweet desserts ever since.

Today, the couple runs the family business. Ryan primarily bakes, while Devon focuses on inventory, financials and media inquiries. They both say that they love what they do. "This business is our life and all of our efforts go into business growth," they say.

On a busy day, Devon says they make over 20 different flavors of pies, and about 5,000 pies every season. If it was up to their 3-year-old son, Asher, they would be making much more. "He continually tells us we need to bake pies to sell," Devon says. "He even pretends to have his own pie cart."

So, I had to ask the business owners about people and honesty. Does the honor system really work? "Most people are honest, but we definitely still get those who steal, especially during the heavy traffic season during the holidays," they told me.

The couple says they also lose a lot of inventory to wild animals such as raccoons, crows and bears. "They can’t resist our pies," the couple says. "It’s funny how they tend to just take a pie or two rather than attacking the stand.”

So, while the bears favor the pies, people love it all, especially the cookies. Wheeler says they sell very fast. So if you want to make sure you get to try the cookies and their wildly popular, wild Maine blueberry pie, you need to get there early when the Puzzle Mountain Bakery opens up for the 2020 season around Memorial Day weekend. They stay open through November.

Just in case you love a classic apple pie, they also bake that, along with strawberry rhubarb, and blueberry crumb pies. Most of their ingredients are bought locally from DownEast Foods in Auburn, while the blueberries come from W.R. Allen Inc.

In the summer of 2020, the couple says they will be opening a new bakery in Bethel where they will be offering single slices of their famous pies and even ice cream. “This business is our life and all of our efforts go into business growth,” they say. But don’t worry, the original stand in Newry will be unchanged.

So, how do you feel about the honor system?