A case involving a dog allegedly ruled to be dangerous in Fairfax County has gotten attention on social media and led to calls for the dog's euthanization to stop. 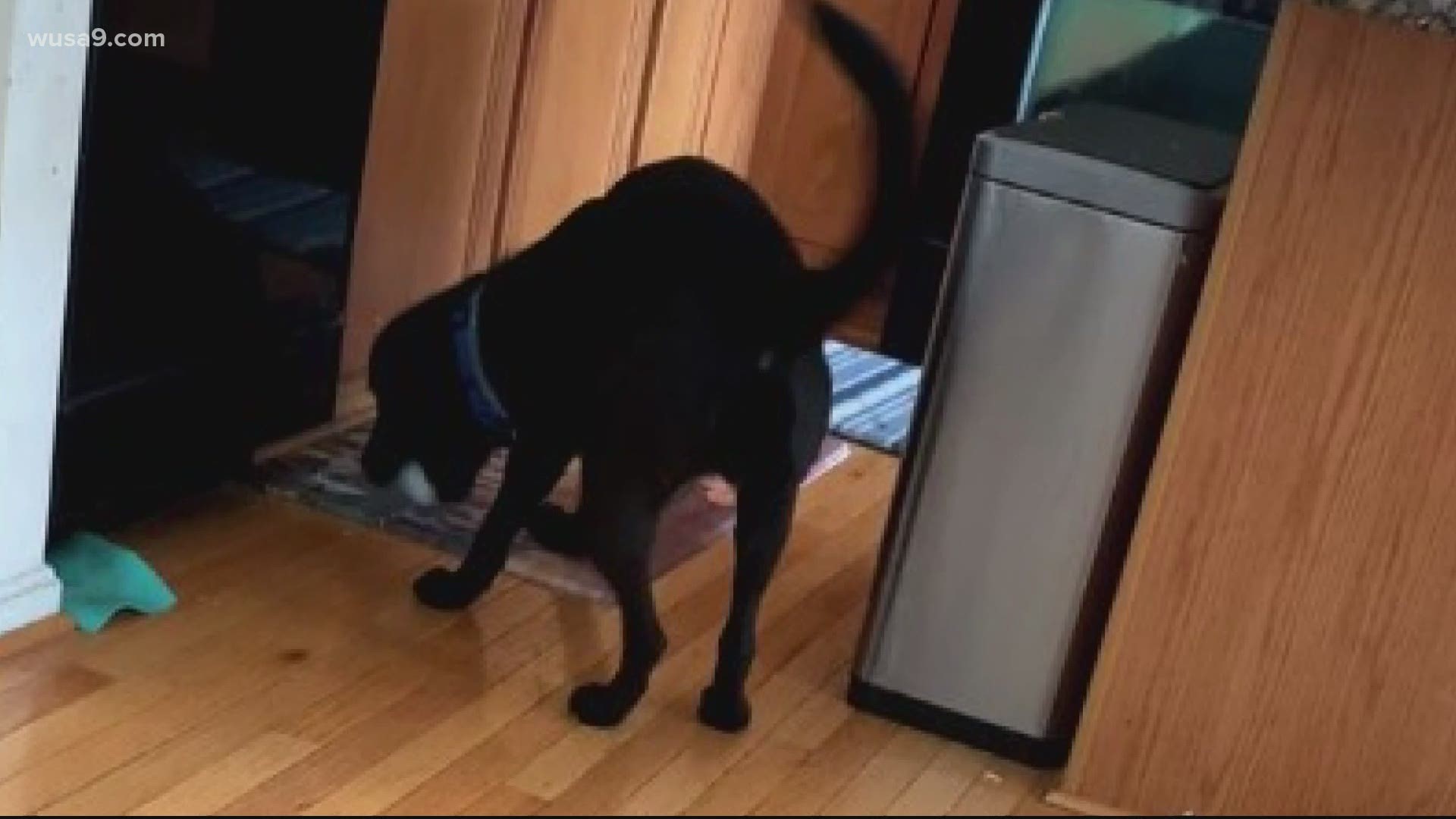 FAIRFAX COUNTY, Va. — A group of neighbors hopes to save the life of a young dog after it was ruled to be dangerous and could be euthanized in the coming days.

Daniella Bizzoco adopted "Draco," a two-year-old mixed lab, back in April and soon developed a strong bond with him.

"He was so sweet. He’s really adorable," she said. "We had him for two months but within those two months, we got really attached to him.”

An opportunity in New York this summer eventually led to Bizzoco needing to move and find a place that would be able to house Draco. However, after being unable to find a suitable living space that allowed dogs, she contacted a family who later adopted him.

As time passed, Bizzoco said that the new owners gave good reviews of Draco and did not raise any issues.

Things changed in early September when she learned that the family surrendered Draco to the Fairfax County Animal Shelter after alleged problems.

"I told them that if there were any complications to call me and let me know and I’d be glad to take Draco off their hands," Bizzoco said. "In August is when I guess the biting began. I called the shelter right away and I was like, 'is there any way I can get him back?'"

The situation would soon grow worse after Bizzoco said a dangerous dog case was filed with Draco.

"It was so shocking because even when my boyfriend would play with Draco, Draco never went near his hand," Bizzoco, who believes Draco may have been accidentally triggered during the reported episodes, said.

As a result of the numerous alleged bites, Draco was later ruled to be a dangerous dog.

After being contacted by WUSA 9, the family that most recently owned Draco and surrendered him to the animal shelter said the dog bit family members on three occasions that left injuries and broke skin.

"We have been through a lot with the case and harassment and we are just a very private family, so this all we are comfortable with sharing," one of the family members wrote in a text to WUSA9's Tom Dempsey. "To add more perspective on the bite to the face, it was completely unprovoked. I was bitten about half an inch under my eye, my upper lip and above that. I still have the scars."

The Fairfax County Animal Shelter told WUSA 9 on Monday that Draco was being cared for at the facility. In a statement, the shelter said it had no input into classifying the dog as dangerous and said it was against county policy to release dangerous dogs through adoption or transfer.

"Draco was surrendered to the shelter after biting people in his family and was later adjudicated as dangerous in General District Court on October 19; he is now legally a dangerous dog," the statement read. "The shelter is caring for this dog during the proceedings, but the Fairfax County Animal Shelter had no input into the charges or adjudication. In recognition of the importance of public safety, it is against County policy to release legally deemed dangerous dogs via adoption or transfer." 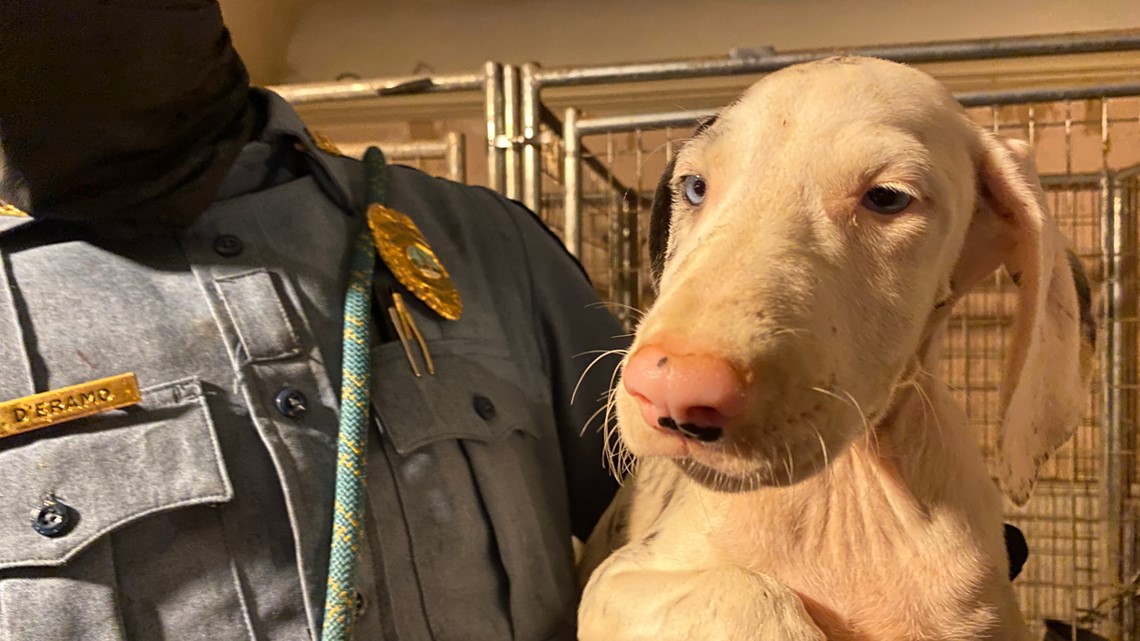 Rescuers say they still can't shake the stench after saving 42 dogs and rabbits from basement cages
Great Danes were stuffed four to a cage, standing or sleeping in their own waste with no access to food or water in a Southeast Washington home. WASHINGTON - Nearly 40 dogs are recovering in a D.C. shelter after an anonymous tip led the Humane Rescue Alliance to a filthy basement in a Southeast Washington home.

Moving forward, Draco could be euthanized as soon as this coming week.

"There are so many emotions and we don’t know what’s going to happen now," Bizzoco said. "Why put Draco down? He’s only two. He knows what he’s doing. He’s smart. It was probably by accident.”

The case has gotten attention on social media and led to a post about the dog's plight being shared hundreds of times on Facebook.

Dr. Ed Marits, who serves as director of the Second Chance Animal Rescue of Mount Vernon, has also raised concerns about the allegations against the dog.

"All canines can have 'puppy behaviors' as long as three or four years," he said on Sunday. "A normal pet dog will bite anytime if something is done that somehow causes the dog to have a reaction. We don’t know the history of the dog before Daniella got it. That could be mean everything in this case.”

Marits said that he planned to file a complaint with Fairfax County leaders due to questions over how it was determined to classify Draco as dangerous and to call for a hold on the euthanization.

"I simply don’t want to see a perfectly good dog euthanized because of mislabeling," he said.

With Draco now just days away from possibly being put down, Daniella Bizzoco said she would keep fighting to keep her former dog alive.

"He is the sweetest dog," she said. "He doesn’t have a single mean bone in his body. We want him back. We wouldn’t be fighting this hard if we didn’t.”

RELATED: DC dogs are accidentally getting high on discarded joints they eat during walks