COLUMBIA, S.C. — April in Gandy’s Garden has been filled with many exciting success stories. While some winter plants have faded in the warmer weather, others are doing better than ever, and the summer garden is quickly coming together.

Share your garden stories with us on Facebook on WLTX Gandy’s Gardener’s, and they may end up on TV.

April marked the end for the Collard Greens and Parsley I planted in the garden back in October. The Arugula and Spinach were planted from seed in mid winter and they are also beginning to flower and lose their flavor. April doesn’t mean the end for leafy greens though.

I planted Romaine Lettuce in March and the leaves are in their prime right now. Although March was very warm, April temperatures have been running close to average and multiple nights in the 40s has kept the lettuce from forcing flowers prematurely. The mild April has also made for an incredibly healthy Swiss Chard plant! The plant has leaves measuring 2 to 3 feet long. The Swiss Chard is the only leafy green from Fall that is still doing its best in our spring garden.

The clear winner in the spring garden are our snow peas. They have grown more than 5 feet since March. The seeds were planted in Early February, and have been showing off with beautiful blooms and tasty beans ever since. Peas are an edible plant that functions as a beautiful vine.

A surprising, non-edible, plant find in the spring garden are mums. We purchased mums in September and the mild winter kept them green and happy ever since. What I wasn’t expecting was blooms in April! So before you get rid of your mum plants in the winter, consider keeping them around. It could be worth your while! 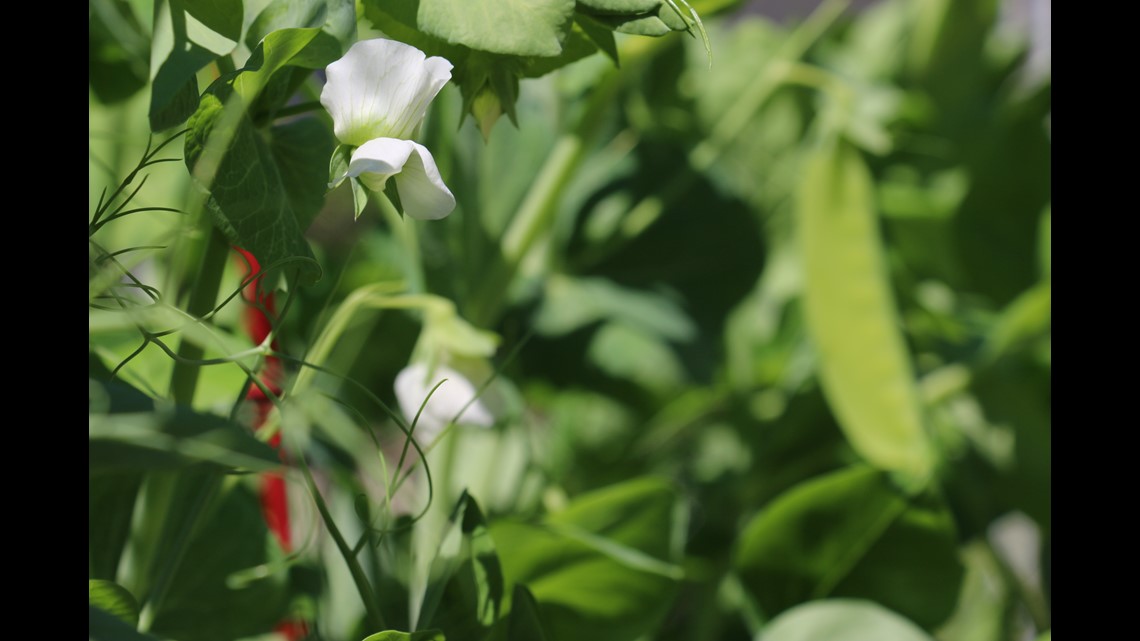 I started a few summer plants early this year. I planted tomato and eggplant seedlings from a local nursery in late March and I also planted tomato and eggplant seeds in the ground around the same time to compare which do better throughout the season. The tomato seedlings are still small and, unsurprisingly, the eggplant seedlings are just sprouting (eggplant takes about 6 weeks from seed before they can be transplanted from small pots to the garden). The eggplant and tomatoes from the nursery have doubled in size during April and are blooming. We even have 2 tomatoes, a hopeful sign of a productive season to come!

If you’re looking for quick growing produce from seed, consider squash. Our squash plants were ready for transplanting in the garden from seed in 2 weeks. I started them from a seed pack I purchased last year which saved me a lot of money since most nurseries will sell squash plants at $1-5 dollars per plant!

Stay tuned because there’s a lot that can be planted in May.