Poinsettias are the most sold flowering plant in the United States and it all started with a South Carolina man in the 1820s. 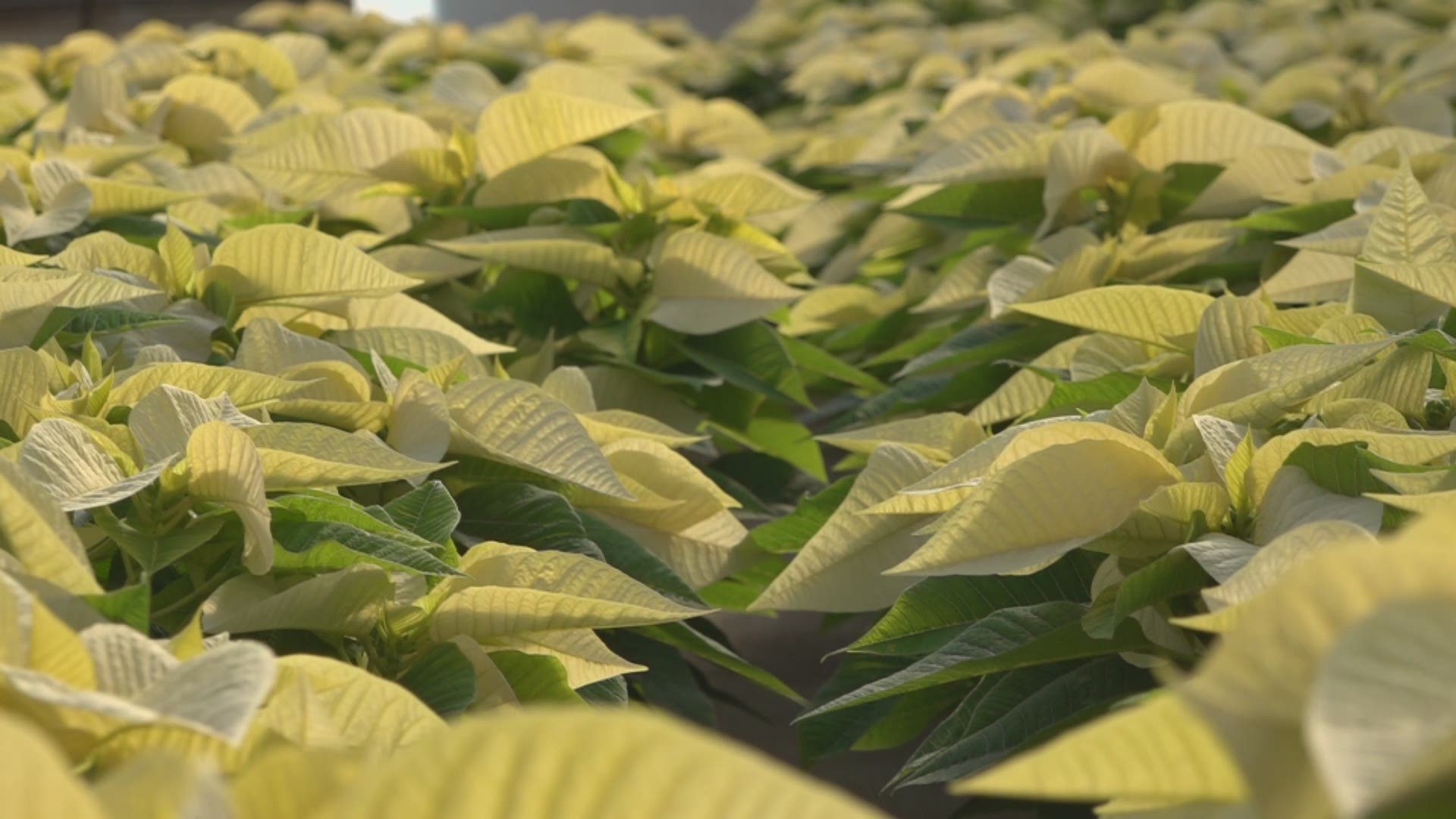 COLUMBIA, S.C. — December 12th is National Poinsettia Day in memory of the South Carolina man that started our country's love for the holiday flower: Joel Poinsett

More than 80 million poinsettias are sold each year, which makes them the most sold flowering potted plant in the country (by a large margin!). It's an impressive feat considering consumers only buy poinsettias for about 6 weeks each year, from late November through December.

Bruce's Greenhouses in Blythewood, SC grow more than 20,000 poinsettias each year. They start their plants from cuttings in July because it takes at least 4 months for the plants to grow enough to sell. Bruce's Greenhouses primarily sells to other local nurseries and special orders, and there's no shortage of poinsettias around the country this time of the year.

Poinsettias weren't always a Christmas plant. The plant was introduced to the United States in the 1820s when the first minister to Mexico, Joel Poinsett, brought a few cuttings of wild poinsettias growing in Mexico with him to his home in Greenville, SC. Joel Poinsett passed away in Sumter County on December 12, 1851. The day became known as National Poinsettia Day after the flower which was named in his honor.

It wasn't until a century later that poinsettias started to gain notoriety for their holiday pizzazz. In the wild poinsettias are tall and lanky and only hold their color for a few days, but advancements in breeding perfected the plant for the holiday season. Researchers with the United States Department of Agriculture continued to improve on the plant's resilience. Today poinsettias come in 100s of shapes and colors and reliably hold their color through Christmas and New Years.

Josh Bruce, the general manager of Bruce's Gardens knows exactly what it takes to get poinsettias blooming just in time for the holidays. He says the blooms aren't what attract people's attention, it's the bracts that surround the flowers. Bracts are the name for the colorful cluster of leaves that surround poinsettia's humble yellow flowers.

If you're looking for the perfect poinsettia, keep a close eye on the yellow flower in the center. If it appears brown, the colors on the plant will start to fade soon. Yellow blooms in early December are perfect timing for a vibrant Christmas plant and green buds are a sign that the best color may still be yet to come.

Can poinsettias re-bloom next season? That's the question Bruce's Greenhouses hear the most.

Poinsettias will re-bloom each winter with the right care. After the holidays poinsettias will start to lose their colors. Even healthy plants will revert back to green when they're not in bloom. Poinsettias are tropical plants and will need to be kept as houseplants in South Carolina during the winter. They may lose leaves, but will quickly regrow them if they're placed outside in the spring.

In the summer, leave poinsettias in a spot that receives some afternoon shade and treat them like any other plant. They can be cut back in July to encourage more branches.

When the days get shorter, poinsettias need less daylight, otherwise their blooms won't be triggered. If they're left in a room with no artificial light, they'll naturally start to show their color just in time for the holidays.