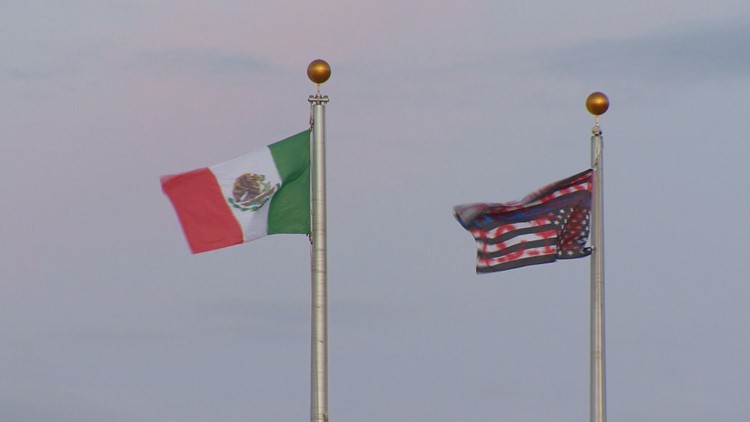 AURORA, Colo. — Aurora Police Department Chief Nick Metz issued a lengthy statement Saturday explaining why officers didn’t intervene when a small group of protesters were seen removing multiple flags – including an American one – from the front of the Immigration and Customs Enforcement (ICE) detention center in Aurora Friday night.

“The decision to not intervene at the time was based on protecting the safety of the large majority who were acting peacefully, and the safety of the officers,” the statement reads. “Our folks were more than ready to decisively engage had we witnessed assaultive behavior or damage to the building or surrounding property that could jeopardize its security or public safety.”

Metz estimates that between 1,500 and 2,000 total people attended the protest, which split into separate groups over the course of the night. Organizer Lights for Liberty continued with several planned speakers, while another large group left the public street and entered the grounds of the detention center itself, which is federal property.

After lowering the flags, the protesters replaced them with their own. That included a Mexican flag and another that looked like an upside-down spray-painted thin blue line flag that Aurora Police Department spokesperson Crystal McCoy said was presumably brought by an attendee. According to the statement from Metz, a third flag read “f*#& the cops.”

“Beyond the removal, attempted destruction of the U.S. flag, replacement of the flags, and some signs and poles being put on the main doors and windows, the protesters did not engage in behavior that warranted immediate intervention,” Metz’s statement reads.

Metz said before the protest, APD recommended that ICE staff install “water-filled barriers to prevent vehicles and pedestrians” from entering the grounds, and “it seemed from the conversation that they were planning to take our advice.”

In the statement, Metz claimed ICE officials placed “several traffic cones, along with some light-weight yellow plastic chain that was taped to the cones instead of the water-filled jersey barriers we had strongly recommended.”

“Attached to the makeshift barrier was a small sign that basically said in English and Spanish, ‘private property, no trespassing,” Metz wrote. “You can imagine this did nothing to prevent and/or stop one person from entering.”

Metz said officers ultimately communicated with the group organizing the protest, who urged attendees to leave.

Those who chose to stay ultimately held their own version of a candlelight vigil. Eventually, everyone left the detention facility around 9:30 p.m.

Once the crowd cleared, officials from inside the ICE facility came outside to replace the flags and clean up the items left behind by protesters.

Metz said investigators will be reviewing surveillance video in hopes of identifying the people officers say were engaging in criminal behavior. Anyone with cellphone video of the event is asked to call apdcrimetips@auroragov.org.

Gov. Jared Polis (D-Colorado) acknowledged the protests in a tweet, writing “of course I condemn the desecration of our flag, who wouldn’t?”

“Now will you condemn the ongoing and even more serious offense to our flag and values of putting children in cages and tearing families apart?” he tweeted.

The Colorado Immigration Rights Coalition issued a statement about the incident, calling the people responsible for removing the flags “rogue protesters.”

Read the full statement below:

We unequivocally denounce the actions of rogue protestors who stormed the for-profit detention camp and replaced the American flag with the Mexican flag yesterday. These protestors put the undocumented families who were attending a peaceful vigil at the same location in danger of being arrested and caused harm to the immigrant rights movement.

Let us be very clear: the rogue protestors who stormed the GEO for-profit prison for immigrants located in Aurora are not affiliated with the Colorado immigrant rights movement. Instead, they represent a rogue group who ignored the plans they themselves coordinated with our Coalition.

As a result, the attention has shifted away from how for-profit corporations make billions in profit from the increased criminalization of our communities and militarization of our borders.

Instead of talking about how our communities came together last night and raising awareness of all of the nationalities and ethnicities of the people abused in the prison camps, the conversation turned into a divisive one that pits the communities we love against one another.

The Colorado Immigrant Rights Coalition and our 94 member organizations across the state of Colorado will continue to center the struggle for immigrant rights on the lived experience and stories of those directly impacted who continue to fight to live united and free with their families and our community.

The Colorado GOP also condemned the protesters in a statement distributed to media on Saturday afternoon.

"The desecration of our American flag by extreme anti-ICE protesters should outrage every patriotic American, regardless of party," said Colorado GOP Chairman Ken Buck in the statement. "Every single Democrat, including those running for president, should immediately denounce this deeply anti-American act."

"Likewise, condemning the hostile raising of a foreign flag over a law enforcement facility should not be controversial. I hope Colorado Democrats will join us in forcefully repudiating these disgraceful acts."

The Aurora Police Department said no one was injured or arrested during the protests, which are ahead of potential nationwide immigration raids this weekend.

The raids, which federal authorities refer to as targeted enforcement, are scheduled to begin Sunday, two senior Department of Homeland Security officials told NBC News. The raids were originally scheduled to happen three weeks ago, but were postponed by President Donald Trump.

The mass raids, to be conducted by Immigration and Customs Enforcement (ICE), are set to target roughly 2,000 people with final orders of removal, including families whose immigration cases had been fast-tracked by judges. They will take place in the same 10 cities that were revealed under the previous plans, the officials told NBC News.

ICE would not confirm Denver was among the cities due to safety of personnel.

ICE said in a statement that they prioritize the arrest and removal of "unlawfully present aliens who pose a threat to national security, public safety and border security." They also said anyone in violation of immigration laws is subject to arrest and removal from the U.S."

This is not the first operation of its kind: Similar raids have been conducted regularly since 2003, often producing hundreds of arrests, according to the Associated Press.

Local immigration attorney David Simmons said it is legal to conduct the raids: "The Immigration Nationality Act allows Immigration and Customs Enforcement to enforce the immigration laws, and if an individual is in the United States in violation of those laws, they have the right to arrest, detain and remove those individuals."