Opposing coaches team up, help FHC boy with Down Syndrome realize dream of scoring a touchdown

Clay Udell has Down Syndrome and wanted to know what scoring a touchdown felt like. Thanks to the head coaches at Northview and Forest Hills Central, he knows. 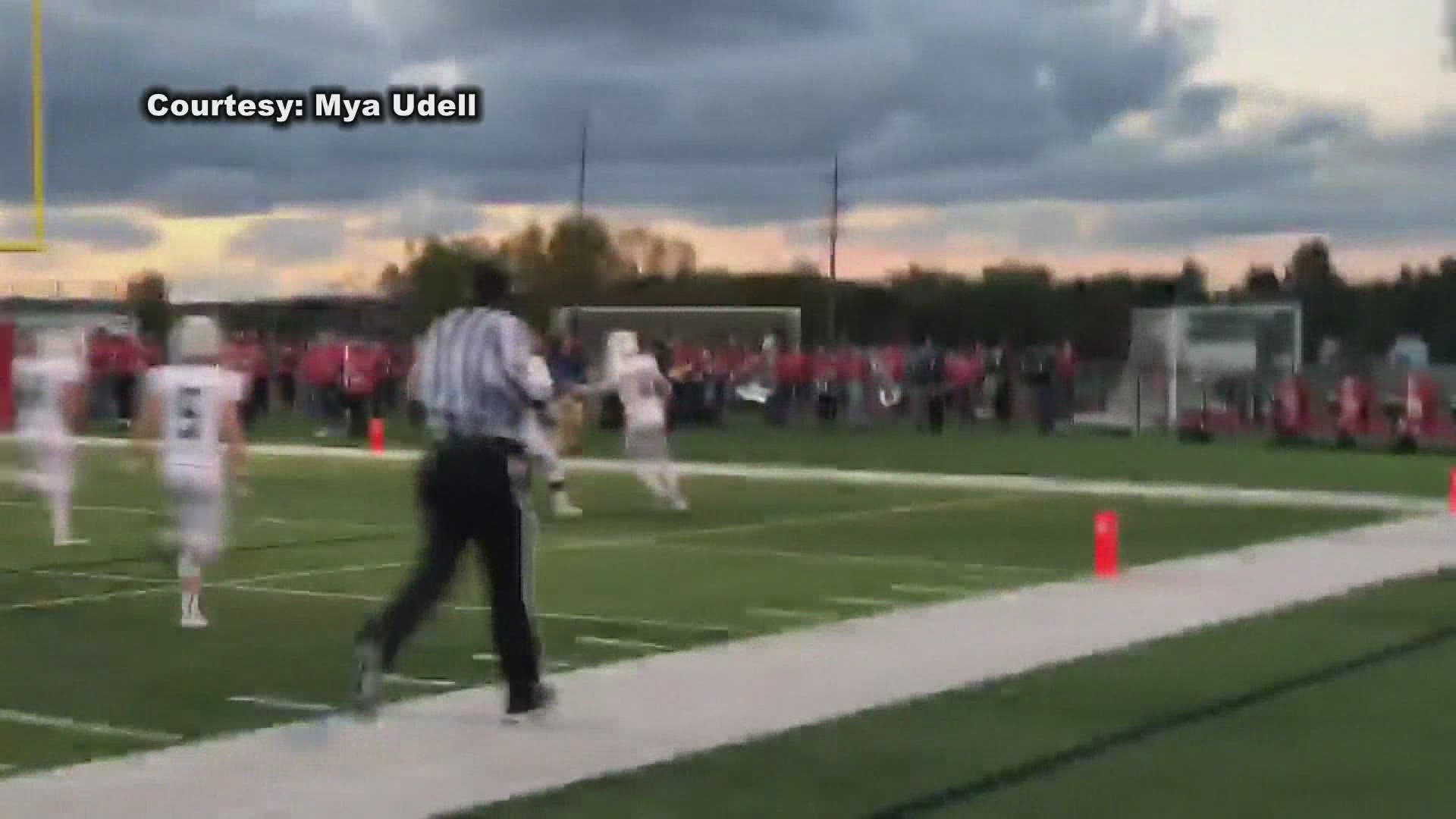 ADA, Mich — A touchdown in football is worth six points, but for the Forest Hills Central team Friday night it was worth so much more, after the opposing coaches teamed up to help a student with Down Syndrome make his dream a reality.

Clay Udell is widely considered to be Forest Hills Central's biggest sports fan. Clay can be found attending and helping at most of the school's athletic events.

"Clay was 3 years old when I became athletic director," said Clark Udell, Clay's father, and FHC's athletic director since 2005. "His favorite sport has always been football; he's on the sideline for every game."

Clark says Clay has always talked about getting into a game, but the idea never went further than a passing conversation, until last week.

As Forest Hills Central was getting ready to prepare for its road game at Grand Rapids Northview, Rangers head coach Tim Rogers reached out to Wildcats head coach Trip Gallery with an idea.

Gallery, who was the offensive coordinator under Rogers at Forest Hills Central, before leaving in 2017 for Northview, agreed to collaborate.

"A few days before the game, Coach Rogers came up to me and said, 'Hey, we got something going and you have no say in the matter,'" said Clark. "Coach said to make sure Clay is at practice on Wednesday and also be present at Thursday's walk-through."

Clay was given pads and a jersey. The FHC helmet he wore belonged to his brother Seth, who was a member of the 2018 Ranger team that lost in the state semifinals.

"Clay felt like one of the players on game day," said Clark. "He got to ride on the bus with the team to Northview, and when he got there, participated in all of the pregame activities."

Because Clay isn't eligible to play in an MHSAA game, Tim Rogers and Trip Gallery agreed that before the opening kickoff, there would be one untimed down, allowing for Clay to experience his big moment.

Clay ran on the field with the team. Northview's defense was made aware of what was about to happen.

"The whole Udell family, aunts, uncles, grandparents, were all on the sideline watching," said Clark. "We knew that it was going to happen at the one end zone."

The two teams lined up. Once the ball was snapped, it was handed off to Clay, who broke loose off right tackle and ran with the ball 40 yards for a touchdown.

"My whole family was cheering me on," said Clay. "I went out there and got that touchdown."

Credit: Clark Udell
Clay Udell may has Down Syndrome. He also got to experience a high school touchdown, thanks to opposing coaching teaming up for him.

When Clay crossed the goal line, he took a knee. The Northview band started playing the Forest Hills Central fight song for him, and within seconds, the entire FHC team mobbed him as though he'd just scored to win the state championship.

"Thanks to coach Rogers and Trip Gallery for getting this touchdown for me," said Clay.

"For those two guys to set something up for Clay, knowing how much both of them think of Clay, just took my breath away," added Clark.

Even though the touchdown didn't count on the scoreboard, Clay didn't care.

"It counted for me," said Clay.

The moment also served as a reminder to us all that there's always something bigger than the game.

"Scoreboards matter at the end of games," said Clark. "But there's so much more that happens in high school athletics than what the scoreboard tells you."