Jeremy Barret, 58, was one of several injured during the Bike the Bluff Road Race when investigators said a suspect plowed into a group of cyclists. 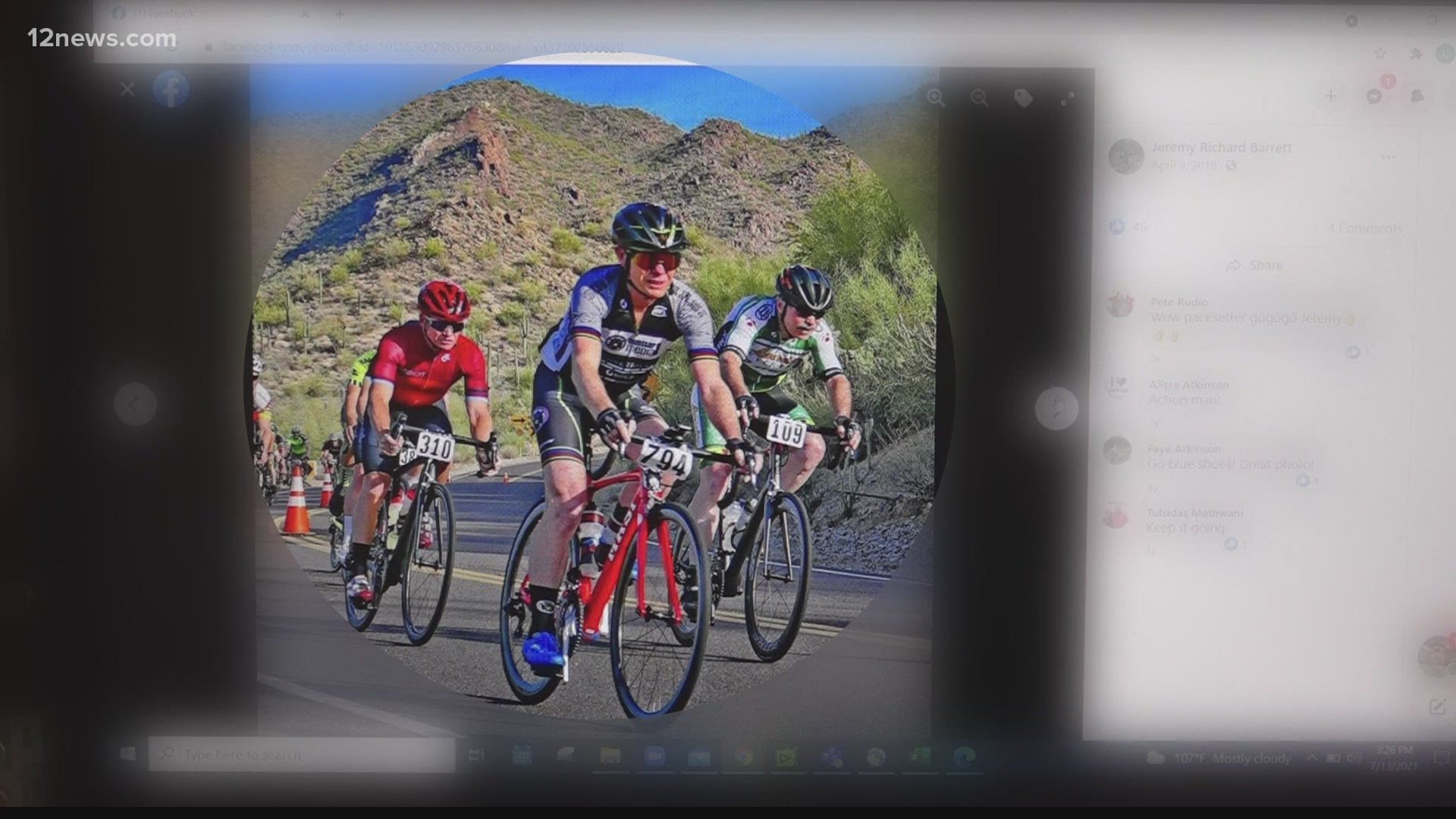 SHOW LOW, Ariz. — A man injured in Show Low last month while competing in a road race has died.

Jeremy Barret, 58, was one of several injured during the Bike the Bluff Road Race when investigators said a suspect plowed into a group of cyclists.

In total, police said seven people were taken to the hospital.

Friends describe Barrett as a kind, generous individual in the Tucson cycling community.

“Jeremy was just the kind of person that you would want to be around,” Kathryn Bertine said.

Bertine said when she was new to the sport, Barrett was very welcoming.

That was Joey Iuliano’s experience too.

“Quick to offer some words of encouragement, or if he saw a new rider on the ride he would make sure to ride up next to them and welcome them to the group,” Iuliano, who’s the president of the Arizona Bicycle Racing Association, said.

Friends said Barrett was often selfless, as evidenced when paramedics were tending to him after he was hit during the Bike the Bluff Road Race in June.

“What I was told by another rider who was there is that even as the paramedics were working on him, he was asking how his friends were, you know, ‘Are they OK?’ He wasn’t really concerned about himself he was concerned about the others,” Iuliano said.

On Saturday, June 19, investigators said 35-year-old Shawn Chock ran into a group of cyclists with a truck as they begun the Bike the Bluff Road Race.

Investigators then said Chock fled the scene, away from police, where they said he resisted arrest. Chock was shot by police and taken to the hospital.

Chock has since been indicted on 11 counts. Nine of the counts are for aggravated assault, the other two counts are leaving the scene of an accident and unlawful flight from a law enforcement vehicle.

According to Navajo County Sheriff’s Office inmate records, Chock is still being held in jail. Court records detail he’ll be in court on Monday.

12 News contacted Chock’s attorney, Hunter Lewis, who said he did not have anything to say regarding the case or Barrett’s death.

12 News did contact the Navajo County Attorney’s Office regarding if charges would be altered to reflect Barrett’s death, but we have not heard back.

“Jeremy wasn’t just a cyclist he was also a friend, a father he was a boyfriend and he was such an important part of our cycling community,” Bertine said.

RELATED: 'He could’ve killed some people': Suspect believed to have hit group of cyclists in Show Low identified

A GoFundMe has been started to help care for all of the victims who were injured in the incident.

As of Tuesday, more than $103,000 had been raised to help the victims and their families.

Tucson cycling community members tell 12 News they are planning a memorial ride for Barrett. A date for that ride is still being worked out.

Barrett died Saturday after battling injuries sustained from the incident in June.

His family released a statement regarding Barrett’s death, which reads:

“On July 10th our dear youngest brother Jeremy succumbed to his injuries sustained in the June 19th Bike the Bluff incident.  Jeremy fought bravely, enduring multiple resuscitations and extensive surgeries for massive internal injuries and broken bones. He passed away with his visiting 90 year old Mother, brother and devoted Girlfriend at his bedside to bid him farewell. His devastated mother had travelled alone all the way from Zimbabwe to visit her youngest son on a gifted air ticket, with minimum funds. She has been traumatized beyond belief,  and, as a non US citizen on a visitors visa, alone, penniless and with no legal standing, (but embraced and cared for by the Angel that is the girlfriend,) who has taken her under her wing. Subsequently, her other two sons have made their way to Arizona from Africa to emotionally support her. We have been horrified to hear that the perpetrator of this shocking event is a repeat offender  with a string of of crimes to his name, and was behind the wheel again. We would like to thank the absolutely outstanding medical team at Flagstaff Medical Center Surgical ICU for their professional, tireless and compassionate care of Jeremy.  They kept us informed over the past agonizing three weeks as Jeremy’s condition went up and down on a daily basis.  We would like to also thank Jeremy’s company Apache Nitrogen Products and his many cycling friends in Tucson and across the state for their ongoing love and support.  We have been staggered by the incredible acts of kindness and caring that have come our way and our sincere appreciation goes out to these wonderful people.

Jeremy was a brilliant, kind and generous individual with an infectious positive attitude, always encouraging others and always tried to live his life to the fullest.  Whether he was at work, on a bicycle or sailing, he was a shining and inspiring light in this world who will be sorely missed by many, not just in Tucson, but across the whole world.”