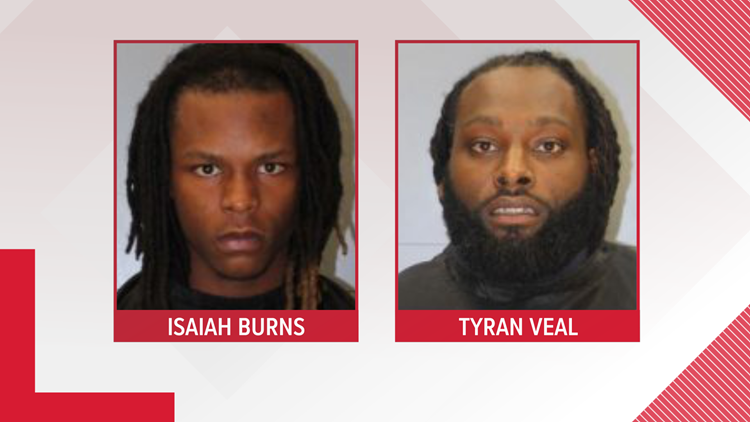 COLUMBIA, S.C. — Two men have been charged in connection with a drug deal happened on the grounds of a Columbia elementary school.

A judge set Veal’s surety bond at $10,000. At last check, Veal was still detained at the Richland County Detention Center.

Isaiah Burns, 21, was arrested Thursday and charged with grand larceny and possession of a firearm by person convicted of a violent felony.

A judge set Burns bond at $50,000 and placed a detainer hold from the South Carolina Department of Probation, Parole and Pardon Services (PPP).

According to law enforcement, the pair was involved in a drug transaction at approximately 4:30 p.m. behind 111 Garden Drive, near Burton-Pack Elementary School, on September 11.

Veal is accused of possessing 60 grams of marijuana and trying to sell the drug to Burns. Officers initially responded to the incident location after Veal reported being robbed at gunpoint. Burns is accused of taking Veal’s firearm, drugs and approximately $2,100 in cash during the prearranged meeting.

Some of the items seized following what police say was a drug deal at Burton-Pack Elementary School.
Columbia Police Department

Burns is prohibited from possessing a firearm due to a 2018 conviction from a Assault and Battery of a High and Aggravated Nature.

Both are housed at the Alvin S. Glenn Detention Center.