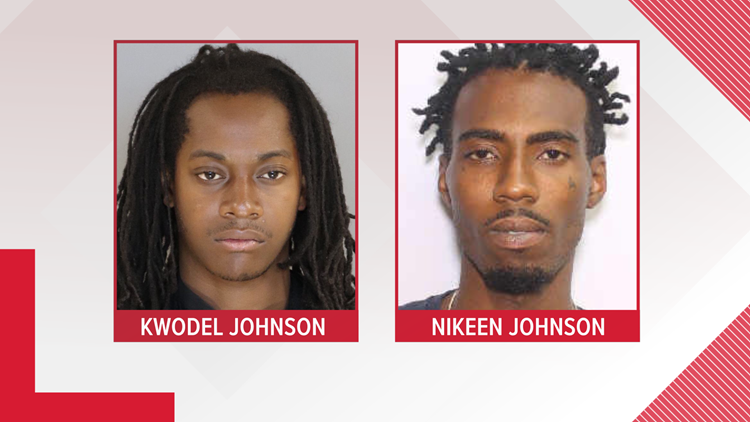 One suspect arrested, one wanted in shooting of 7-year-old girl, police say

SUMTER, S.C. — One man is in custody and another is actively being sought for their reported involvement in the shooting of a family in Sumter.

The shooting happened Friday night around 8 p.m. and involved a 7-year-old victim. A second child, 6, was not injured. The victims are still receiving treatment.

Accoridng to law enforcement, Kwodel Johnson and Nikeen Johnson, both 25, fired multiple shots at the family while at the family’s residence in American Mobile Home Plaza off of Broad Street in Sumter. They fled the scene.

According to law enforcement, the two are cousins.

The shooting happened during a verbal dispute between the adult residents and the two suspects, who knew each other, officers say.

Kwodel was arrested Tuesday morning in Orangeburg. Nikeen is still being searched for and should be considered armed and dnagerous, according to deputies. Both face four counts of attempted murder. Other charges are pending.

“There could have been multiple deaths that night,” Sheriff Anthony Dennis said. “The number of victims could have easily been four or more because the shooting took place in a residential area and neighbors were home at the time,” he said.

“Not only did the suspects shoot at two unarmed adults but there were two children in the house,” he said. “We will not tolerate thugs threatening the lives of our citizens, especially our children.”

“There will continue to be aggressive enforcement throughout the county for anyone who acts so recklessly with someone else’s life,” he said. “A family has been traumatized by this incident and the two children will have to live with these mental scars.” Dennis said. “One child will also have physical scars from this.”

Anyone who knows of Nikeen Johnson’s whereabouts should call Sumter County Sheriff’s Office at (803) 436-2000 or Sumter Crime Stoppers at (803) 436-2718. Anonymous tips can also be submitted electronically by going to www.p3tips.com.