In South Carolina, lawmakers have a bill ready to go on to the senate that could mandate public and charter schools to display "In God We Trust" posters in classrooms. 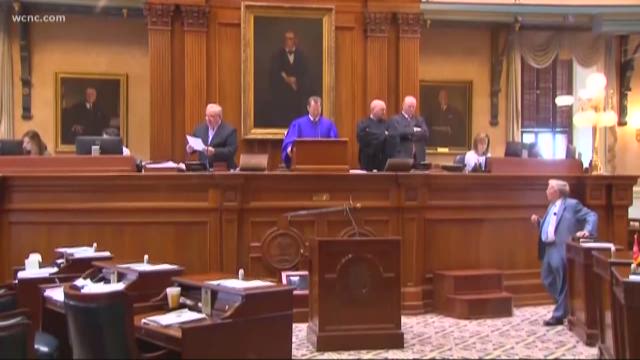 Rock Hill, SC (WCNC) - In South Carolina, lawmakers have a bill ready to go on to the senate that could mandate public and charter schools to display "In God We Trust" posters in classrooms.

Representative Mike Burns is pushing to receive a hearing the week after Easter. If lawmakers don’t receive the hearing, then the bill will be recycled until 2019.

RELATED: SC lawmaker pushes for "In God We Trust" posters in public schools

Lawmakers in other states have seen similar bills.

Schools in Arkansas have already been given the green light to put the posters up. There was a mandate that all materials would have to be donated, which was then done.

Lawmakers in Florida are heavily pushing for this poster bill as well. Democratic FL Lawmaker Kimberly Daniels says, "God isn't a Republican, and He's not Democrat...He is the light, and our schools need light in them like never before."

Critics on the other hand are calling this a government a government endorsement of one religion. One mom telling NBC Charlotte, “I can see how it would offend other people non-Christian.”

Burns, who is behind the SC bill disagrees. “Just because someone references the name God doesn't mean that you are pouring religion over their head.”

North Carolina has yet to move the needle on this, but after speaking with Representative Pat Hurley, things may be moving come May.

“I think it's a great idea,” Hurley told NBC Charlotte about plastering “In God We Trust” posters on the walls of every classroom across the state. “It is our national motto.”

“Do you think this could be put into place,” I asked Hurley. “I think we need to do it, yes. And I think that we would,” Hurley answered. “I have not discussed it and did not know that was going on, but I'd be glad to talk with others and certainly make it happen when we get back in session.”

If South Carolina receives the hearing after Easter and passes the bill, all SC schools will see posters with “In God We Trust” on the front and the states motto, “While I Breathe, I Hope” on the back by the 2018-2019 school year.