ORANGEBURG COUNTY, S.C. — A Orangeburg County educator has filed a lawsuit against Gov. Henry McMaster, to prevent the state from distributing any “Safe Access to Flexible Education (SAFE) Grants”.

According to the release, a Circuit Court Judge in Orangeburg County signed a temporary restraining order to prevent the state from distributing the funds until a hearing Wednesday.

The Governor has a total of $48 million from federal CARES Act funding he can give out as emergency education relief as part of the Governor’s Emergency Education Relief (GEER) Fund.

The order comes as a result of Governor McMaster’s announcement on Monday that he intends to spend $32 million of the $48 million dollars on private school education in South Carolina. The funding will be used to give students a one-time, needs-based grant of up to $6,500 to help pay for their tuition.

Thomasena Adams is described in the order as a taxpayer who holds a Doctorate in Education, and someone who worked in public education for over 15 years.

Adams sued McMaster and Palmetto Promise Institute Tuesday, stating that it goes against Title XI, Section 4 of the South Carolina Constitution that states "No money shall be paid from public funds nor shall the credit of the State or any of its political subdivisions be used for the direct benefit of any religious or other private educational institution."

Working families in South Carolina are struggling to make ends meet during this pandemic and every parent should have the opportunity to choose the educational instruction that best suits their child's needs.  Federal coronavirus relief cannot, and should not, be denied to any citizen in need.

The plaintiff's attorney, Skyler Hutto, along with attorneys representing the State are expected to be heard in court next week concerning whether or not this order will become permanent.

The court filing is below: 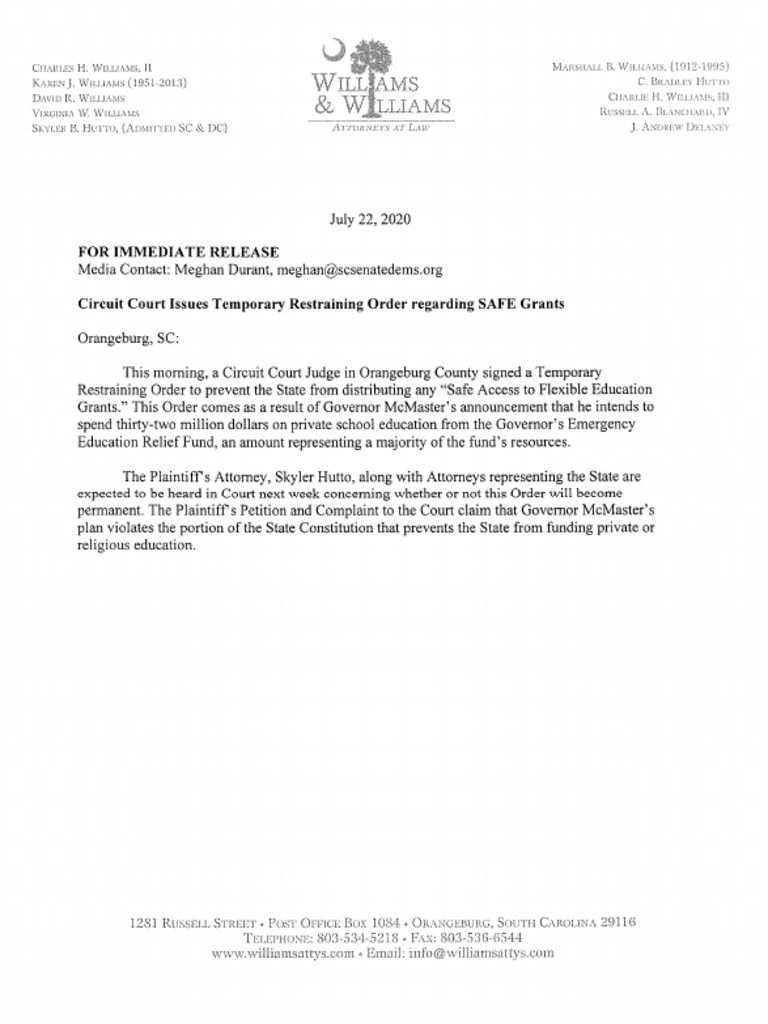