Beyonce and Jay-Z Concert in Columbia: the Duo Dazzles in South Carolina

Music superstars Beyonce and Jay thrilled in Columbia, as their 'On the Run II" concert tour made a historic stop in Williams-Brice Stadium Tuesday night. 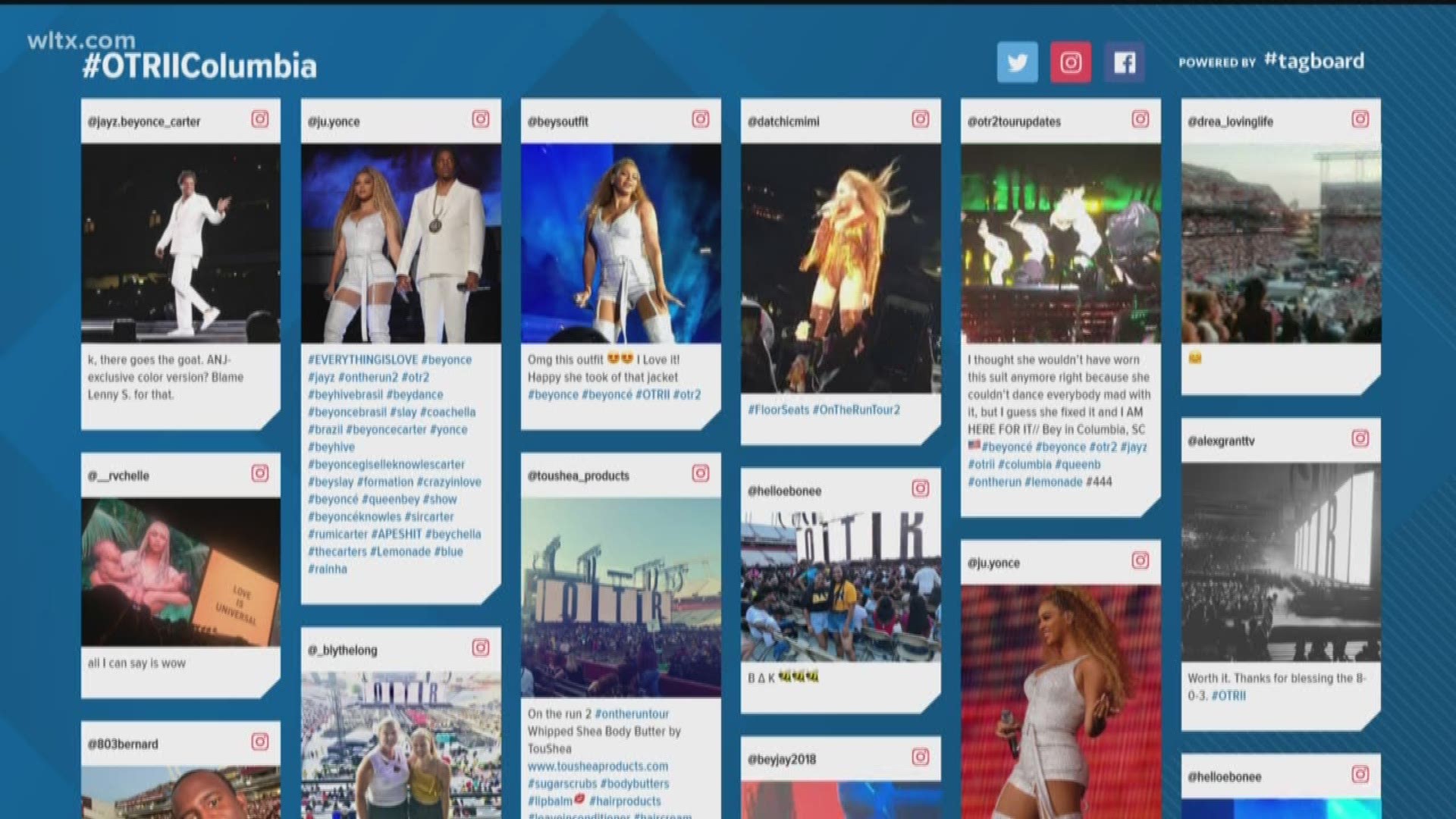 Columbia, SC (WLTX) - Music superstars Beyonce and Jay thrilled in Columbia, as their 'On the Run II" concert tour made a historic stop in Williams-Brice Stadium Tuesday night.

It become the talk of the town: tens of thousands showed up. The night started with performances from Chloe X Halle and DJ Khalid. But just before 9 p.m., the headliners took the stage.

Reading This on the App? This Story is Best Viewed on WLTX's Mobile or Desktop Sites - Click Here

And it delivered what most fans would have anticipated. Backed by a gigantic video monitor, the pair performed many of the hits that have made them among the most popular artists in the world over the last two decades. There were slow songs, fast songs, raps, dancing, and even inspirational quotes to get the crowd excited.

The two also received the key to the city from Columbia Mayor Steve Benjamin.

Related Coverage: Beyonce, Jay Z Get the Key to Columbia

We've collected just a small sampling of the social media posts that were sent, which give you a feel of what the fans inside saw.

This view also shows you how packed the show eventually got.

The #OnTheRun2 Tour was crazy in #SC tonight and #JayZ and @beyonce brought their A game to the city and the #Carters definitely did some Hits tonight in the city 🌃! #WHEREHOUSEENT #AGworld #carteblanchegroup #industrylife #SC #NC #ATL #LA #STL #Jayz #Beyonce

A post shared by WhereHouse Entertainment/Promo (@wherehouseent) on Aug 21, 2018 at 7:40pm PDT

Good news for fan! No rain before the end of the concert. The weather held off for the show. Looks like we may see rain, but not before midnight, says News19 Chief Meteorologist Jim Gandy.

RADAR UPDATE: The rain is mainly in the piedmont of South Carolina moving eastward at 25 mph. Still a chance of rain for Columbia mainly after midnight. #scwx #WLTX pic.twitter.com/0byK7ITb2d

9:51 P.M. - Beyonce and Jay Z getting a little help from the backup dancers

The couple knocked out one of their hits from early in their relationship, "'03 Bonnie and Clyde."

The video board, at one point, showed both of them holding their newest little ones: their twins.

A little taste of what the video monitors were showing the crowd during the Jay Z and Beyonce show.

The headliners, Beyonce and Jay Z, have started their performance.

We only invite the best to welcome #UofSC22. #OTRll #Gamecocks pic.twitter.com/8NdaV0qpy6

The young R&B duo came out to entertain the crowd early on.

7:57 P.M. - Here's another look at the setup inside Williams-Brice

Here's what it looked like inside Williams-Brice Stadium, before the crowd came in.

This was at the intersection of Rosewood and George Rogers Boulevard. Lot of cars.

At the intersection of Rosewood and George Rogers blvd and the traffic has gotten a little bit crazy! If you’re on your way to this area please be careful and expect delays @WLTX pic.twitter.com/IvCw0Lu1Ag

News19 Chief Meteorologist Jim Gandy says the latest high resolution model is indicating a chance for thunderstorms to move through the Columbia area after 10 p.m.

We'll continue to monitor thought the night. We could come through it with nothing. Still just a little tough to tell exactly which areas might be impacted.

Latest high resolution model indicating a chance for thunderstorms to move through the Columbia area after 10 p.m. Might be a threat to the concert at Williams-Brice Station. Stay tuned! #scwx #WLTX pic.twitter.com/7ykD9BWON3

Lots of people are on the COMET buses to shuttle over to the show.

News19 morning anchor Brandon Taylor says he saw the Beyonce motorcade come by the stadium around 5:30 p.m. The show is set to begin at 7:30 p.m., but that's just the opening acts. The main performance will start at least an hour later.

I can confirm @Beyonce motorcade just arrived at the stadium. pic.twitter.com/BLQVqg79b9

Speaking of parking and traffic, here's a map that shows the pre-show traffic flow.

For those head to #Beyonce and #JayZ #OTRII concert in Columbia, here's the pre-show traffic flow pic.twitter.com/vLB7RxONgj

Dozens of people took the Comet--the city of Columbia's public transit system--up on their offer to take a shuttle to the concert. The shuttle takes people from either the State Museum or the Lincoln Street Parking Garage to the stadium.

When we check in, there were plenty of people who hopped aboard.

This is QUITE the line for the Comet parking shuttle to Beyoncé & Jay-Z’s concert, we count more than 100 people! @WLTX pic.twitter.com/Sqh35ujW7s