For five decades he wondered if the man he saved had lived or died. See their emotional reunion 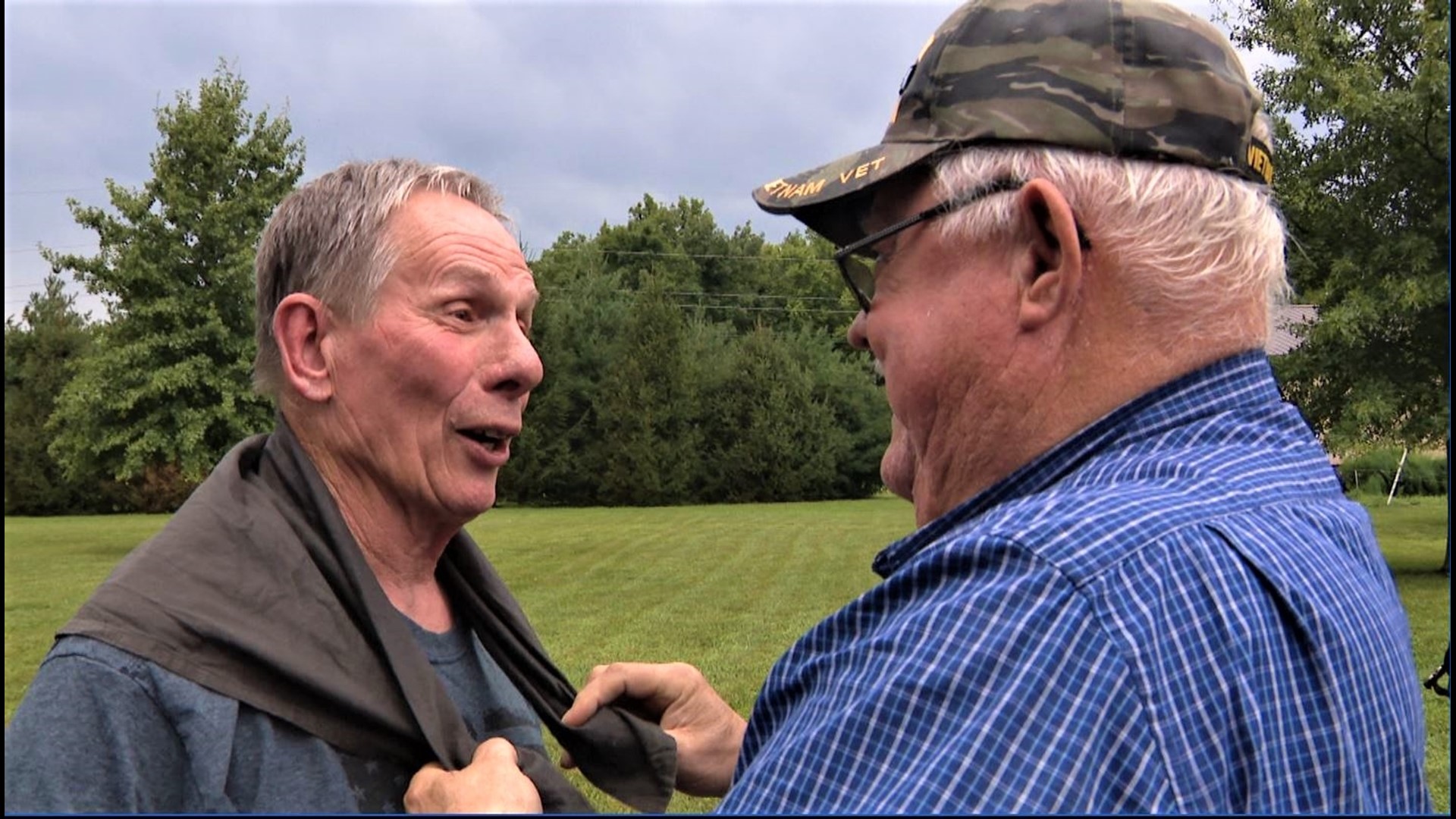 SARTELL, Minn. —
At a workplace with a reputation for giving fresh starts, Fred Kjorlien is known for his longevity.

“This is carbon fiber,” Fred says as he pulls the coarse fabric sleeve onto a mold of a prosthetic leg at Great Steps in Sartell.

It’s work he’s been doing for more than 50 years.

“When I started out, everything was wood — all the legs were wood,” Fred says. “But I guess when you're in any field for 50 years, things change, right?”

Then, Fred lifts his left pantleg to reveal his own prosthetic leg.

“We walked right into a big ambush,” he says. “That’s where I was wounded.”

The year was 1968, the deadliest for America's troops in Vietnam. Among them was Fred, a 19-year-old Minnesotan who had volunteered for service.

Fred was shooting from behind a tree when a rocket-propelled grenade exploded a few feet away, catching his exposed leg.

Fred doesn't remember much after that.

But 500 miles from Sartell, an Ashland, Illinois crop farmer hasn’t been able to forget.

“I didn't know if Fred lived or not,” Dale Edge says.

Dale was a 20-year-old draftee who barely knew Fred.

Though wounded himself by the same RPG, Dale took swift action.

He made a tourniquet from Fred’s pants to stop the bleeding, then helped load Fred on a helicopter.

The mental images of the gravely wounded soldier, with a missing leg and a ruptured stomach, would haunt Dale for the next half-century.

“I wanted to know if he made it or not,” Dale says. “You want to know the truth? I don't know how many times I prayed for that man and I didn't know him.”

Credit: Dale Edge
Dale Edge poses for a photo during his service in Vietnam

Dale traveled to the Vietnam Veterans Memorial in Washington D.C. His curiosity only grew when he didn’t find Fred’s name on the wall.

Fred was at work when the office phone rang.

Searching online on a new smartphone his children bought for him, Dale discovered Fred's name and photo on the Great Steps website.

“Totally out of the blue,” Fred says of the call.

Many gaps had remained in Fred’s memories of the day in Vietnam that had altered the course of his life.

Credit: Tom Stasiak, KSDK
For more than 50 years, Illinois farmer Dale Edge wondered if the solider he rescued in Vietnam had lived or died

After 53 years, a phone conversation wasn't going to suffice. Pulling a teardrop camper behind their Jeep, Fred and his wife drove 500 miles to Ashland for a reunion with Dale.

“How are you?” Fred asks Dale as the two approach each other, each smiling broadly, in the driveway.

Laughter and back slaps follow as the two Vietnam vets finally find themselves face to face, one owing his life to the other.

“Means a lot in here,” Fred says, his voice cracking as he touches his heart. “He's a comrade and I love him.”

Dale ties a black scarf with their battalion’s insignia around Fred’s neck.

Fred had been wearing an identical scarf when he was wounded. At the field hospital, the scarf had been cut off with the rest of his clothes and discarded.

“I didn't have one,” Fred says, his voice filling with emotion. “He gave me his.”

Before the men retreat to Dale’s dining room table to exchange photos and memories, Fred lifts his pantleg to show his friend his prosthetic leg.

What's found, can never again be taken away.

Boyd Huppert is always looking for great stories to share in the Land of 10,000 Stories! Send us your suggestions by filling out this form.