'I disagree with the governor:' Education superintendent says everyone should wear masks at school

The state is dealing with a debate over masks and a sharp rise in cases and quarantines in schools. 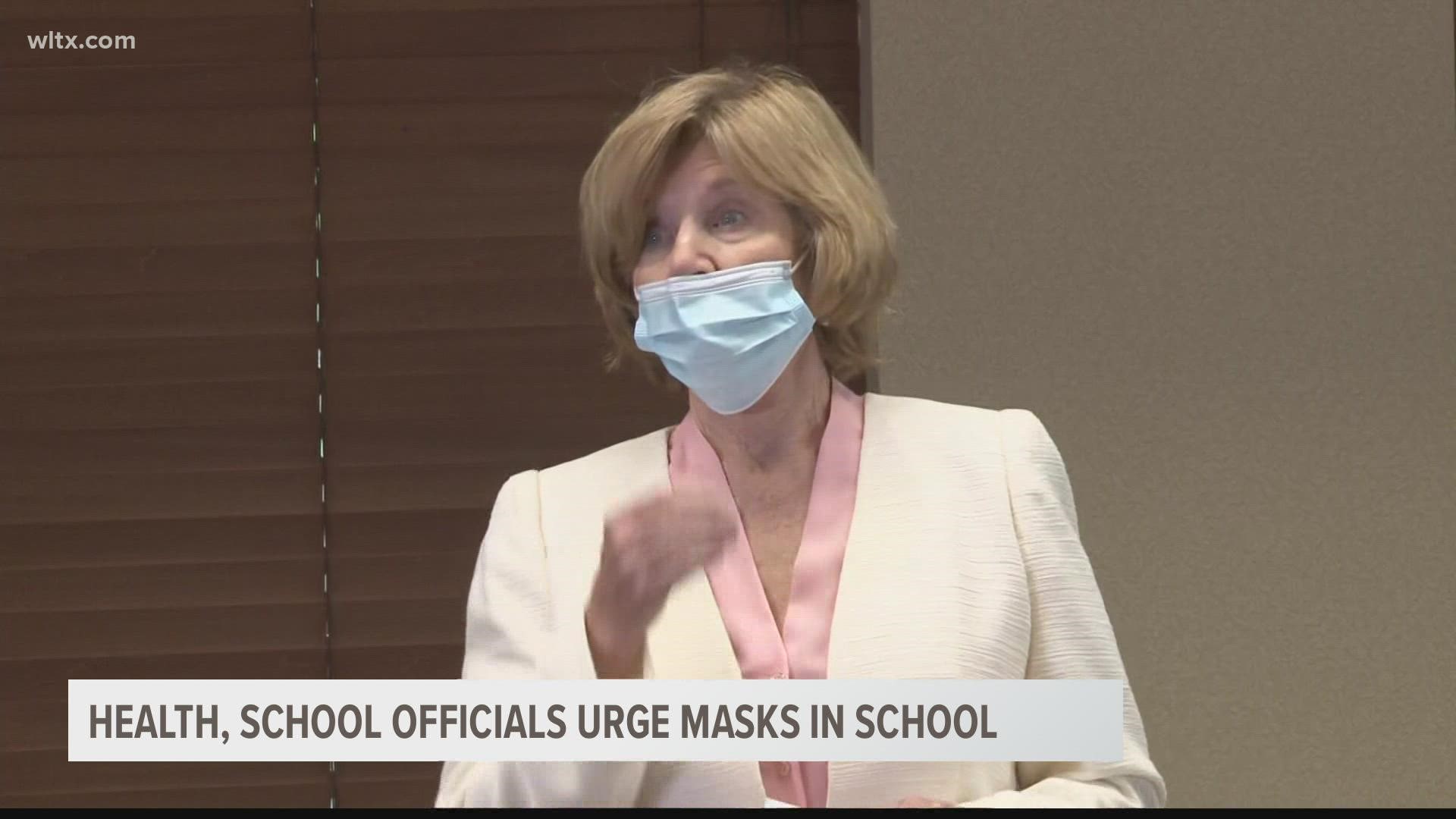 COLUMBIA, S.C. — South Carolina's education superintendent and a team of doctors and infectious disease experts say people must get vaccinated and kids should wear masks again in schools to get a handle on the virus.

State Education Superintendent Molly Spearman and State Epidemiologist Dr. Linda Bell, along pediatricians held a news conference Tuesday, as a debate rages with politicians over whether to mandate masks in schools.

"We're better than this, we're smarter than this," Spearman said in asking for everyone to do their part to stop the spread of the virus. "Parents please listen to your doctors. Let's not listen to social media."

Dr. Bell and the pediatricians said universal mask wearing is necessary. Spearman said it's time to listen to the experts.

"We have to do what's right," she said. "Or we'll be faced with a school year with avoidable interruptions and will be detrimental."

Monday night, the Richland County Council passed an ordinance requiring masks in all elementary and middle schools, as well a pre-k and daycares, in the county. The rule is nearly identical to one passed by the City of Columbia earlier this month.

Shortly after they took action, Richland School District One approved mandating masks at all schools, including high schools. Charleston County school district did the same.

RELATED: Richland District One to require masks at all schools

Those are believed to be the first school districts to go against a proviso written into this year's state budget the prevents school districts from mandating face coverings. It was passed back when COVID cases in the state were rapidly dropping, but as the July surge happened, people began to question the proviso.. This rule has led to a back and forth between parents, school leaders, and state leaders.

South Carolina Gov. Henry McMaster is strongly opposed to a mask mandate, saying a mask is a decision that should be left to parents alone. He says any attempt to violate the proviso is illegal, and the proviso specifically says school districts could lose funding.

Spearman said Tuesday she thinks it's up to the local school districts to decide on mask, but she's calling for the legislature to come back and remove the proviso. She said if they don't, this issue will likely wind up in court.

"I disagree with the governor on this," Spearman said about his stance on masks. "Look at the numbers. This is spreading among children where it was not before."

South Carolina Attorney General Alan Wilson has said the proviso is binding, and that Columbia's mask mandate violated the law, but so far has taken no action to prevent the mandates from being enforced.

Meanwhile, some school districts are already seeing problems with a return. The Pickens County School District already returned to temporary virtual learning after a high number of students had to be quarantined from close contact with kids who had the virus. And Kershaw County Schools had nearly 900 students in quarantine and over 140 who tested positive as of Tuesday morning.