Masks have been a point of contention as U.S. schools reopen amid rising numbers of coronavirus cases. 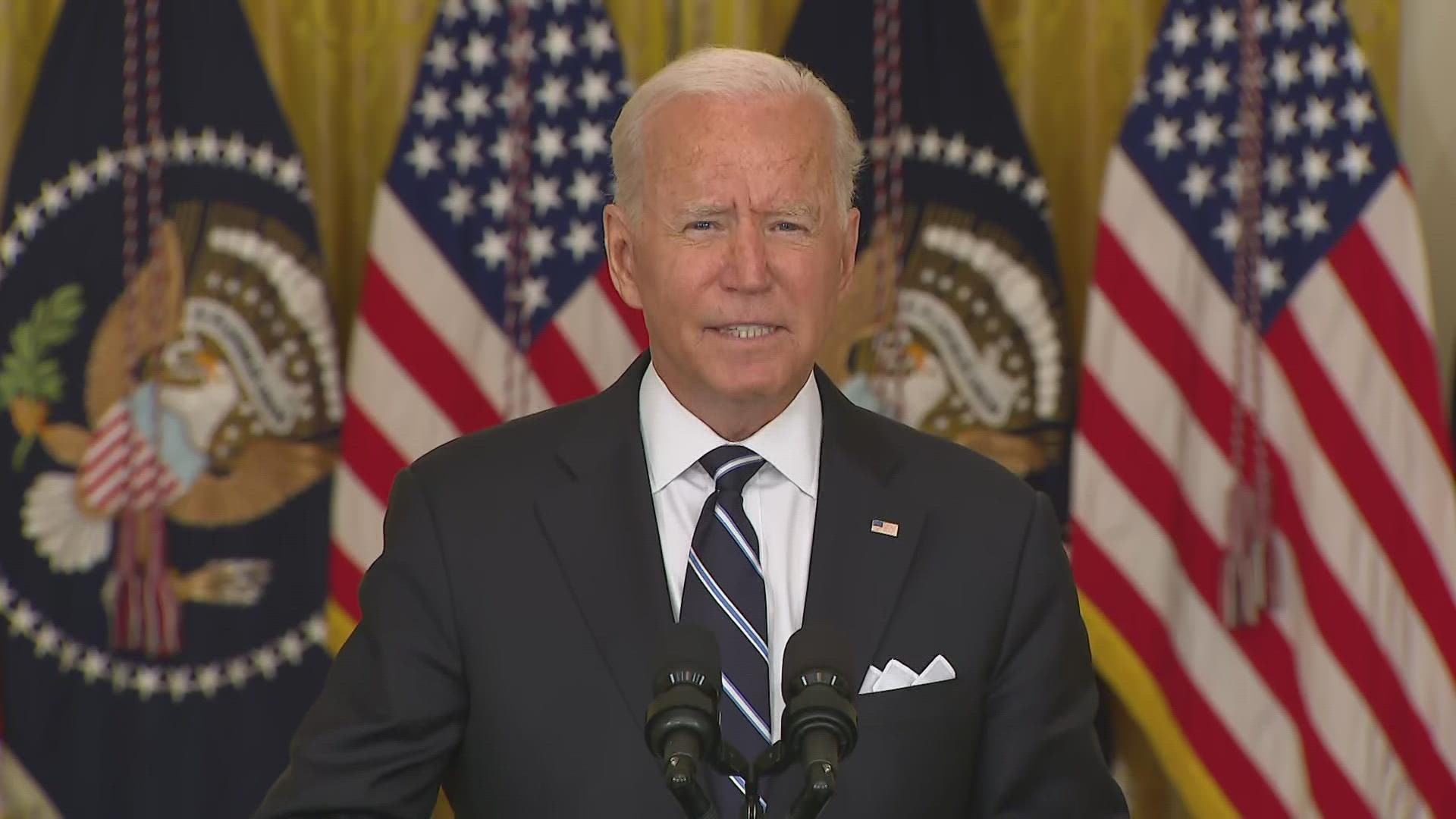 BOSTON — As COVID-19 cases surge around the country, a majority of Americans say they support mask mandates for students and teachers in K-12 schools, according to a new poll, but their views are sharply divided along political lines.

About 6 in 10 Americans say students and teachers should be required to wear face masks while in school, according to a poll from The Associated Press-NORC Center for Public Affairs Research. Similar shares say teachers and eligible students should also be required to receive a COVID-19 vaccine.

Masks have been a point of contention as U.S. schools reopen amid rising numbers of coronavirus cases. Questions about whether to require them have caused turmoil among parents and politicians, with some Republican governors banning mask mandates even as President Joe Biden threatens legal action against them.

In a reflection of that polarizing debate, the poll finds a wide partisan divide. About 3 in 10 Republicans said they favor mask requirements for students and teachers, compared with about 8 in 10 Democrats. There was a similar split over vaccine mandates in schools.

Some of the nation's largest school districts will require masks for all students and staff this fall, including in New York City. That’s fine with Budhiono Riyanto, 37, of Queens, who will be sending his 7-year-old son, Gabriel, back to school next month.

Others say masks shouldn't be forced upon children.

Kim Oldfield, who lives in rural Jessieville, Arkansas, said masks are unpopular in her area. She opposes the idea of a mandate and says it should be up to families to decide. In her local school district, masks are optional this fall.

“America is supposed to be the land of the free,” said Oldfield, 70. “And when the government starts getting into your personal life and making you do things that you don’t want to do, people don’t like that.”

Parents are slightly less likely to support mask requirements than the broader population, the poll shows. Fifty-two percent of parents with school-age children said they supported a mandate for kids, while 28% opposed it, with a similar split over mandates for teachers.

There were also differences by race: About two-thirds of Black parents said they back mask mandates for teachers and students, compared with about half of white and Hispanic parents.

The Centers for Disease Control and Prevention has recommended universal mask-wearing for teachers and students inside school buildings this fall, citing the rapid spread of the delta variant.

In some areas with school mask mandates, tensions have flared in recent weeks. Protesters opposing mask requirements have filled school board meetings from Maryland to California, in some cases disrupting meetings and forcing them to postpone.

Most states allow school districts to set their own mask policies, but some including California, Illinois and Louisiana are requiring masks for students and teachers statewide. At least eight Republican-led states have moved to ban universal mask mandates in schools, including in Texas, Florida and Tennessee.

In Land O’ Lakes, Florida, Gail Jackson worries about sending her 12-year-old grandson to a school where masks are optional. Her grandson, Zahkai, wears a mask, she said, but some of his classmates don’t.

“I don’t know how it’s all going to play out in the end,” said Jackson, 74, who is Zahkai’s legal guardian. “My prayer is that somehow or another, an angel passes over and these kids are allowed to grow and mature without finding themselves in a hospital on a ventilator.”

Compared to mask mandates, school vaccine requirements have been rare. Some states and local districts have required vaccines for teachers, saying those who refuse must face regular virus testing. Some others have taken a harder stance, including Washington state, which says teachers must be inoculated or face dismissal.

Last week, the Culver City Unified district near Los Angeles was believed to be the first in the U.S. to require vaccines for all eligible students this fall. But student vaccine mandates are still uncommon, and the shots are not yet approved for children below age 12.

The poll shows 59% of Americans support vaccination requirements for teachers and nearly as many — 55% — say the same for students age 12 and over, who are eligible to be vaccinated. Among parents, support was lower, with 42% backing vaccine mandates for students.

Jeff Hicklin in Falmouth, Maine, said he supports mask and vaccine mandates for teachers and eligible students. He says it's the best way to protect those who are too young to be vaccinated, including his 7-year-old son, Oscar.

“We need to do everything we can to keep schools open and safe,” said Hicklin, 40, an accountant.

In Menomonie, Wisconsin, Erik Pederstuen has been vaccinated and plans to have his 9-year-old daughter inoculated once she's eligible. But Pederstuen, a technical college instructor, said he doesn’t think coronavirus vaccines should be a requirement.

“I’m not an anti-vaccine person at all, I’ve just never liked the idea of it being forced,” said Pederstuen, 40. “I think everyone should get it, but I think it should be your choice.”