The attorneys general argue enforcing this policy through OSHA goes beyond the agency's typical power. 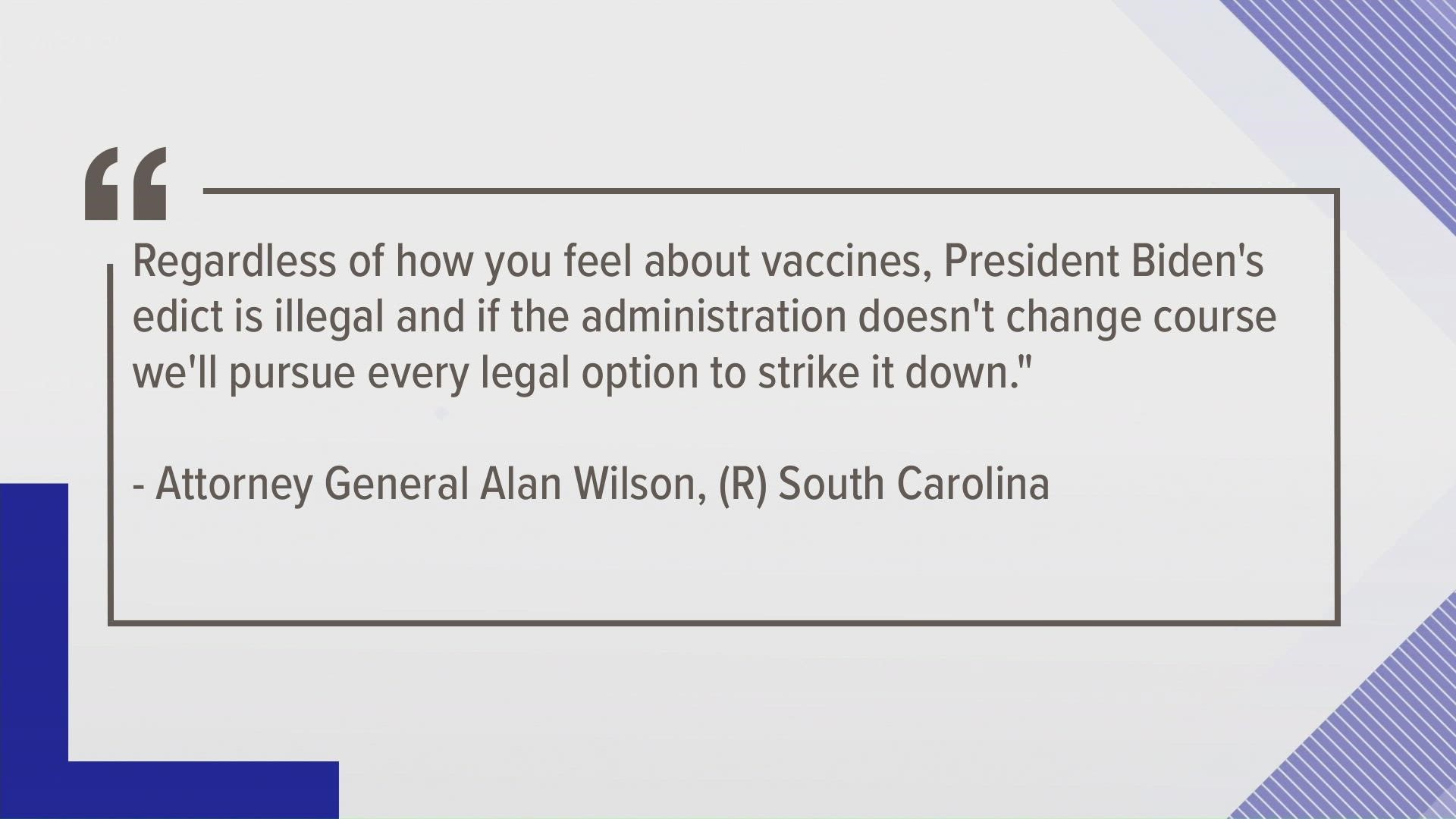 COLUMBIA, S.C. — South Carolina Attorney General Alan Wilson has joined 23 of his GOP counterparts in other states to threatening legal action against the Biden Administration over its proposed vaccine mandate for some businesses.

“Your plan is disastrous and counterproductive,” the prosecutors, led by Wilson, wrote in a letter sent to President Joe Biden. “If your Administration does not alter its course, the undersigned state Attorneys General will seek every available legal option to hold you accountable and uphold the rule of law.”

In the letter sent Thursday, the attorneys general argue enforcing this policy through OSHA goes beyond the agency's typical purview.

"When used in the context of a law directed toward occupational safety, the words 'substances,' 'agents,' and 'hazards' relate to the dangers presented by the job itself - for example, chemicals used at job sites and tools used to carry out tasks - not to dangers existing in the world generally," it states. "All of these provisions are most naturally focused on dangers occurring at work because of one's work, as opposed to dangers occurring in society generally, including at work."

The Biden Administration announced last week that the Labor Department is working to require businesses with 100 or more employees to order those workers to be fully vaccinated against COVID-19, or show a negative test result at least weekly.

The letter also highlights past instances in which emergency temporary standards issued by OSHA faced skepticism from courts. It states that between 1971 and 1983, the agency issued nine such standards, and six faced court challenges. Of those challenges, four succeeded in vacating or staying the standards, and one resulted in a partial stay, with one being fully upheld.

The agency has adopted only one other emergency temporary standard since 1983, which was issued in June this year and is currently being challenged, according to letter (citing the Congressional Research Service.)

The letter also argues COVID does not meet a "grave danger" standard, because those who have recovered "have obtained a level of natural immunity" and "young people without co-morbidities have a low risk of hospitalization."

It's still not clear exactly how long natural immunity following a COVID infection might last, or how strong it may be. It's also not clear why the hospitalization rates of younger people would preclude older workers from being deemed at "grave danger," or what hospitalization level exactly would constitute the standard.

The attorneys general believe their arguments would be well-received by the courts, citing a recent Supreme Court decision to end an eviction ban issued through the Centers for Disease Control and Prevention.

In response, Biden said the motivations of the attorneys general was political.

"Some of the same governors attacking me, are in states with the strictest vaccine mandates for children attending school in the entire country," Biden said. "For example, in Mississippi, children are required to be vaccinated against measles, mumps, rubella, chicken pox, hepatitis B, polio, tetanus, and more. These are state requirements. But in the midst of a pandemic that's already taken more than 660,000 lives, I propose a requirement for COVID vaccines, and the governor of that state calls it quote a tyrannical type move? This the worst kind of politics. Because its putting the lives of citizens in their states, including children, at risk. And I refuse to get into it."