A Spartanburg County restaurant is refusing to obey the governor’s order that all employees and customers must wear a mask inside, unless they are actively eating.

SPARTANBURG COUNTY, S.C. — The owner of a Spartanburg County restaurant who decided they wouldn’t follow the governor’s mask mandate is now suing the State of South Carolina.

7 News spoke with the owner about the lawsuit.

“The first weekend was our busiest weekend ever after you and I did this interview,” Neil Rodgers said to 7 News reporter Scottie Kay on Tuesday. “I sold almost 800 hamburgers that Friday.”

Neil Rodgers is the owner of Ike’s Korner Grille in Spartanburg – a restaurant that’s refusing to obey the governor’s order that all employees and customers must wear a mask inside, unless they are actively eating.

His customers don’t seem to mind. In fact, Rodgers told 7 News he’s had many people coming in from out of town just to participate.

“A big group came from Asheville, older people who came down to support us,” he said. “They loved that we weren’t wearing a mask and that we weren’t letting the government control our lives.”

But the fines for not following the executive order are starting to rack up for Rodgers.

“Spartanburg County has already given me one ticket. SLED has come four times,” he said. “I’ve got a $100 fine and a $500 fine. The Department of Revenue said, the next time they come, it’ll be $1,000 more; and, then, they’ll come and suspend my beer license for 45 days if I continue to do this.”

Rodgers said that’s why he decided to file a lawsuit and a motion for an injunction against the State and Governor Henry McMaster.

“Somebody had to put their foot down, and I wish it wouldn’t have been me, but I did,” he said. 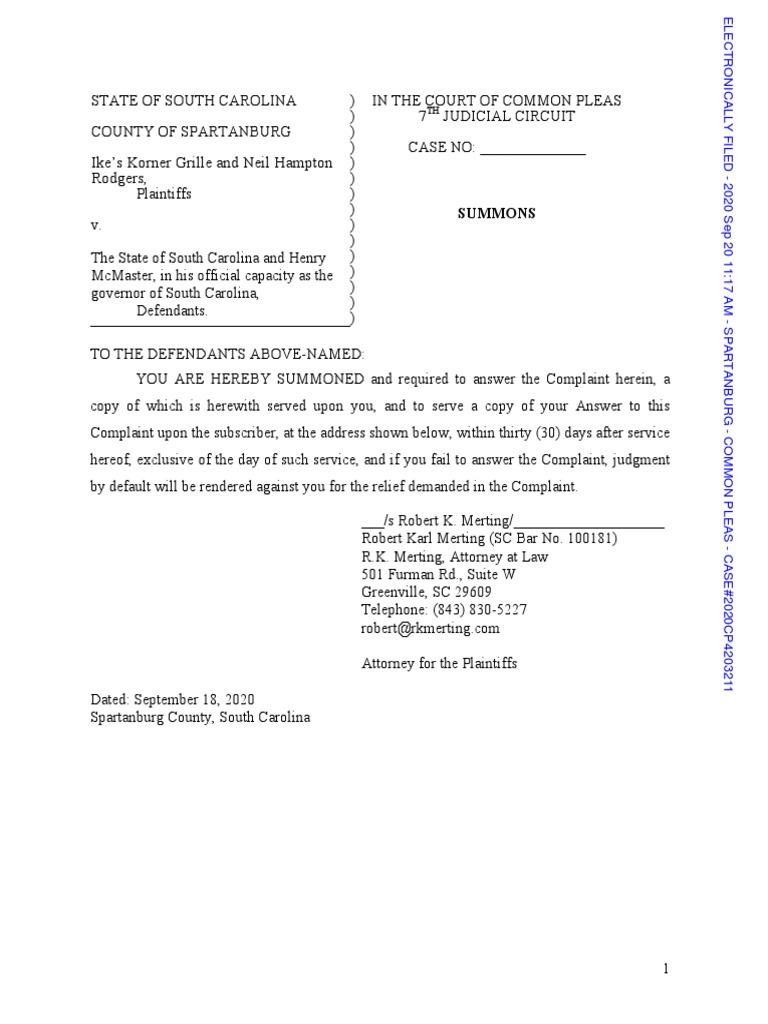 Rodgers told 7 News he’s hoping this move will keep the fees from piling up and, more importantly, he said, he hopes it will stop the executive order from being enforced.

“To get rid of all this and everybody can get back to normal, because that’s what we all want,” Rodgers said. “I feel like it’s unconstitutional for the government to tell you what you can do. I mean, we live in America. We’re still Americans. It’s just getting ridiculous.”

7 News reached out to the governor’s office for a statement on the lawsuit. The communications director there sent us the following statement:

“As a former U.S. Attorney and Attorney General who has practiced law for over forty years, the governor is confident in the constitutionality of the targeted, deliberate and limited measures that have been put in place to help stop the spread of the virus.”

An organization has offered to raise money for Rodgers in order to help pay his legal fees.

Rodgers told 7 News his attorney is representing another business in the Upstate with the same beliefs and goals.