The state has seen the lowest number of cases in over three months in recent days. 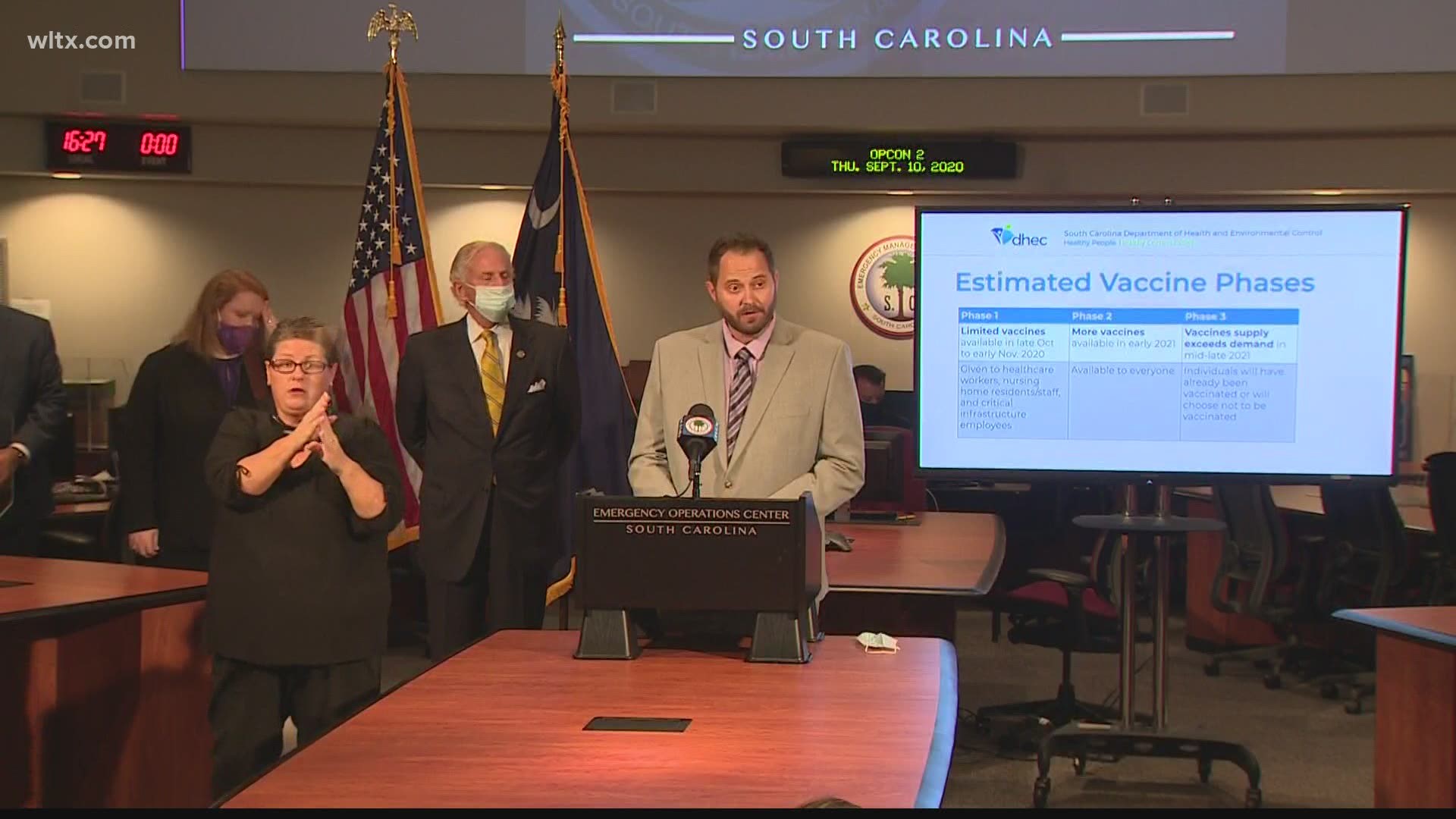 COLUMBIA, S.C. — South Carolina Gov. Henry McMaster and state health officials are saying they'll be ready to distribute a coronavirus vaccine as soon as it's ready and are working on the plan to get the medicine out.

McMaster gave an update on the state's fight against COVID-19 at a briefing at the state's emergency operations Thursday afternoon. McMaster used the briefing to primarily address two topics: his suggestions for the use of additional coronavirus relief funding, and what will happen will a coronavirus vaccine is ready. He also discussed his ongoing frustration that all school systems have not given an option for reopening to in-person classes.

DHEC leaders said they have heard the reports that a vaccine might be ready by the fall. At this point, three vaccines are in trial in the United States, including some trials that are taking place in South Carolina.

"No vaccine will be released until it has undergone the rigorous scientific and clinical testing  that all vaccines in development are held to," said. Stephen White, DHEC's Director of Immunizations.

They said when the vaccine first becomes available in South Carolina and other states, the number of doses will be limited and those limited doses will be allocated, according to federal guidance, to those at highest risk for contracting the virus and those at the highest risk of death. This includes front-line medical personnel, including those who work  at nursing homes; residents of nursing homes; and critical infrastructure employees as defined by the CDC.

People who get it will need two dose series to provide protection. The time between those doses is not known, but it usually is at least 3 to 4 weeks or longer for vaccines like this. People will need to get the same brand vaccine both times.

McMaster has issued a list of recommendations to the legislature about further coronavirus relief fund spending.

The governor’s recommendations include $450 million to replenish the Unemployment Trust Fund, $45 million in grants for small businesses and non-profit organizations that did not receive federal Paycheck Protection Program (PPP) loans, and $93 million to reimburse DHEC and MUSC for their continued COVID-19 efforts.

The $30 million grants for small businesses would be up to $5,000, and would be for businesses that did not get funds from the paycheck protection program.

In mentioning the money for public schools to cover costs of reopening, McMaster again stressed that he wants them to have an in-person option five days a week. It said so far, only 19 districts do.

The reimbursement money he discussed would only go to schools that have opened in-person.

He said he does not have the legal authority to open all schools, but if he did, he would. "Parents are not happy, I am not happy, I don't know anyone who is happy about this," McMaster said.

He said his office has been flooded with calls and complaints.

Before McMaster's breifing, news broke that Ohio's governor had hired the state public health director. Dr. Joan Duwve, to take over the same job up there.

Duwve had been serving as the South Carolina Director of Public Health for just five months, after coming to the state in late April. She'd been one of the state's key experts and communicators on the coronavirus, testifying to the state legislature and appearing in news conferences alongside Gov. Henry McMaster.

Meanwhile, South Carolina saw a second straight day of coronavirus cases below 300, as as well as the lowest percent positive of cases, since early June, based on the latest numbers from the state's health agency.

The 264 goes along with the 260 cases the day before, and is the first time there have been less than 300 cases on consecutive days since May 31-June 2.

The percent positive reported Thursday was 6 percent. The last time it wast that low was back on June 4.

DHEC acknowledged to News19 Thursday there has been a drop in testing, but said there are as many testing sites open as usual, so that's not due to availability of services.