The governor's order essentially puts in place all the restrictions that most other U.S. states have put in effect. 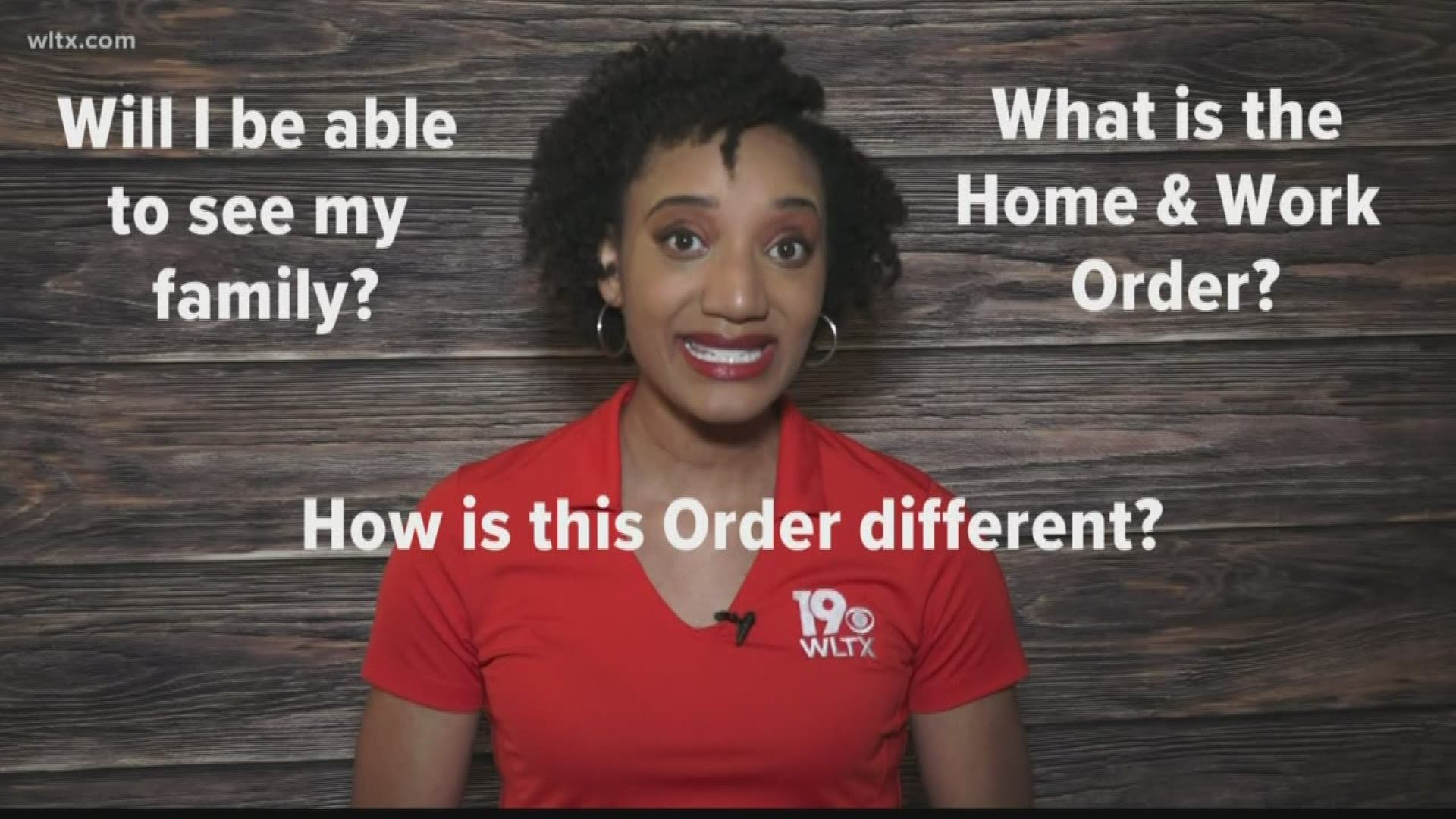 WEST COLUMBIA, S.C. — South Carolina Gov. Henry McMaster has issued a "home or work order," that essentially puts in place the same restrictions as other states' stay at home orders.

McMaster announced his decision Monday afternoon at a news conference at the state’s emergency operations center. It goes into effect at 5 p.m. Tuesday.

"People should stay at home," he said, adding that people could call it a stay at home order, since that's the purpose.

McMaster said he did that because people are not complying enough with previous requests. "We've asked, we've urged, we've suggested, but the last week or so has shown it is not enough," he said.

Here are some of the key provisions of the order, which puts in criminal penalties for non-compliance:

Why now? McMaster explained it this way. 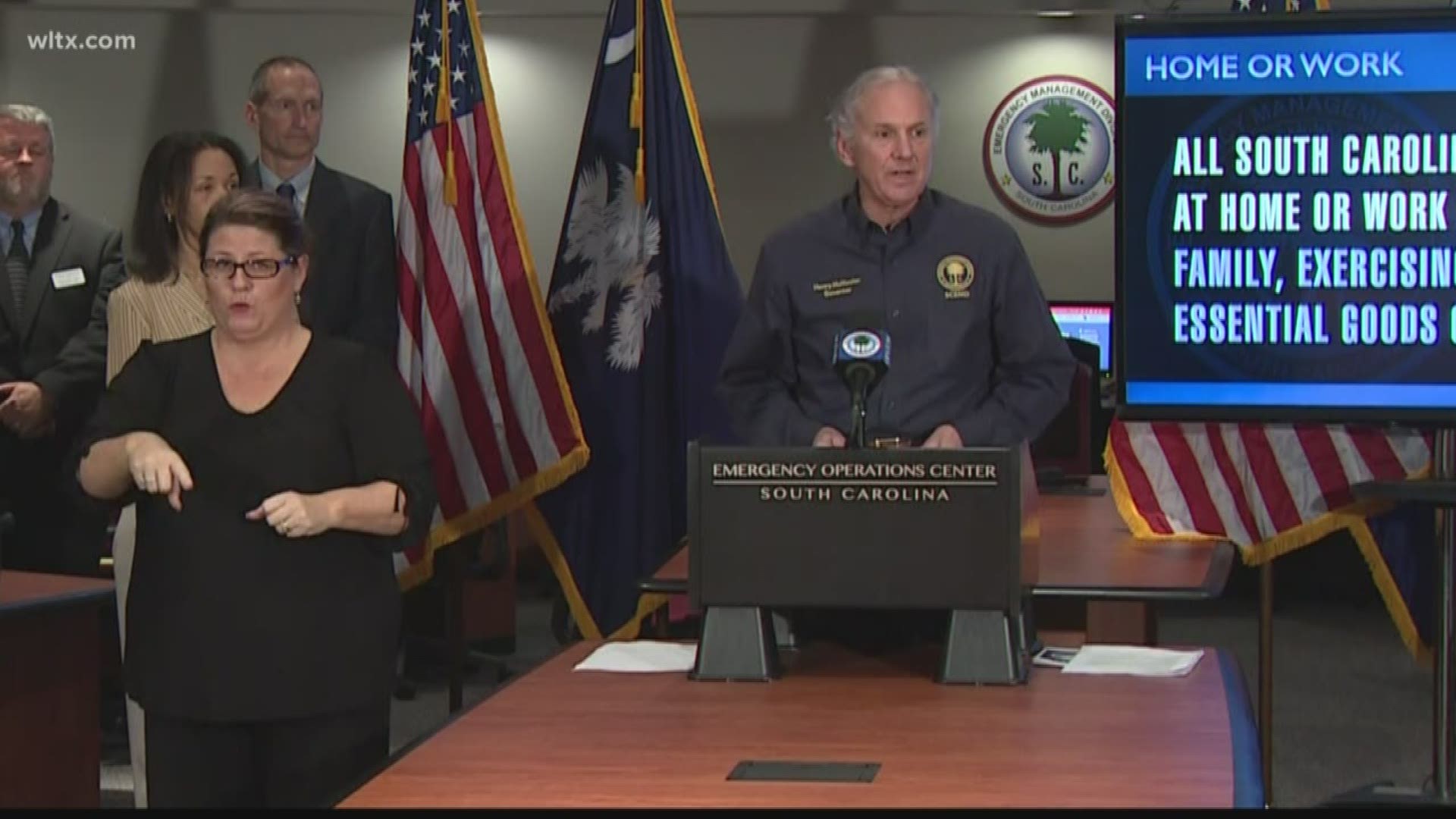 "It is time according to the science, the data, and the facts," he said. "Too many people are on the roads, the water, in the stores, and are not going along with our requests."

He said in some cases, there were actual areas that saw an increase in road traffic.

McMaster and Dr. Linda Bell, the state's infectious disease expert, said they are expecting a surge in cases over the next few weeks.

The order is an expansion of actions McMaster previously has taken, including closing non-essential businesses, closing public beaches and boat landings.

Last Friday, he also stopped rentals at hotels and similar facilities for people coming into the state from coronavirus "hotspots." That excluded medical, military, shipping, and first responders.

He also closed public beaches and public boat ramps statewide, and told police they can break up groups of more than three people who are getting together. He also ordered all restaurants to go to drive thru and takeout only, and told most state workers to work from home. He requested that most businesses move to telecommuting.

But McMaster had so far resisted issuing a stay-at-home order as many other states have.  Multiple politicians, including mayors and state legislators, had asked McMaster to reconsider his stance.

McMaster said 200,000 people have applied for unemployment insurance, but he said that's just the tip of the iceberg.

There were 183 new COVID-19 cases announced Monday. That brings the number of cases statewide to 2,232

There were 4 new deaths, bringing that total to 48.

Richland County leads the state with 311 confirmed cases and 7 deaths. Kershaw County is second with 152 positive cases, with Lexington in third with 124 cases.

What should churches do?

Governor McMaster says he is urging churches to follow social distancing guidelines or stream services online, but says he will not order them not to gather, saying he does not want to impede on the First Amendment.

What is the Coronavirus?

Coronaviruses are a large family of viruses that cause respiratory infections ranging from the common cold to more serious diseases such as pneumonia. The version that's caused the pandemic, referred to as COVID-19, is a new strain of the virus.

People can help to prevent the spread of the virus in the following ways:

For general questions about COVID-19 residents should visit the DHEC website at scdhec.gov/COVID19 or the CDC website here.

For residents concerned about their own personal health or are showing symptoms such as fever, cough or shortness of breath, please call your personal doctor or healthcare provider. DHEC has launched its Care Line. If residents have general questions about COVID-19, the DHEC Care Line is here to help. Call 1-855-472-3432. Staff are answering calls from 8 a.m. to 6 p.m. Call volume has been high. Callers are urged to be patient if they receive a busy signal and try their call at a later time.