With the number of COVID-19 cases rising in South Carolina, leaders in the Democratic party are asking for a special emergency session to allow masks in schools 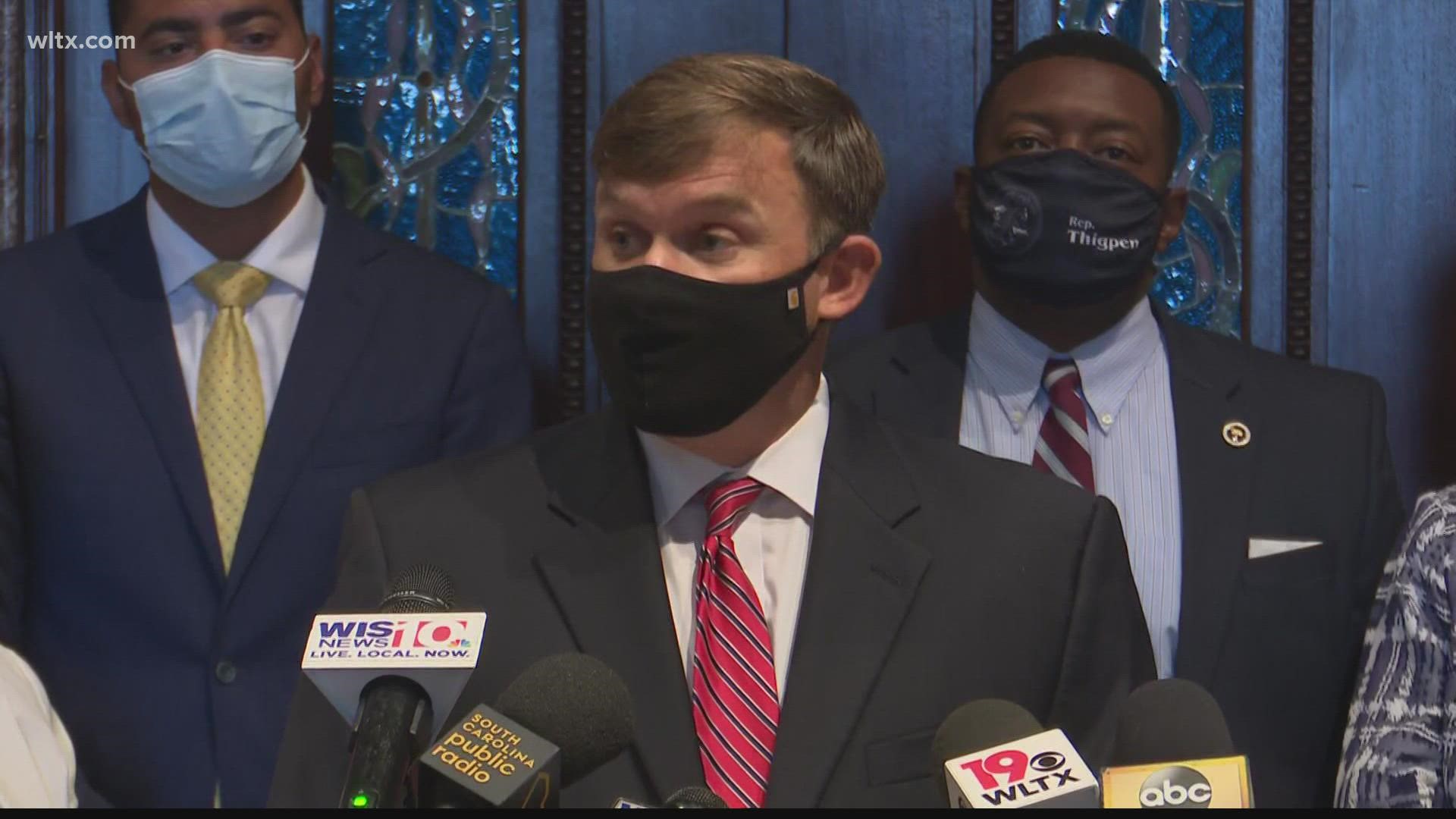 COLUMBIA, S.C. — Some South Carolina Democrats are calling for an emergency special session of the legislature to allow school districts to put in place mask mandates for students and staff.

Rep. Russell Ott, the Assistant Minority Leader for the SC House Democratic Caucus, was flanked by fellow Democrats in the House and Senate where he asked Senate President Harvey Peeler and House Speaker Jay Lucas to bring back the General Assembly. He said it's to address the ambiguous language in the mask proviso that was passed in June 2021.

Ott said he's like lawmakers to come back and rewrite the proviso to let local leaders on the state's school boards make decisions impacting individual districts.

South Carolina Gov. Henry McMaster has said repeatedly that the proviso bans mask mandates in schools, and believes decision on face coverings should be left to parents, who he said are the "experts" for their child's health.

RELATED: 'Now is the time to get the vaccine,' says SC Gov. McMaster

"This is not about Democrats or Republicans," said Ott. "We are not here to criticize anyone for their vote back in June, when the seven-day average of new cases stood at 150. Today, however, that seven-day average is 3,390 and school officials need to implement measures they feel necessary to keep the children of South Carolina safe."

Ott went on to say the choice of using masks in schools is important because it will keep children in the classroom where they learn best and parents working rather than staying at home helping their children learn in a virtual classroom environment.

"This is not up for debate," he said. "We have seen what happens when unvaccinated and unmasked children are put into a classroom setting together over the last couple of weeks. Schools are either forced to close or move to a virtual setting. Children under 12 cannot be vaccinated now so masks are the only form of protection."

"We have to do what we need to do to protect our children," said Ott. "If wearing masks in the classroom is the tool that can accomplish this goal, then it is incumbent upon us, the General Assembly, to give that tool to our school districts and school leaders."

Representative Patricia Moore Henegan, chair of the SC Black Caucus, echoed Ott's sentiment. She said the state of South Carolina is not doing enough to keep the children, teachers and staff of this state safe.

"We are legislators, not doctors," she said. Citing the release of a petition signed by over 1,000 doctors and pediatricians in South Carolina asking for the use of face masks in schools to help prevent the spread of coronavirus, Henegan said, "when it comes to children's welfare, we must do the right thing. Getting children back in the classroom should never be based on politics, instead, our politics should be based on public health.

Cheryl Harris, representing the SC Caucus of Black School Board Members, said school districts have a lot on their plate -- and the focus needs to be on the child and the classroom not on a proviso.

"With the numbers as high as they are right now, school districts have got to be able to make decisions whether to mandate masks, whether its going to be e-learning or whatever, to help preserve the classroom to bring the Covid numbers down," said Harris.

"My oath is to protect the children of South Carolina," she said.

Harris sits on the Richland One School Board and said, "right now with the numbers trending the way they are, Richland One would be virtual and not in classrooms with a mask mandate.

"Our goal is to get the kids in the classrooms. Our goal is to preserve the classroom because we realize that if children are not allowed to come back to school, face-to-face or mask-to-mask, it's going to lead to children being at home -- which will lead to parents being home and that's going to impact and affect our economy. That is what we are trying to avoid."

Harris said masks are not perfect but they do help to stop the spread of the virus. And that's the goal.