South Carolina has received 8,611 vaccines per 100,000 people. The state also has the third-lowest rates of vaccines administered. 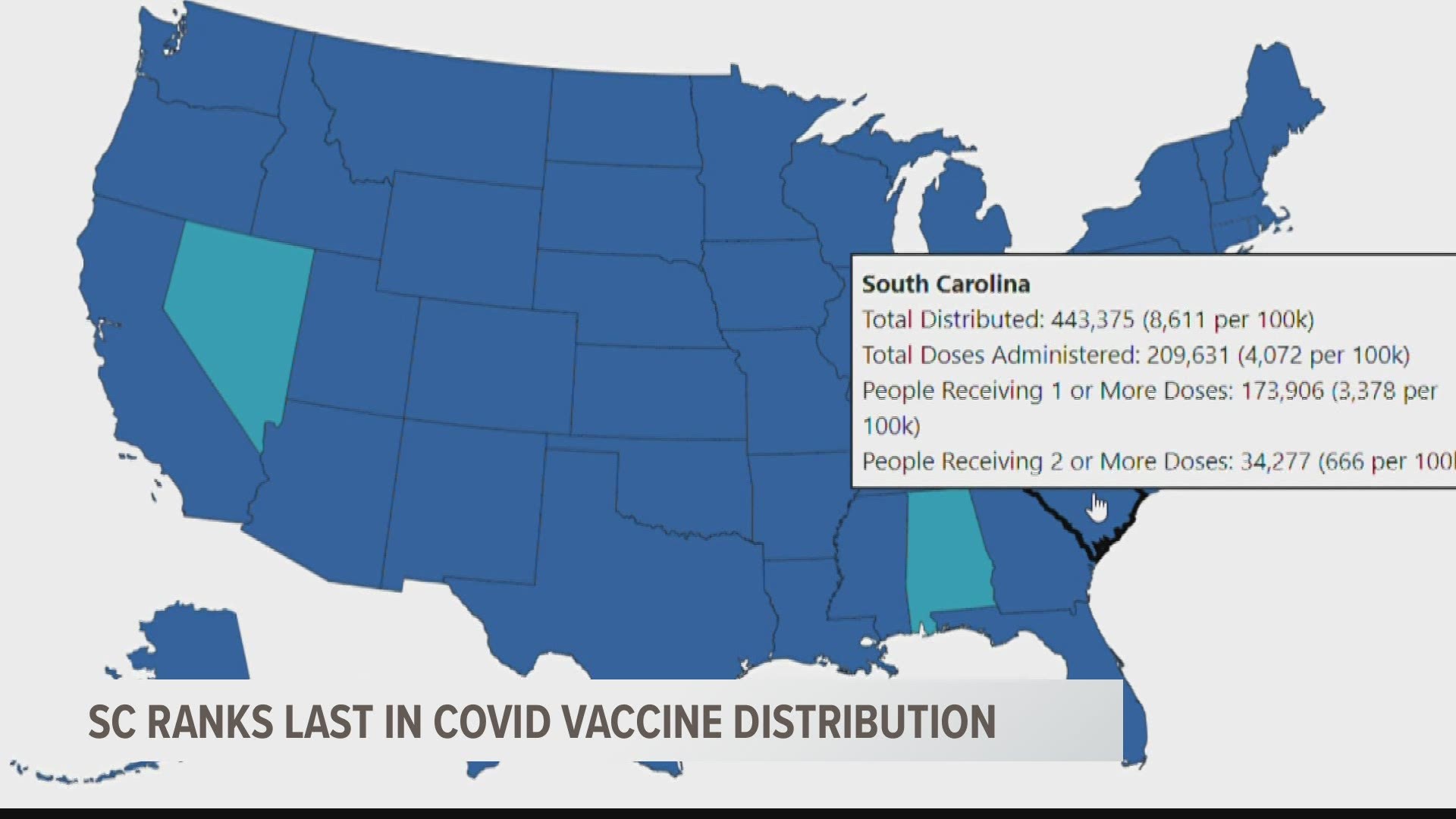 SOUTH CAROLINA, USA — You may have seen reports out there that South Carolina is one of the worst states in the nation in giving out the COVID-19 vaccine.

But is that true?

News 19's Vaccine Team looked into how the Palmetto State is getting and administering the vaccine compared to other states.

According to the CDC's website, South Carolina is currently ranked last in the country in terms of COVID-19 vaccinations distributed. That data shows the state has received 8,611 vaccines per 100,000 people.

RELATED: South Carolina ranks last for COVID-19 vaccinations per capita. How they plan to fix it

Neighboring states, including Georgia and North Carolina, are doing better with more than 2,000 vaccines. Meanwhile, Alaska has the highest rate, receiving  21,096 vaccines per 100,000 people.

Data also shows South Carolina has the third-lowest rates of vaccines administered, falling behind Nevada and Alabama. Just over three percent of South Carolinians have received one or more doses, and less than one percent got two doses to protect them fully.

While I’m glad to see there has been great progress, we still have much to accomplish in getting South Carolinians vaccinated and I know we can get it done.

However, part of the explanation may be the time lags between reporting from the CDC and DHEC, said DHEC's interim public health director Brannon Traxler.

"The CDC may get slightly ahead of us, such as in what's been shipped to us, maybe if it hasn't landed, for example, in the state yet," explained Traxler. "Some of it may be, for example, would be if we had doses that were just inputted into the system and we have a more up-to-date administrated number. However, this data can go either way with those calculations."

She also says some definitions between "allocated" and "shipped" could be to blame. But, Traxler said South Carolina is catching up to other states. Still, some state lawmakers say the pace of the vaccines is frustrating.

"It's doubly hurting rural areas like Fairfield County that doesn't have a hospital as a mechanism to get these vaccines out," said Sen. Mike Fanning.

South Carolina is still in what's known as phase 1-A, a limited group of people who can get the vaccine. A chart created by DHEC shows phase 1-B to begin sometime early spring. Health officials are deciding who should be in the phase, which is expected to be for 573,501 people.

"Until the amount of the vaccine ramps up coming into the state significantly, the process is going to be slow," said Taylor.