The complaint alleges the officer placed the child in handcuffs, made the child kneel, and told the child "if you spit on me, I'm going to put a hood on you." 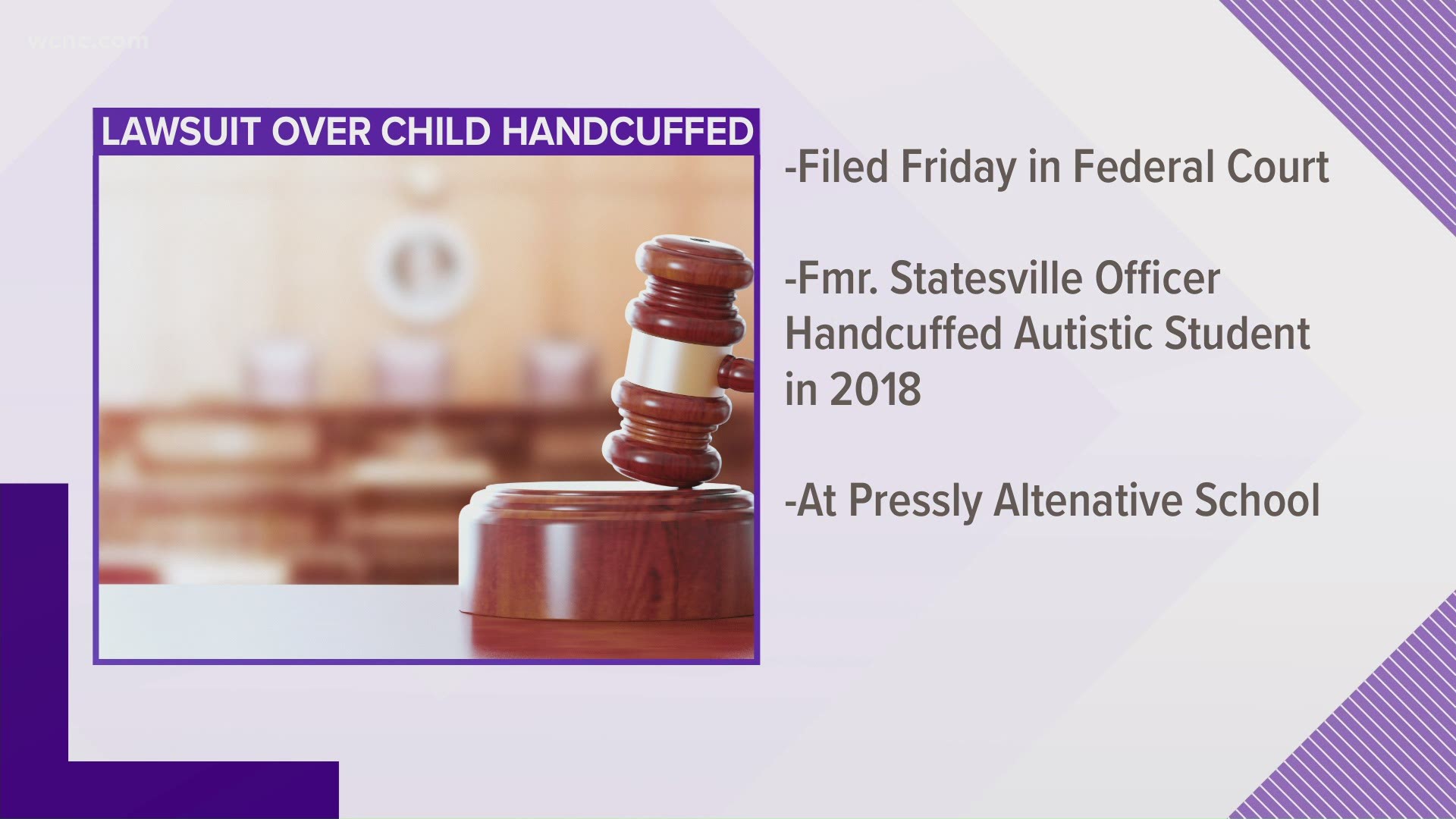 STATESVILLE, N.C. — A lawsuit filed on Friday against the City of Statesville, Michael Fattaleh, and the Iredell-Statesville Board of Education alleges that in 2018, a 7-year-old child with autism was treated with "excessive use of force" by a school resource officer, and was "face down on the ground for almost 40 minutes."

The child's parent said Michael Fattaleh was an officer with the Statesville Police Department and a school resource officer at Pressly Alternative School at the time of the alleged incident.

According to the complaint, the child, referred to as "L.G.," was formally diagnosed with autism spectrum disorder at age 7, a year after being diagnosed with sensory processing disorders. At the time of the events, the child was 4 foot six and weighed 80 pounds.

L.G.'s parent said in the complaint that school board employees and necessary Statesville Police officers were kept updated on the child's diagnoses and mental health updates.

The Statesville Police Department has not made a public comment on this incident since the complaint was filed.

According to the child's parent, L.G. had experienced behavioral issues during his first couple of weeks at Pressly, especially during transitions.

The complaint says on September 10, 2018, the boy had been prescribed a new medication, and several employees within the school system were notified. Then the next day, the boy became "agitated and verbalized being stressed out" after a number of transitions in and out of the classroom.

The child was transitioned to the school's "quiet room" to help him calm down, according to the complaint, and was in the presence of a special education teacher, behavioral specialist, and teaching assistant.

The lawsuit says a member of the staff told a school resource officer that they did not need assistance, but Officer Fattaleh "abruptly entered the room" several minutes later.

The complaint alleges that the officer did not ask any staff for any behavioral or mental health information about the child before entering the quiet room.

The lawsuit in full can be found below:

The officer involved is accused of saying multiple things to the child during the incident, including asking if the child has been charged before or has been introduced to the juvenile justice system. The officer is also accused of placing his knees on the child's back to hold him down.

In addition to accusing the officer of "excessive use of force" in mishandling the situation, the complaint also accuses the education staff of failing to intervene "despite training and knowledge of the immense harm being done to L.G."

According to the lawsuit, the child was not released from handcuffs until the mother arrived. The child did not receive any disciplinary action in response to the incident from his school.

The child's mother took him to the emergency room where she says he was diagnosed with "multiple abrasions, scratches and bruises from the incident" on his arms, back, abdomen, and wrists.

The lawsuit says the child faced extreme anxiety when he tried returning to school, ultimately being sent home early. He has not returned to school since September 12, 2018, according to the lawsuit.

Statesville Police Department has not responded to these allegations publicly.

WCNC Charlotte is working to obtain a video of the incident from the Statesville Courthouse. WCNC will continue to update this story as more information becomes available.