You don’t have to look far to see people still have problems getting unemployment money. The KVUE Defenders looked into why the state still has issues. 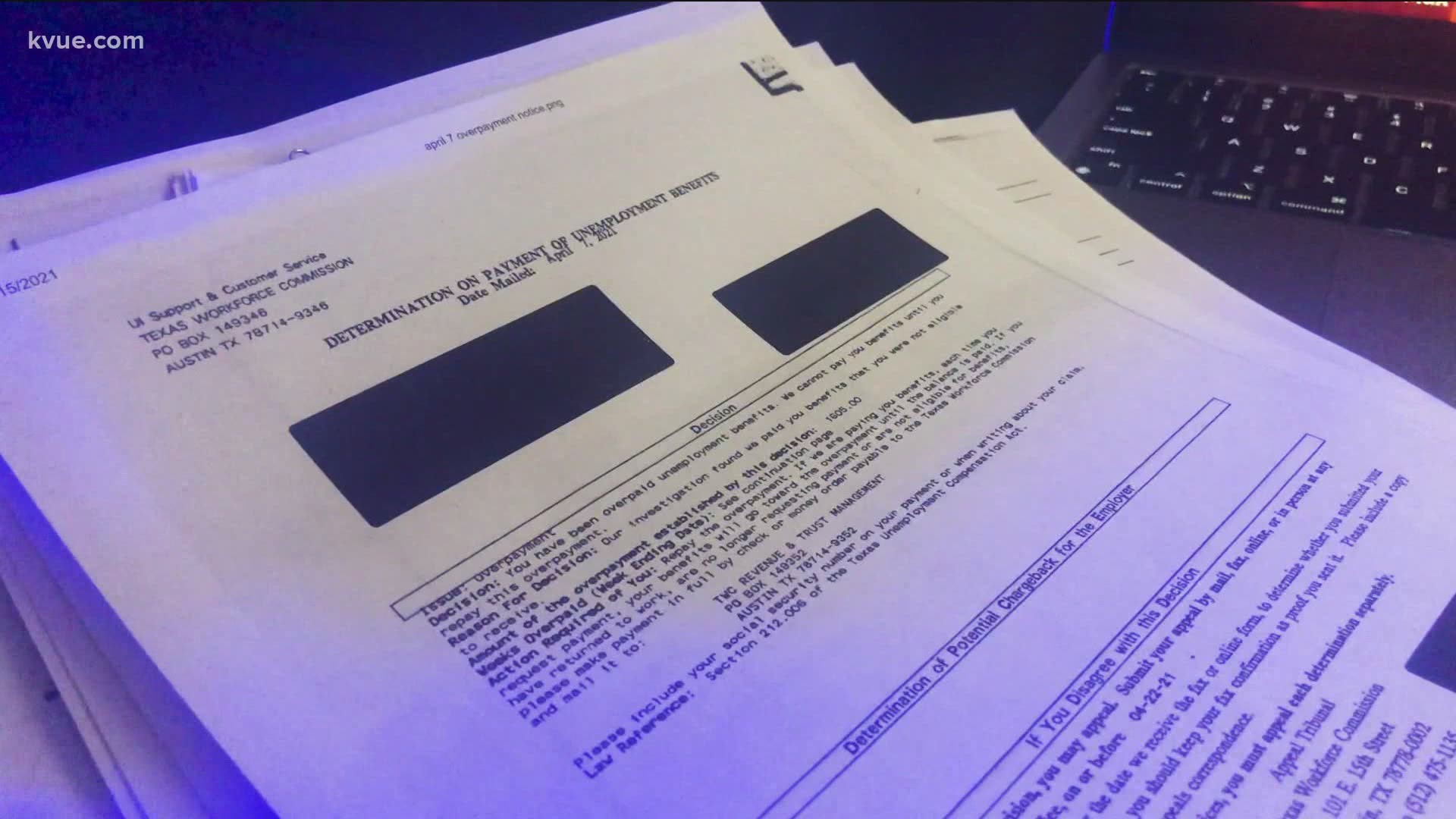 AUSTIN, Texas — “I want it to be over. I've gotten to the point where I just don't know how the people do it. I'm a fairly well-educated individual,” James Brown said.

Brown lost his job in December 2020. He worked as a sales consultant in the banking industry. Brown said he filed for unemployment and received his first couple of checks.

Then, his requests were denied. The Texas Workforce Commission sent Brown an overpayment notice. It demanded Brown to return the money.

“I went into the system and told them, 'I've got this temporary job and, you know, I'm working now.' They wrote me this letter telling me we have discovered that you are working. I'm glad you discovered the information that I sent you, you know?”

He said the money he requested wasn't while he had the new job. At that point, it had been more than a year since the pandemic was declared a national emergency and non-essential businesses closed.

Brown called TWC about the notice. He said the person on the other end of the phone told him to verify his identity through ID.me, a verification company.

“I did that. I got the confirmation email within two hours,” Brown said.

His records showed the verification was sent to the State. Still, no money and he didn’t know why.

“I don't know how people do it. I really believe that a lot of people just give up,” Brown said.

At the beginning of the pandemic, calls flooded TWC’s telecenters and crashed its unemployment website portal.

TWC initially spent $24 million on contracts with four call centers. By summer 2020, those call centers had staff trained only to take claims and reset pins. The contracted workers could not handle complex claims such as fraud or changing federal benefit programs.

We told TWC about Brown and sat down with TWC Executive Director Ed Serna.

Why are Texans still having problems getting unemployment money?

However, Serna said these contract call centers are experiencing issues due to high staff turnover.

"The challenge we're facing now is kind of twofold. One, the questions are more complicated. It's not somebody with just an initial claim," said Serna. “Two, the turnover. Like I mentioned, the contract call centers are higher. So while they have a large number of people to assist, there's a smaller number of people that have the expertise to handle that."

RELATED: US unemployment claims fall to 360,000, a new pandemic low

Serna said that this lack of expertise can lead to frustrated callers who aren't getting the help they need.

"Every now and then we get a contract call center staff person that tries to be helpful and immediately transfer someone over to one of our staff. That's not the protocol. What we've asked him to do is take the information, complete a contact form, get that to us so we can put it in the queue because they're trying to call in on the same line that the other callers are trying to call in. The caller gets frustrated because they're talking to somebody and that person can't help them,” Serna said.

Serna said these call centers are working to be more efficient in contacting those who call in and getting these claims solved. He said for those with more complex issues, more experienced staff members will be delegated to call back and try to resolve the problem.

"I'm very proud of our staff, said Serna. "They hung in there with us. They were working on things way before the governor even declared the disaster. So they've been at it for more than a year now and they've done a great job.”

After our interview, Brown got a call from TWC’s fraud detection division.

“She pulled up my file. She already had my driver’s license, my passport, my utility bill, all of that,” Brown said.

Brown said his claim was originally flagged as fraud, leading to his payments being stalled. He said the problem has now been fixed and he no longer owes money to the Texas Workforce Commission. The TWC is also sending him backpay.

If you have a story you’d like the Defenders to investigate, email us defenders@kvue.com.