11Alive started the research by talking with several parents that made the decision to abandon their child or are struggling with the question. 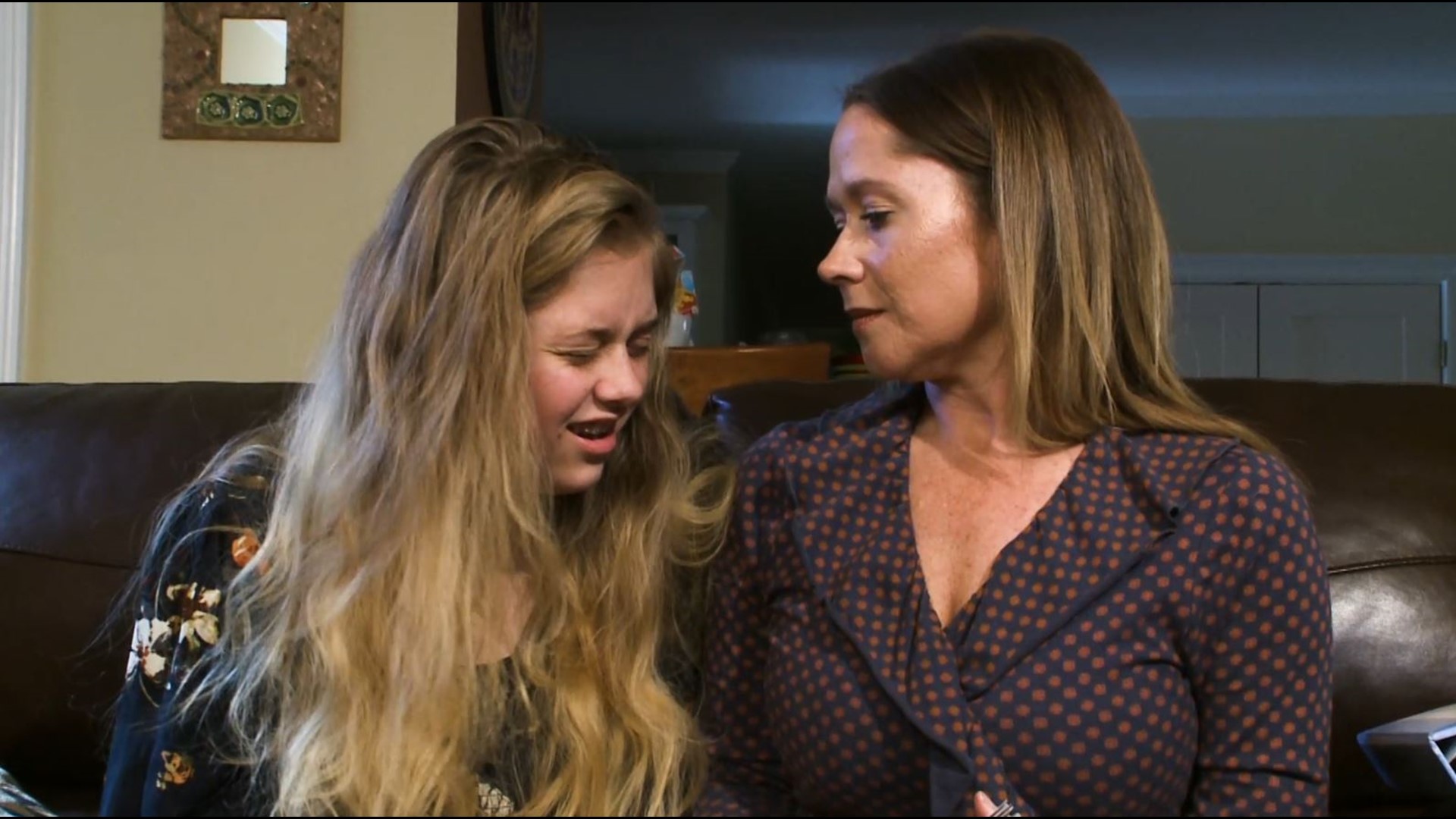 ATLANTA — It was December 2019 when a mother brought her 14-year-old son with Down Syndrome to Grady Memorial Hospital and walked away without any clue what would happen to him next.

Police found her, using the hospital’s surveillance video. When she was arrested for abandoning her child, several other moms came forward to defend her.

“We saw the news and our hearts broke. And we had to come support her,” explained one mom before revealing, “I did the same thing she did some years ago.”

Many in the community were surprised by the confession. That’s when 11Alive's investigative team, The Reveal, decided to do a bit of digging. In the past five years, at least 1,268 children entered state custody, some repeatedly, because the parents couldn’t cope or find help for their kid’s behavior.

Over the next few months, Reveal investigator Rebecca Lindstrom will introduce you to some of those children and the parents who struggle with a complicated system that requires families to "fail their way through" to get the care needed. We’ll examine the gaps that lead to abandonment and what’s needed to keep these children safe at home.

RELATED: 'I was disgusted': Ga. mother shocked when insurance suggested she abandon her son to get him medical care

We started our research by talking with several parents that had made the decision to abandon their child or are struggling with the question at present. That's how we met Kayleigh.

While she was born with multiple mental and physical challenges, her mother said it was the lack of services and patchwork system of care that led her to surrender custody of Kayleigh to the state.

But by the time Georgia's Division of Family and Children Services had responsibility for her care, Kayleigh was a teenager with a long list of diagnoses, run-ins with police, and a history of running away.

The last time she ran away, her mother found her malnourished, covered in bruises, with signs of rape and human trafficking.

Despite the sadness soaked into the lyrics, Kayleigh seemed happy to be lost in the melody. Once she started singing, she seemed almost impossible to stop.

“You’re home with me. Right where you belong,” she sang, moving on to another tune.

“Are you right where you belong Kayleigh?” Lindstrom asked, knowing all she had experienced in her 19 years of life. “Yeah,” she answered quickly, taking a break from her singing to offer a smile on her face as she sat next to her mother.

Her mother would agree. Kayleigh does belong next to her mother, a reality that has come with a heavy price for them both.

RELATED: Here's what happened to teen with special needs who was abandoned at hospital by ‘overwhelmed’ mother

When Kayleigh was born, her mom, Christina Henry, knew early on there were problems.

“She would projectile vomit across the room and just kind of sometimes she would like seize in my arms and kind of her eyes would roll back,” she explained.

Doctors believed the seizures were caused by a Chiari malformation, which essentially meant her brain was too big for her skull. Two surgeries addressed the deformity, but Kayleigh’s developmental delays and behavioral problems continued to get worse.

Early on, the stress and focus on Kayleigh’s needs ended Christina’s marriage. The constant calls to the school and doctor’s appointments ended her career. In 2019, they lost their home. A single mom, Kayleigh, and Christina now live in her parent’s basement.

By the time Kayleigh was a teen, she’d been diagnosed with an intellectual disability, mitochondrial disorder, leaky gut, Oppositional Defiant Disorder, ADHD, and PTSD – just to name a few.

“She can't really count money. She could not tell time on, on a standard clock,” Christina said.

It also means Kayleigh is impulsive, has had fits of aggression, and a habit of running away.

“There was a brief time where it was very, very scary in our house, just, you know, the damage to the home and throwing things,” Christina explained before adding, “My child will get out of a running car, a moving car on I-20 and run across that freeway.”

She said it was after Kayleigh tried to kill herself – overdosing on two medications meant to treat depression – that Christina became desperate. Believing the state could help her daughter access better treatments, she gave up custody.

“Never did I want my child to leave my home. I just wanted help. I just needed that village. And it was awful. It was such a traumatic experience. I just felt like I failed her," Christina explained.

Tom Rawlings, the director of Georgia’s Division of Family and Children Services (DFCS), said when it comes to abandonment, there are really two groups.

First, are the parents who just can’t cope. Last year, that made up about 5 percent of the children that came into DFCS custody, although that number is significantly lower than years previous. These children are usually babies or young children with parents who struggle with severe substance abuse or mental health issues.

Then there are children like Kayleigh who are abandoned or relinquished, often due to the child’s behavior. That’s another 12 percent.

RELATED: She dropped her son off at Grady Hospital and left. Why she isn't protected under the Safe Haven law

That includes children who have been in the system twice, "failed adoptions," meaning children that turned into teens, and with puberty, proved more than the adoptive parents wanted to manage.

"It's generally a process,” Rawlings said. “These children have been through a number of crisis placements, a number of treatments. They want to care for their child, but what if their own child is perhaps a danger to other children in the home?”

As part of a data fellowship with the USC Annenberg Center for Health Journalism, 11Alive assessed data on all of these children. Their ages, diagnosis, and what happened to them after coming into care.

We learned that care is expensive because when the state determines there’s a real need, it’s our tax dollars that pick up what insurance won’t.

“In any given year, our agency spends about $40 million - $50 million dealing with the needs of children with very high mental health or developmental disability services,” Rawlings explained.

Kayleigh, now 19, has returned home. Ironically, her mother has gone to court to win guardianship over her now-adult daughter, to remain an advocate in her medical care.

Kayleigh's struggles remain the same, except now she is at an age where treatment is even harder to get approved. The death of her father has also impacted her health insurance.

“I received a phone call from an older woman who had said, 'you know, we've been keeping Kayleigh here and she's very sick, she's been beaten and raped and we believe she's been in trafficking, you know, can you come get her?'” Christina recalled.

The last time Kayleigh ran away, Christina found her at a motel six off Candler Road, once again vomiting and malnourished. In January, Ricky Bailey was arrested and charged with rape. He pleaded not guilty but a judge ordered him held without bond until trial.

“I never imagined we'd be sitting where we are today and I just don't want my child to die, you know, and it really is that serious," Christina said.

Christina says instead of treatment, her daughter has been given medications. She's filed several appeals with Kayleigh's insurance to try to get more testing in hopes of finally getting a full picture of her developmental, physical, and mental health needs. So far, the response has been no, arguing the tests, nor requested treatments are "medically necessary."

As she debates what to try next, Kayleigh sings. Her song choice is poignant to the moment. A song of heartache and simply heart.

“You’ve got to cry a little, and let your poor heartbreak a little. That’s the story of, that’s glory of love," Kayleigh sang.

NOTE: Discrepancies between the web story and the broadcast story referencing the number of children abandoned between 2016-2020 are due to new data analysis showing duplicate entries for some of the abandonments previously counted.

This story was told as part of a 2020 Data Fellowship with the USC Annenberg Center for Health Journalism.

Covered in feces, man died of dehydration in Georgia jail 'that looks like a friggin horse stall'