A famed hospital, a 7-year-old hospice patient, and the debate that failed to save Olivia Gant 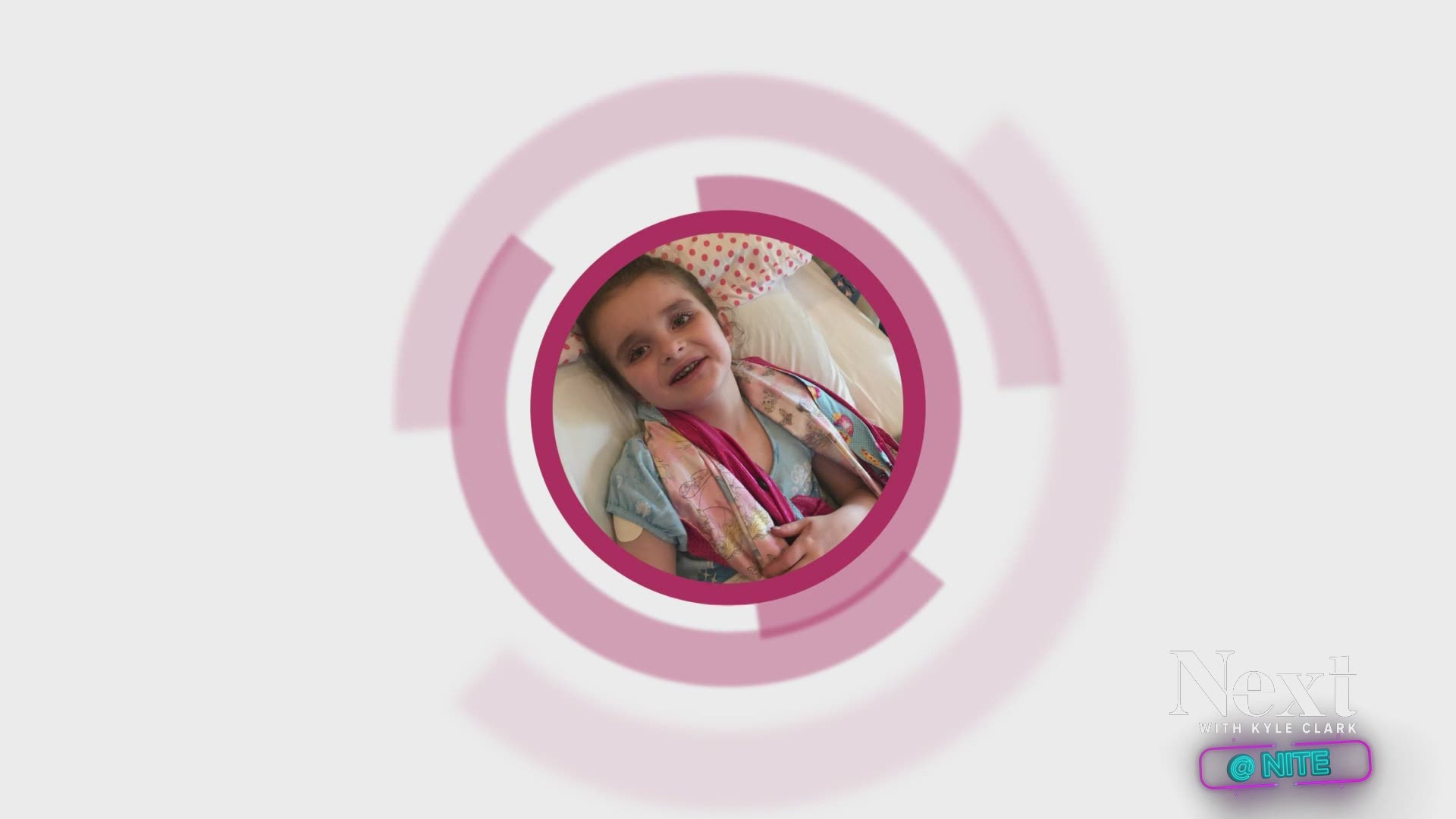 DENVER — In the days leading up to Olivia Gant’s discharge from Children’s Hospital in 2017, members of the 7-year-old’s care team quietly considered the ethics of sending a talkative and buoyant girl to hospice where life-sustaining, artificial nutrition would be discontinued, according to medical records reviewed by 9Wants to Know.

The day Gant boarded a transport bus bound for Denver Hospice, hospital employees shared an additional concern: Was mom playing a potentially deceitful role in Gant’s long history of care at one of the most respected hospitals in the nation?

Gant got on the bus anyway. Nineteen days later, she passed away.

Years later, the suspicions of at least some of the hospital staff proved prescient when a grand jury decided to charge Kelly Turner, Olivia’s mother, with —  among other things —  first-degree murder.

RELATED: Mother accused of murder in death of her 'Make-A-Wish' daughter pleads not guilty, headed for trial

The 2019 indictment mentioned the possibility of Munchausen syndrome by proxy, a rare psychological condition where parents make up or cause an illness or injury of their own child.

Turner has plead not guilty to the charges.

Olivia Gant’s step-grandfather, Lonnie Gautreau, said he believes the hospital must share at least some of the blame.

“The signs were there to protect [Olivia’s] life,” he said. “We trusted the hospital and the doctors to take care of that child…. They put a child in hospice to starve to death.

"That baby starved to death.”

A spokesperson for the hospital told 9Wants to Know, in part: “This is an incredibly complicated case.”

Acknowledging the ongoing criminal case as well as federal HIPAA law, the spokesperson added, “We simply cannot comment on or share details related to Olivia’s care.”

Kelly Turner moved her children to Colorado in 2012, in part, to be closer to the state’s world-renowned Children’s Hospital.

What started in 2012 with a series of relatively simple visits for feeding problems morphed into, in 2014, a series of aggressive procedures that involved doctors placing a series of tubes and other devices into Gant’s body to help it purge waste and receive enough nourishment to live.

In November 2014, for example, doctors performed an ileostomy weeks before adding a PICC line to help administer TPN or total parenteral nutrition. TPN is administered intravenously.

Around that time, Turner started telling family members that Gant’s situation was dire.

“Kelly told us [Olivia] only had about two years,” Gautreau said.

That’s when he and his wife decided to move to Colorado themselves to be closer to Olivia.

In 2015 and 2016, Children’s Hospital featured Olivia Gant in a series of promotional and fundraising videos. Her giggle was infectious. Her spirit was indomitable. In 2016, a cake she baked with a former Miss Colorado netted $750 for the hospital’s foundation. A video shown to donors featured the two encouraging people to bid.

In early 2017, Kelly Turner began focusing on a series of “bucket list” items for her daughter Olivia.  One day she helped Denver Police arrest a “bad guy.” The next, she helped South Metro put out a “fire.”

“She’s in intestinal failure. We don’t know how much longer she has to live,” Kelly Turner told a 9NEWS photojournalist in March 2017.

Later that year, doctors admitted Olivia Gant on July 11. What followed is documented, often in great detail, in the medical records obtained by 9Wants to Know.

Those records highlight an internal debate that took place inside the hospital’s four walls.

Not even Lonnie Gautreau knew about the discussions.

“No, not at all. There was no clue,” Gautreau said.

"I really wish they had put in a pause"

Doctors at Children’s Hospital admitted Olivia Gant for what would be the final time July 11, 2017.  She was three weeks past her seventh birthday.

The following day, medical records indicate Kelly Turner “would like to allow Olivia to die naturally.”

“[Mom] says she is not afraid of Olivia’s death because of her Christian faith,” reads a July 12, 2017 report.

Turner wanted doctors to continue the DNAR – or do not actively resuscitate order –, but there was a problem: One of the lead doctors in Olivia Gant’s care refused to sign his name to it.

He issued what the report called a “conscientious objection” to it.

At the time, the 7-year-old was taking a large number of painkillers putting “Olivia at risk of hypoventilation.” The first of three ethics consultations took place with the hospital’s ethics team. Meeting notes indicate “individual team members… had personal/moral objections to the DNAR.”

No immediate decision was made – the DNAR remained in place -- although the team said, “it is impossible to predict the timing and ultimate course of [Olivia’s] disease.”

A July 26, 2017 report indicated: “At this time, Kelly is intending to pursue discontinuation of artificial nutrition [TPN].”

There was another ethics consultation meeting the next day.

“The primary value conflict in Olivia’s care is over how to best assess Olivia’s quality of life and who is in the best decision to do so," a report read.

Over the course of the next several days, nurses made several notes regarding Olivia’s demeanor.

July 28: “Olivia is sitting up in bed playing her video games.”

“This is not someone who is in tremendous distress,” said University of Chicago pediatric medical ethicist Dr. K. Sarah Hoehn. She reviewed the ethics consultation notes for 9Wants to Know.

That same day, the final ethics consultation took place inside Children’s Hospital. For the first time in more than 13,000 pages of medical records, there’s discussion among team members of the possibility of medical child abuse.

Hoehn describes medical child abuse as a parent or caregiver “essentially making up symptoms and making up things that are wrong with [the child] to get more attention for them or the child.”

The initial opinion in the Aug. 1, 2017 ethics report concluded, “Olivia’s case is not typical of medical child abuse and that nothing currently rises to the level that would require a DHS [Department of Human Services] report, though they acknowledge that other team members may have different views and interpretations of the facts.”

That disagreement should have caused the team to “pause,” according to Hoehn.

“If you are concerned about medical child abuse, it has to be reported outside of those four walls to someone who can validate the information,” she said.

Instead, Olivia’s primary gastrointestinal (GI) doctor concluded, according to the medical records, he was “comfortable discharging Olivia to hospice” where “TPN would be discontinued.”

That day, Olivia boarded the transport bus bound for Denver Hospice. A video of her shows her singing “Hakuna Matata” along the route.

A hospice nurse noted, “[Olivia] is unaware that stopping nutrition will assuredly cause her demise.”

"This is an incredibly complicated case"

“I think there’s a potential for a conflict of interest," she said. "When you have someone, who has literally been the poster child for that hospital for a long time and now saying, ‘Gosh, we’re not sure if we’re missing something.'"

A spokesperson for Children’s Hospital declined our request for an on-camera interview. The ongoing criminal case and the specter of a civil suit against the hospital have, indeed, made it challenging for the hospital to publicly try to defend itself in this case.

It did issue the following statement to 9Wants to Know:

“This is an incredibly complicated case, and unfortunately federal HIPAA laws and an ongoing criminal trial involving Olivia’s mother mean that we simply cannot comment on or share details related to Olivia’s care or this case. If we could, we are confident that the community would recognize and appreciate the deep sense of commitment and professionalism Children’s Hospital Colorado staff and University of Colorado physicians bring to all of our patients.”

With regard to the fundraising efforts that relied on Olivia Gant, the spokesperson said, “Many patients and families who come to our hospital participate in the numerous events that take place at our various locations. As a nonprofit, research hospital, we also rely on fundraising to help achieve our mission. Many patient families ask to help participate in marketing and fundraising initiatives as a way to express their appreciation for the care we provide. We are grateful for that and accommodate opportunities whenever we can.”

Contact 9NEWS investigative reporter Chris Vanderveen with tips or more information you might have about this story by emailing chris.vanderveen@9news.com.