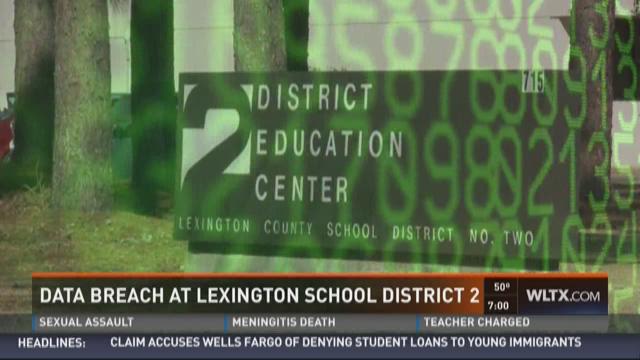 Lexington County, SC (WLTX) - About 1,300 current and former employees were affected by the data breach at Lexington School District Two according to the South Carolina Department of Consumer Affairs.

"It's an imposter scam. Someone from outside who is trying to make it look like they're from within the organization, requesting that sensitive data," Carri Lybarker said.

Lybarker is the administrator for the department, and said she was notified about the social engineered data breach within the district.

"Social engineering is just when someone spoofs an email or that imposter scam when they're utilizing technology to perpetuate their scam," she said.

And it's not uncommon for breaches like this to happen.

"What we have seen in the past, when we've seen similar information be released is that there is an email that poses as someone that would be in the organization, so in this case potentially within the school district requesting that personal information," she said.

On Friday, school officials said this scam affects anyone who received a paycheck from the district in 2016 and it led to the release of W-2 information which includes names, addresses, social security numbers and salary data.

The district declined to comment Monday, but their attorney said this incident does involve email.

As a preventative measure the district is offering credit monitoring for the next 12 months.

"Identity theft monitoring companies will look at black market sites, so they'll look for your social security number, your personal information to see if it's being sold or attempted to be sold and they'll also look at other databases again to see if your information is being entered or transferred again to verify with you whether or not it is you who is trying to engage in that transaction," Lybarker said.

Because fighting identity theft is a constant battle and requires diligence.

"You really are the number one defense you have in your information being stolen even if you go with a credit monitoring service it does not take you out of the equation because they don't know whether or not you are the one who's applied for that product or service or gotten that loan out, so you have a duty to try and protect yourself," she said.

So far the district said that there is no evidence that the information was misused.

For more information on how you can protect yourself click here.