The child’s parents had previously ordered a venom extraction kit from Amazon, which allowed them to extract the venom three minutes after the snake bite. 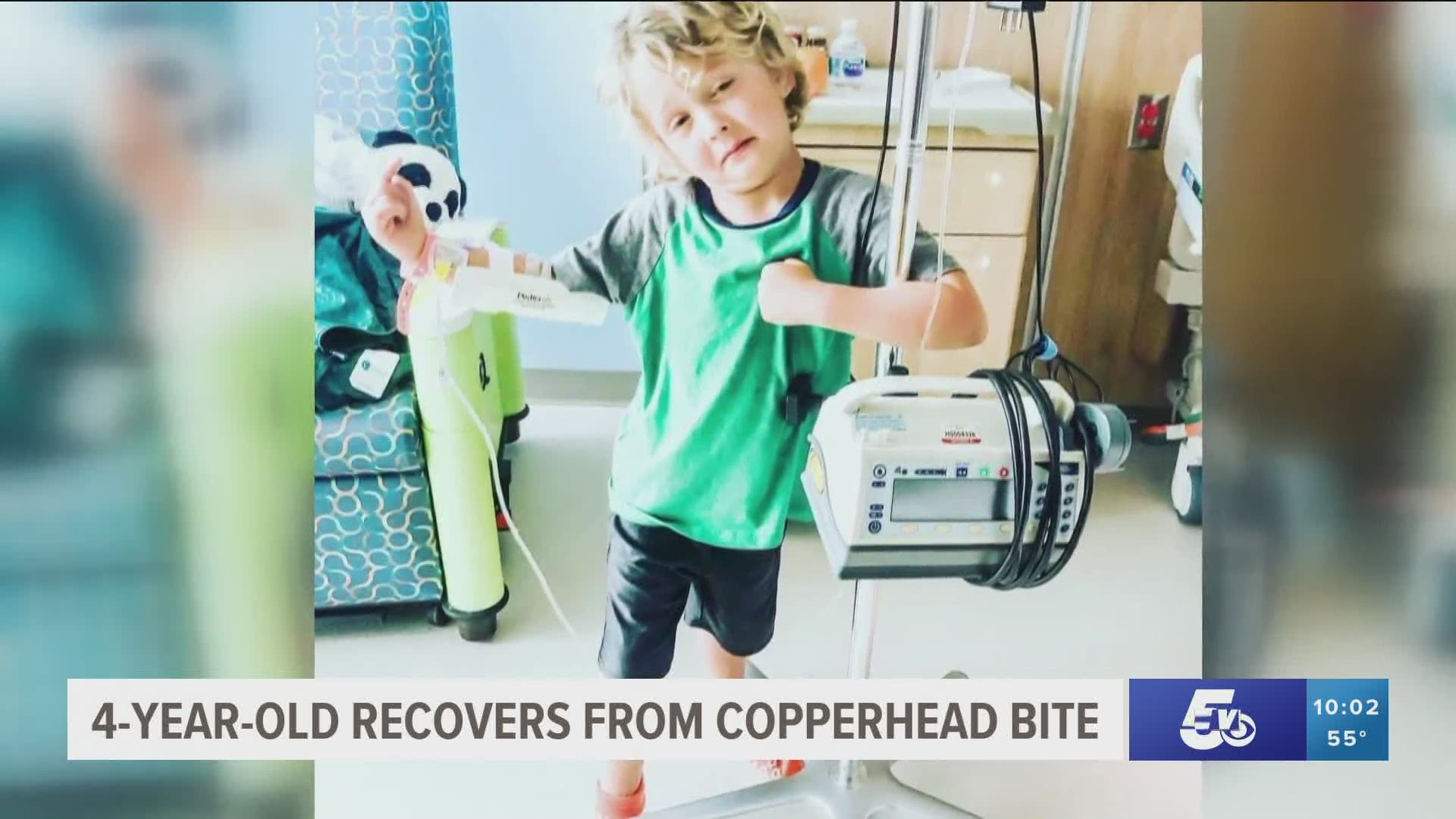 GREENWOOD, Ark. — 4-year-old Rhye Henderson Lowers was bitten by a copperhead snake on his family's farm east of Greenwood around 7:25 p.m. Sunday (May 3).

Rhye's parents, Courtney and Colby Lowers, had bought a venom extraction kit after moving to their Greenwood farm.

They say they had used it for wasp stings but never imagined having to use it for a snake bite on their 4-year-old son.

"I have been reliving the events in my head, and in such a horrific event, everything couldn't have gone more smoothly," said Rhyes' mother, Courtney Lowers.

Courtney began the extraction at 7:28 p.m., just three minutes after the bite occurred.

Courtney said she extracted venom for five minutes before fresh blood came, per the instructions, and then ten more minutes after just to be safe.

Posted by Courtney Fredricks Lowers on Sunday, May 3, 2020

At 8:29 p.m., the helicopter began the flight to take Rhye to the Arkansas Children's Hospital NW.

"Colby shot the snake after miraculously finding it, we called 911, the ambulance came and shortly after the helicopter. Yes, a helicopter landed in our front yard! It's not how I had planned my Sunday night nor how I imagined spending one on one time with our boys," said Courtney.

'Archer Medtech Ven-Ex Venom Extractor' is the kit that Rhye's parents used to extract venom from their son and can be found on Amazon.

Courtney said, "I highly recommend it, but hopefully just for a simple wasp sting. The doctors said we reacted perfectly, and because of our actions and the extraction of the venom, he will be just fine."

On the way home from the hospital, Rhye told his parents, "I'm staying inside all day tomorrow."

His mother reports that he was back outside within 30 minutes of waking up the next day.

Courtney said she is thankful for all of the first responders who came and for Children's NW Medical and their staff.

She gave a special thanks to the flight nurse, Kara, "She kept me informed and commented on our sweet boy and his gorgeous hair!"⠀

Rhye's brother, Hayze Lowers, was with him at the time of the bite.

Courtney said, "Rhye is already back to fighting with his brother and being the rotten little boy he was made to be! Thank you all for your love and prayers!"

When asked how he felt about the snake bite incident a few days later, he simply had this to say, "It was not the best day ever!"

Rhye's father, Colby Lowers, kept the snake after killing it, knowing his son would want this opportunity to pose with the snake he conquered.

Congratulations to Rhye and his family for handling this situation so well and for their happy ending!