36-year-old Diana Willmeth was reported missing after she didn't show up to her family's 2005 Mother's Day celebration. 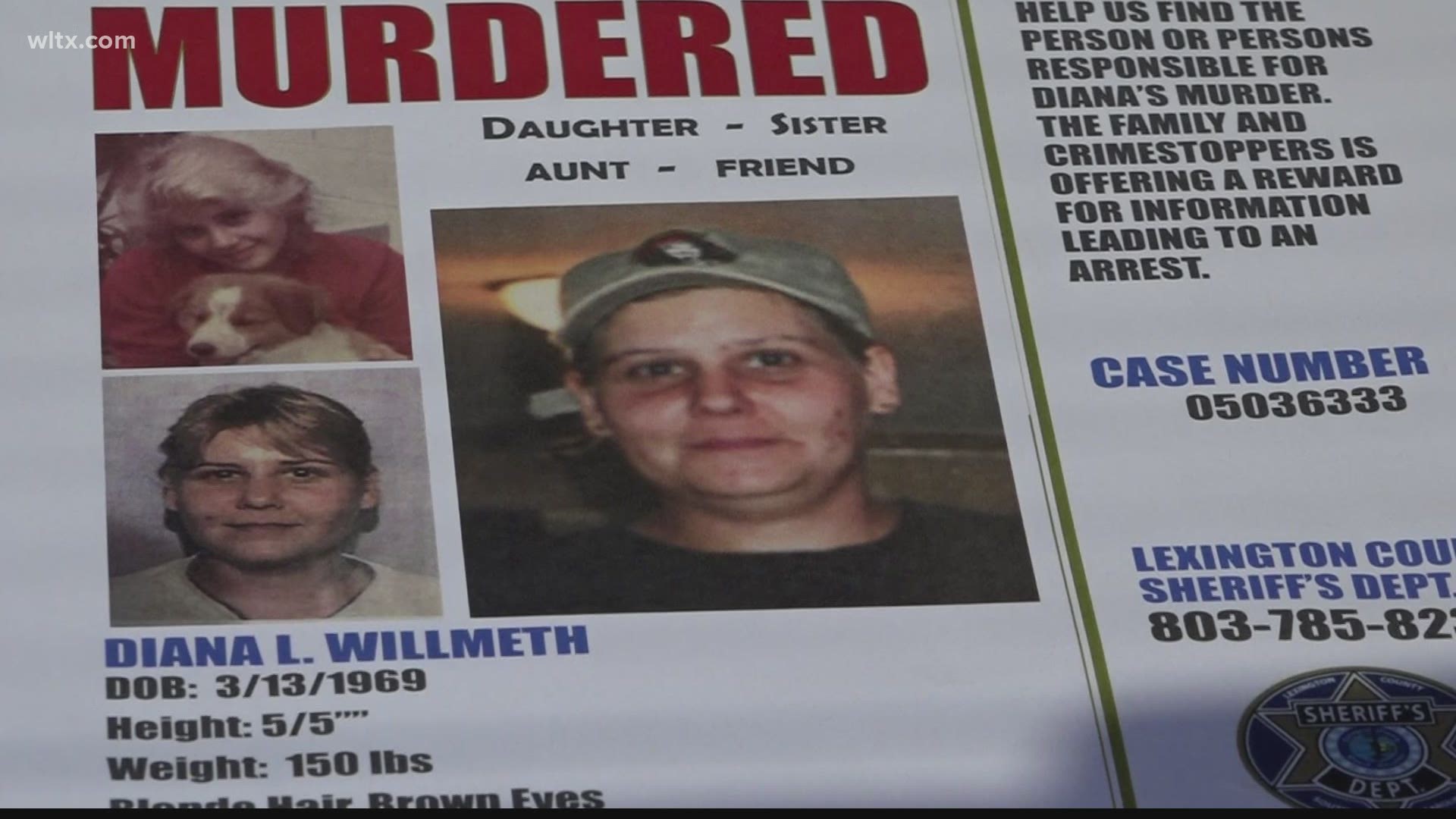 LEXINGTON, S.C. — Investigators say she was found murdered in a wooded area in Lexington County two months after she went missing in 2005.

For 16 years, the family of 36-year-old Diana Willmeth has waited for a breakthrough in her case.

To this day, her killer remains unidentified.

Her parents haven't lost hope that someone will come forward holding the missing piece that will solve the puzzle of their daughter's murder.

Their youngest, Diana, remains at the center of a cold case in Lexington County.

"We have some information that leads us to believe that Diana very likely had some familiarity with whoever did this to her," said Captain Adam Myrick, Public Information Officer for the Lexington County Sheriff's Department.

On May 6th 2005, Diana was last seen at Lucky's Bar off Edmund Highway.

"She went for an interview at a bar as a waitress and a bartender," said Marion. "She went there quite often."

The next morning, on Mother's Day, she planned to join family for a lunch at her parent's house.

"She didn't show up, she didn't answer the phone so we went out there," said Gerda. "That's when everything started."

When family arrived at Diana's home off Forest Drive in Gaston, they say her car was still there along with personal belongings.

"Her purse, telephone. The TV was on," said Marion. "That just isn't my daughter."

"She never would have left her animals without food and water," explained Gerda.

A missing persons report was filed.

Searches lasted several weeks, but there was still no sign of Diana until July 7 that same year.

"Diana's body was found in a wooded area on Jacques Haven Road," said Myrick. "It was found by local teenagers who were playing with paintballs."

The wooded area where Diana was found is about two and a half miles from her home.

Investigators say she was beaten and shot.

"So that's where things have been now for more than 15 years," said Myrick. "We've had substantial leads. We've talked to persons of interest, but we simply have not had probable cause to make an arrest on anyone."

Investigators and family members agree there's a possibility someone at Lucky's bar that night could have a piece of critical information that can help solve this case.

"Somebody in that bar there that night probably knows who she left with or if someone followed her home," said Marion. "Somebody knows and all they have to do is call."

Year-round, the Willmeths reminds the Lexington County community about their daughter's case by posting her flyer on their car.

They're also sending a message to other families in hopes these words could save a life:

"If they have loved ones and they're going somewhere, ask them - I know it might be annoying - to text or call when they make it to their destination and have a tentative idea of what the directions are," said Gerda. "So if something goes wrong, they know where to look."

If you have any information that can help solve this case, call Crime Stoppers at 1-888-CRIME-SC.