Her forgiveness inspired a movement: Alana Simmons-Grant showed that #HateWontWin

Alana Simmons-Grant's faith helped her get through one of the darkest moments in her life and shine a light on the evils of racism and the power of forgiveness. 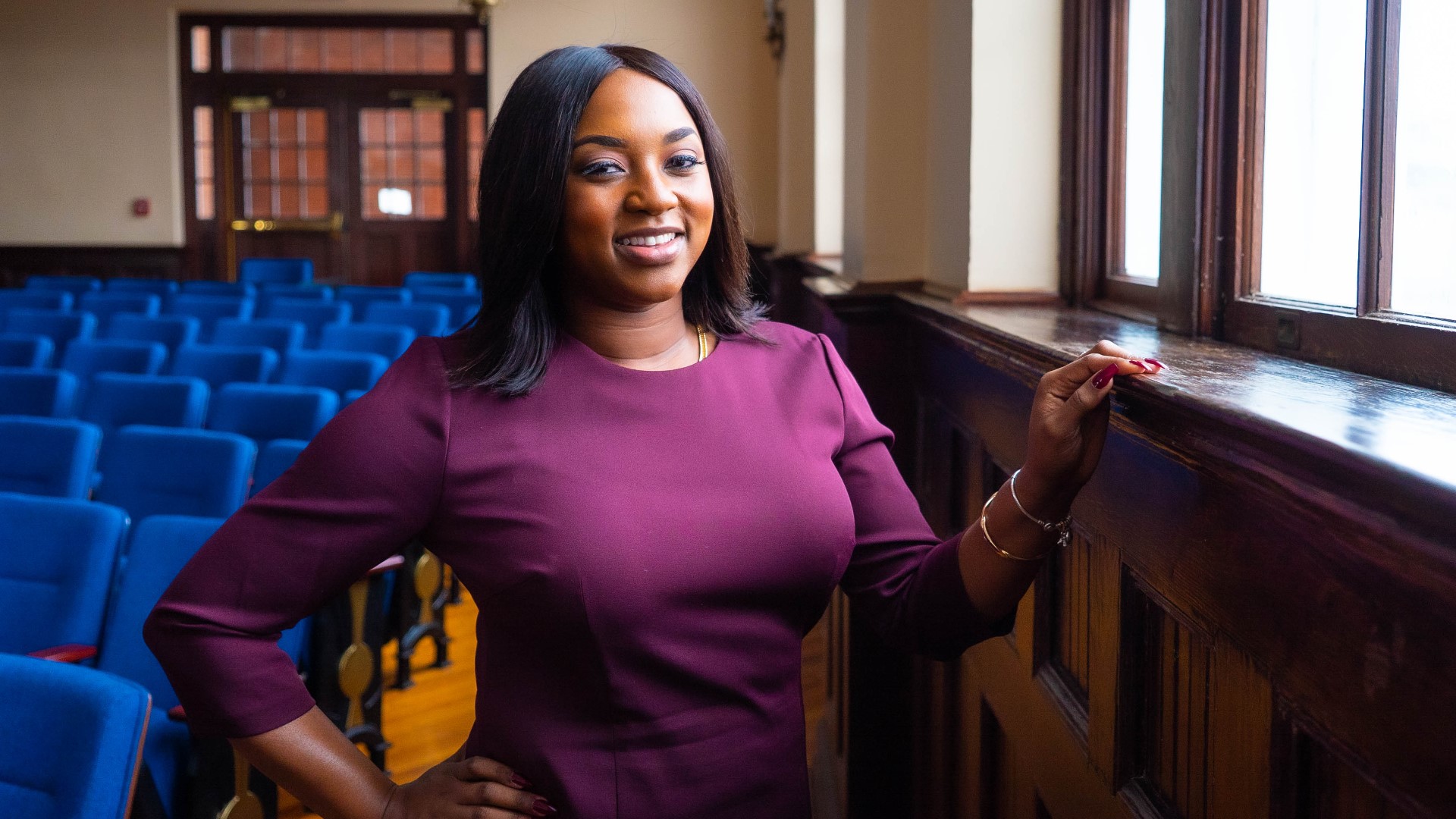 SOUTH CAROLINA, USA — On a summer evening in 2015, a man walked into a Charleston church. He sat through a weekly meeting, then opened fire on the members, killing nine. Alana Simmons-Grant wasn't at the church that night, but her life was forever changed.

She remembers the exact moment that changed the course of her life. It was June 17, 2015.

"I remember getting a call from my father saying that there had been a shooting in Charleston," Simmons-Grant said.

At the time, she was living in Virginia, working as a grade school teacher.

A white man entered the church shortly before the meeting started that night, and sat in with the group. When the meeting was over, he stood up and opened fire on those sitting around him.

Simmons-Grant's grandfather was one of those in attendance.

"God, please let my granddaddy be the one that's injured."

After Simmons-Grant received the phone call about the shooting, she turned on the news. Headlines reading "Charleston Church Massacre" and images of victims being wheeled into ambulances filled her night.

"One of the things I remember praying was that my grandfather was the injured one," she said. "How crazy is that, to even consider, you know, pray like 'God, please let my granddaddy be the one that's injured and not one of the eight that was murdered.' "

Her grandfather, Rev. Daniel Lee Simmons Sr., was injured during the shooting. The morning following the massacre, the coroner called the family and said that Reverend Simmons had been injured, but died after suffering several gunshot wounds.

Nine people were murdered in the shooting.

Simmons-Grant is a wife, mother, realtor, community-advocate, and board member. She has a lot of titles, but considers none greater than follower of Christ. According to her, her faith in God helped her get through one of the darkest moments of her life and shine a light on the evils of racism and the power of forgiveness.

She recounts the period surrounding the massacre as a very dark time. While grieving the loss of her grandfather, and being thrust into the national spotlight, she said they were "also introduced on a really rough introduction to the judicial system."

At the time, there were many questions about federal and state charges for the gunman and white supremacist, Dylann Roof.

South Carolina is one of only three states in the nation that does not protect its citizens against hate crimes. While South Carolina can still charge someone for a crime committed because of hate, it cannot add enhanced penalties.

Simmons-Grant had been a teacher in Virginia when the massacre happened. Because of the lengthy judicial process, she stayed in South Carolina for the trials and to support her family.

"I just want to thank the courts for making sure that hate doesn't win."

On June 19, 2015, the victims' families were allowed to address Roof directly during his bond hearing.

Initially, Simmons-Grant said her family did not plan to say anything. That changed when Nadine Collier, daughter of Ethel Lance, offered Roof forgiveness.

RELATED: Family of Victims to Shooting Suspect: 'I Forgive You'

She said Collier was in such physical pain after losing her mother that family members had to help her walk to the podium.

Simmons-Grant said that Collier's act of forgiveness humbled her.

Inspired by what she witnessed, Simmons-Grant chose to extend forgiveness to Roof, as well.

When it was her family's turn to speak, she said God put these words on her heart: "Although my grandfather and the other victims died at the hands of hate, this is proof, everyone's plea for your soul is proof that they lived in love, and their legacies will live in love. So, hate won't win. And, I just want to thank the courts for making sure that hate doesn't win."

When asked about choosing to forgive Roof, Simmons-Grant said, "Everything that we do, we do out of either love or fear."

She went on to explain, "For me, the choice to, to forgive was motivated out of the fear of descending into what he was, and then out of the love of Christ...I have to make the choice that I'm not going to turn into this. I'm not going to let what he did determine how I operate. I don't want to give anybody that kind of power over me."

After news of what happened at the bond hearing reached the general public, the hashtag "HateWontWin" exploded on social media.

Simmons-Grant decided to capitalize on the hashtag, and added a call to action. She challenged people to show an act of love to someone different from them.

"The purpose of that was to shed some positivity on my timeline. All I kept seeing were the, you know, mug shots of Dylann Roof, and it literally sickened me," Simmons-Grant said. "So, I wanted to see something different."

Credit: Alana Simmons-Grant
After the bond hearing, Alana says the hashtag "HateWontWin" as well as this picture of a black and white hand forming a heart was all over her timeline.

After Senator Clementa Pinckney's funeral, the Obamas asked if there was anything they could do for victims' families. Simmons-Grant talked with the couple about the "Hate Won't Win" movement.

A few hours later, President Obama, in office at the time, tweeted, "So inspired by the grace shown by the Simmons family and all the victims' families in Charleston. #HateWontWin."

The hashtag took off after the Obamas tweeted their support for the movement.

So inspired by the grace shown by the Simmons family and all the victims' families in Charleston. #HateWontWin pic.twitter.com/jMS0SDUYui

According to the website, the organization's purpose is to "create a more culturally cohesive society that appreciates and celebrates differences instead of allowing them to divide us."

"Being on a collective page of racism is bad."

The Charleston church massacre prompted tough conversations across the country about race relations, equity, equality, and social justice in America.

"Before 2015, you didn't hear about hate crimes or racism in the context that you hear about it now; it was a very antiquated subject," Alana said. "We talked about it in February because February was Black History Month. And now it's more of an ongoing conversation."

Over the last six years, Simmons-Grant has dedicated her talents to cultivating conversations about race and social justice. Between TV interviews, panels, and keynote speeches, she has taken every opportunity to speak out against the evils of racism and promote unity across the country.

Part of that means directly addressing how America can most effectively tackle this issue. According to Simmons-Grant, the first step is, "being on a collective page of racism is bad."

She also believes education plays a significant role in moving our country forward, further reiterating that some students learn about prejudice and racism as issues of the past.

"My grandmother had to take a literacy test to vote, and she is still alive and kicking," Simmons-Grant said. "This is not that far or that long ago. And so, if she had to take a literacy test to vote, then people administering the literary test for her to vote are also still alive. So we have to think about it in the sense of, 'Okay, this is not history.' This is something that is very real to people that we come in contact with every day."

She says one of the things that helps her reconcile with the massacre is that more people are having open conversations about race relations and are receptive to these conversations.

"I value good-natured people, regardless of their position."

Reverend Simmons' legacy and love continue to guide Alana through every season of her life. She keeps his bible, which he wrote all his sermons in, to center her and her young family.

She said,  "I wouldn't have my son if I didn't meet my husband. So it's almost like the silver lining, I guess in the tragedy for me personally."

Between juggling her roles as wife and mother, Simmons-Grant works for the South Carolina Commission for Minority Affairs and as a realtor for Excel Real Estate.

"I have the opportunity to help people build wealth, and most of my buyers and sellers have been first-time homebuyers."

Simmons-Grant takes pride in working for a black-owned brokerage because she did not see a lot of that growing up.