The Deep Dive team has been sifting through the work orders and has showcased what the year looked like for some at Allen Benedict Court. 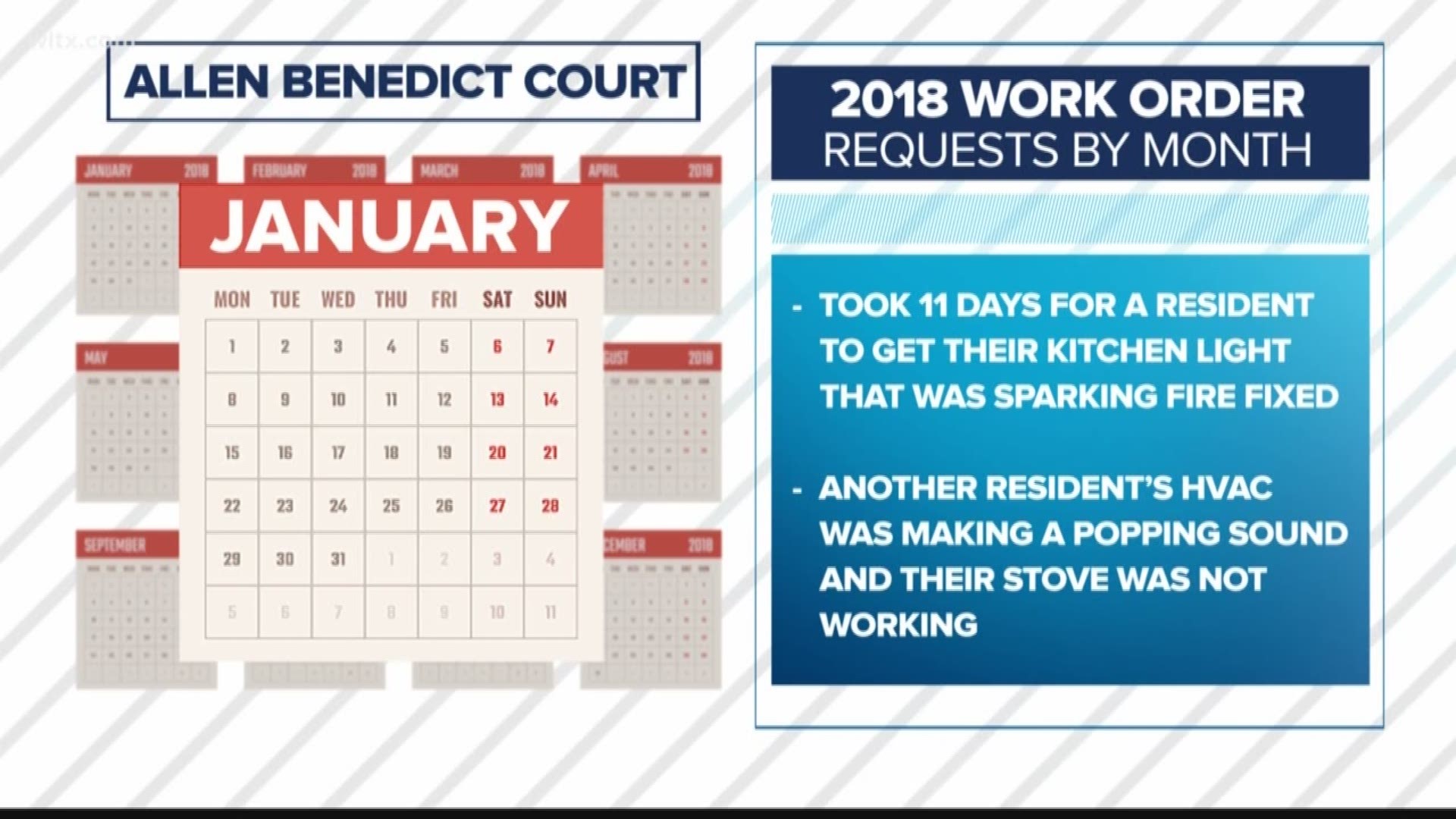 COLUMBIA, S.C. — (WLTX) -- News19's Deep Dive team has been going through the work orders we were able to get our hands on from the Allen Benedict Court office. Previously we shared some of most shocking work orders from residents in units A to Z, like appliances sparking fire to rats coming into units.

Now, we are taking a look at just a few work orders to give a better perspective of what problems Columbia housing Authority residents faced within the last year. We are going to break down one or two work order request from each month in 2018.

We start in January. It took eleven days for a resident to get their kitchen light that was sparking fire fixed. Another resident reported their HVAC was making a popping sound and their stove was not working.

In February, a resident asked for their stove to be replaced twice before maintenance came in to do any repairs. Plus multiple residents called in work orders for no heat.

Also in March a resident reported their HVAC was making a loud sound and said fire was coming from it. That same resident also reported they had busted pipes underneath the sink and it took more than a week for it to be fixed.

On April 25th a tenant said their heater caught on fire and it wasn't fixed until May 10th, 15 days later.

In may Calvin Witherspoon, one of the men who died from carbon monoxide poisoning, reported not having hot water. Another tenant put in two request asking for assistance installing their A/C window unit before getting help.

In June a resident put a work order on the 8th for no hot water, cracks in the ceiling and the tiles in the whole apartment needing to be replaced. It took more than a month before repairs were completed. And on June 29th a tenant had to call the fire department because they smelled gas. The fireman said it was coming from the oven. There are also multiple reports of hot water constantly running and plumbing problems.

In July tenants complained about not having hot water and multiple plumbing issues.

On August 8th a work order was put in to have a back door replaced due to a previous fire and the door was kicked in. It was not fixed until September 10th, more than month later. On the 9th, a resident put in a work order to have their unit checked for a gas leak and noted their oven was not working.

On September 5th a gas leak at the meter was reported by a resident. On September 29th a resident needed their bathtub repaired because dirty water was coming into the tub.

On October 15th a resident had water coming through the wall when it rained. On the 29th a resident put in a request because their front living room wall was was falling apart  and said rats were coming in through the hole. that same resident also had a leak over their kitchen stove and asked to have their unit checked for mold and mildew.

Also in October a wall was splitting in a residents unit and was not fixed for more than a week.

On November 5th a tenant waited more than month to have maintenance come back to fix a cabinet they took apart, their tub was leaking water downstairs and the ceiling needed repairs.

Finally in December, a resident said their heater was spitting out fire and on December 27th a resident reported they smelled gas.

Again, these are just a fraction of the hundreds of work orders request we have by residents in 2018.