The 244 units at Allen Benedict Court opened for residents back in 1940.

The complex has sat empty since January 2019 after more than 400 residents were forced to evacuate their homes due to a gas leak that also took the lives of two men, Calvin Witherspoon Jr. and Derrick Roper.

As the housing authority recently put the demolition contract out for bid, they also are hoping to get former residents to share their memories from the past 80 years.

"It has such rich history," Columbia Housing Authority Interim Executive Director Ivory Mathews said. "It is super important for us to capture that history." 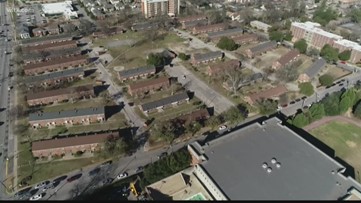 Columbia Housing Authority Interim Executive Director Ivory Mathews said as they prepare to demolish the 80-year-old property of Allen Benedict court, they also want to take a moment to remember all of the past families who once lived there.

The 244 units at Allen Benedict Court opened for residents back in 1940.

"During that time you didn't have a lot of units that had running water or pluming so when the development of Allen Benedict Court came along that was the first time a lot of families had solid housing to live in," Mathews said. "And so, we hope that through this public engagement to families who lived there could be monumental to capturing all the rich history."

The project is called Allen Benedict Court: Always in My Heart.

Columbia Housing Authority Spokesperson Cynthia Hardy said they currently have a lot of artifacts including the original program from the grand opening back in 1940, but they hope to gain a more personal touch from past residents.

"What we wanted to do was have something that would last, so as they give us that information what we want to do is post it to our website and include it in a table top publication," Hardy said.

Mathews said they hope to have the demolition contract awarded by the end of May, which is nearly a year-and-a-half since the complex was shut down.

In January 2019 two men, Calvin Witherspoon Jr. and Derrick Roper were found dead inside their units at the complex. Both men died from carbon monoxide poisoning. 411 residents were also forced to evacuate the property on a moments notice. The complex has remained empty since that day.

Mathews said their timeline has the demolition to hopefully be completed by the end of this summer and the goal is to have a final development plan by January 2021.

Mathews said at this time they are unaware of any pending legal litigation that would have an effect on their ability to proceed with the demolition and redevelopment of Allen Benedict Court.