Located on Interstate 35 between Austin and Round Rock, the massive sculpture features three potatoes reclining on an equally large sofa. 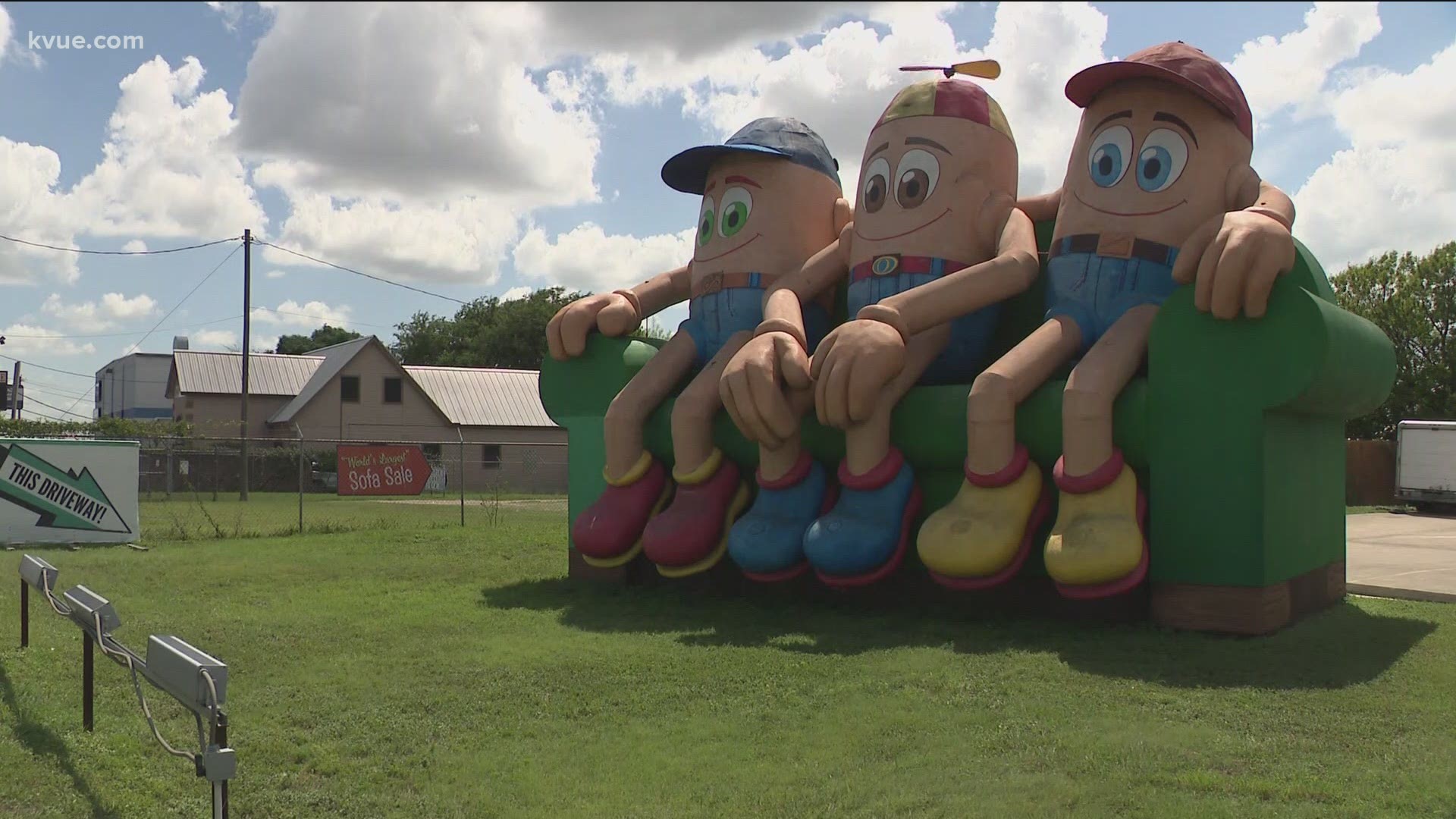 AUSTIN, Texas — Austin Couch Potatoes is looking for a new home for its 22-foot-tall landmark.

Located on Interstate 35 between Austin and Round Rock, the massive sculpture featuring three potatoes reclining on an equally large sofa has been a fixture in front of co-owner Brian Morgan's furniture store, Austin Couch Potatoes, for almost a decade.

According to the Austin American-Statesman, Morgan's furniture store recently lost its lease due to the booming Austin real estate market and he is now looking for a new home for the potatoes.

Ten years ago, when Morgan and his other co-owners, Travis Morgan and Dan Anthony, first moved into their I-35 store, they were looking for a way to draw in customers to their less-than-ideal store location. According to Morgan, this location was difficult to access due to how hard it was to exit the highway in the right place.

“We took a building with probably the worst highway access imaginable,” said Morgan.

According to the Statesman, this is where a local artist and a friend of Morgan, Andy Davis, offered to build a giant sofa for the furniture store to display on the side of the road. The massive sculpture would tell people exactly where the furniture store was. The design was later modified to include three giant potato figures to sit atop the couch.

Artists Faith Schexnayder and Ryan Day worked with Davis on the project, and Jerry Fryer led construction. Six months later, the giant sofa and its occupants were installed in front of Austin's Couch Potatoes in six modular parts, Morgan said. Morgan estimates now that the whole thing costs around $70,000.

Morgan said this sculpture put Austin's Couch Potatoes on the map. Kids would beg their parents to pull into the parking lot and people would come from far and wide to see it, according to the Statesman.

Austin's Couch Potatoes has two other locations, one on Ben White Boulevard and one on North Lamar Boulevard, where Morgan would love to move the statue if it was possible, but he doesn’t think the city would go for it.

“I would do whatever impacts the most people,” he said. “That’s been the benefit of even having this thing, is bringing people smiles.”

According to the Statesman, Morgan would love to find an accessible, local home in Austin for the potatoes.

“If it was something that was part of Austin, I would gift it,” he said.

As far as moving the structure goes, the owners said they'll figure it out when they get there. Morgan said a fundraiser might be involved.

Interested parties who have ideas about what to do with Austin's Couch Potatoes' sofa-and-spuds installation, including artists and potential buyers, can email bigmove@austincouches.com.

What could trigger stricter COVID-19 guidelines in Central Texas?