Ludacris, Flo Rida and the Ying Yang Twins will join Nelly for inaugural concert at the park 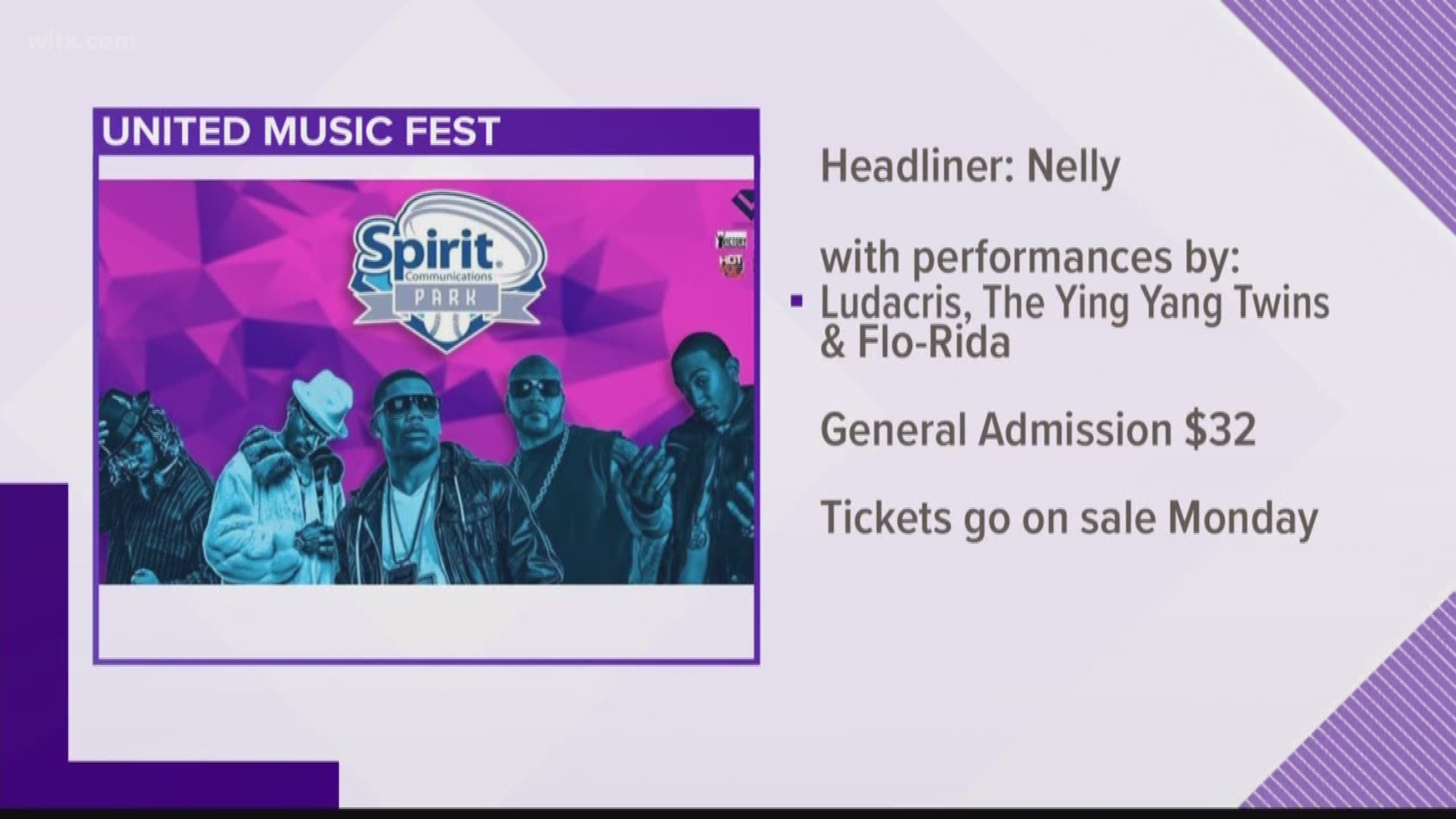 COLUMBIA, SC - The Columbia Fireflies, in conjunction with Alpha Media and Victory Promotions, today announced the full slate of talent to perform at the ballpark's first concert. United Music Fest is scheduled for Friday, September 7th at Spirit Communications Park.

Tickets will go on sale Monday, July 9 at 10:00 a.m. at the Spirit Communications Park Box Office, online at www.FirefliesTickets.com and via telephone at 803-726-4487.

"We're extremely excited to have the United Music Fest be the first major concert at Spirit Communications Park," said Fireflies team president John Katz. "Nelly, Ludacris and Flo Rida are all headline acts in their own right and having all three play the same gig is going to be amazing."

Diamond Selling, Multi-platinum, Grammy award-winning rap superstar, entrepreneur, philanthropist, and actor, Nelly, has continually raised the bar for the entertainment industry since stepping on the scene in 2000 with his distinctive vocals and larger-than-life personality.

Nelly embarked on his music career with Midwest hip hop group St. Lunatics, in 1993 and signed to Universal Records in 1999. Nelly entered the spotlight with the release of Country Grammar in 2000, spending seven weeks at #1 on the Billboard Top 200 and spawning the massive hits "Ride Wit Me", "Country Grammar", and "E.I.". The album landed Nelly four Grammy Award nominations and sold over nine million copies worldwide. Country Grammar is Nelly's best-selling album to date, selling over 8.4 million copies in the United States.

"We are extremely excited to be a co-promoter on a show of this magnitude," said Alpha Media director of entertainment and live events, Keisha Martin, MBA. "We are grateful for the opportunity. It will -- without a shadow of a doubt -- do record breaking numbers."

Ludacris is a rapper, songwriter, philanthropist and actor. He has won Screen Actors Guild, Critic's Choice, MTV, and Grammy Awards. Along with fellow Atlanta-based rappers Big Boi and André 3000 of OutKast, Ludacris was one of the first and most influential "Dirty South" rappers to achieve mainstream success during the early 2000s. In 2014, Ludacris was featured in Forbes list titled "Hip-Hop Cash Kings."

Born in Champaign, Illinois, Ludacris moved to Atlanta at age nine, where he began rapping. After a brief stint as a DJ, he released his first album Incognegro in 1999, followed by Back for the First Time also in 2000, which contained the singles "Southern Hospitality" and "What's Your Fantasy". In 2001, he released Word of Mouf, followed by Chicken-n-Beer in 2003 and The Red Light District in 2004. He took a more serious approach with his next two albums, Release Therapy (2006), and Theater of the Mind (2008). His next record, Battle of the Sexes, was released in 2010 and featured the tone of his previous albums. Ludaversal was released on March 31, 2015. As an actor, he has appeared in films including Crash (2004), Gamer (2009), and New Year's Eve (2011). He is best known for playing Tej Parker in The Fast and the Furious film series.

"I have done a lot of concerts in various cities, but I am extremely proud and excited to bring this one home to Columbia," said Victory Pernell of Victory Promotions. "It's exciting to help bring the first concert to Spirit Communications Park, and I am up for the challenge. We are definitely bringing in the heavy hitters. Our goal is to have a concert that everyone can enjoy, and I think we have achieved that."

Flo Rida is a rapper, singer, songwriter and composer from Carol City, Florida. His 2008 breakout single "Low" was number one for 10 weeks in the United States and broke the record for digital download sales at the time of its release.

Flo Rida's debut studio album, 2008's Mail on Sunday, reached number four in the US. The album was succeeded by R.O.O.T.S., the next year. His subsequent albums, 2010's Only One Flo (Part 1) and 2012's Wild Ones, also charted on the US Billboard 200 chart. Flo Rida has sold over 80 million records worldwide, making him one of the best-selling music artists. His catalog includes the international hit singles "Right Round", "Club Can't Handle Me", "Good Feeling", "Wild Ones", "Whistle", "I Cry", "G.D.F.R." and "My House".

The Ying Yang Twins are a hip-hop duo consisting of Kaine and D-Roc. The group debuted in 2000 and rose to mainstream popularity in 2003 collaborating with Britney Spears on her album In the Zone and with Lil Jon on "Get Low". In 2004 and 2005, Ying Yang Twins became more popular with party singles "Salt Shaker", "Wait (The Whisper Song)", "Shake" and "Badd". They have received notoriety for their song "Halftime (featuring Homebwoi)" which is played at New Orleans Saints home games after most touchdowns.