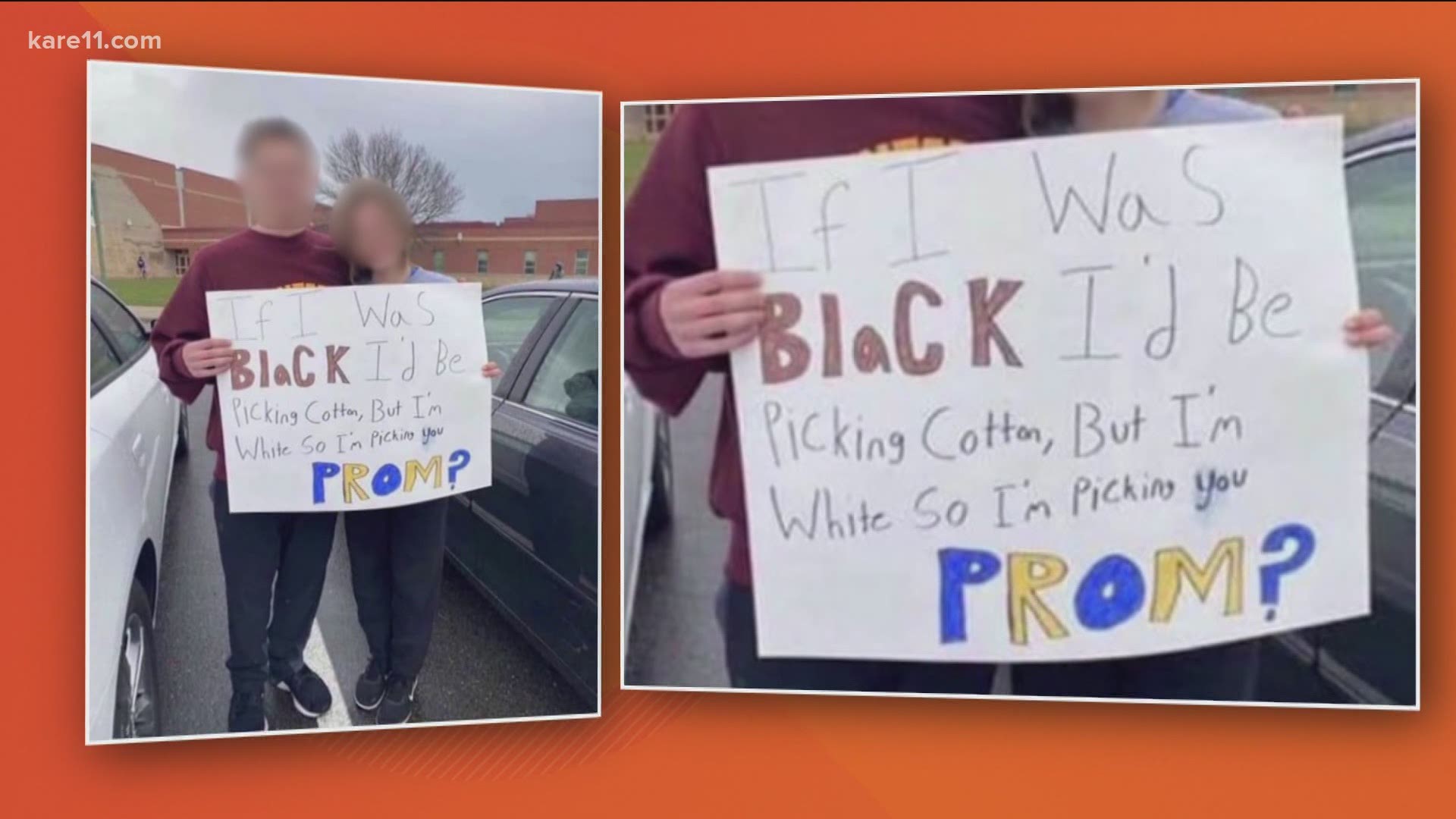 BIG LAKE, Minnesota — The Big Lake School District announced it will be going to distance learning for the remainder of the week after receiving threats after a photo showing two students with a racist "promposal" sign began to circulate online Tuesday.

According to a statement sent to families, the plan to go to distance learning for Thursday and Friday is due to safety concerns after receiving "a number of threats" towards their schools.

This afternoon we received a number of threats towards our schools for tomorrow and Friday in response to the “promposal” that occurred on Tuesday, April 27. In the interest of student and staff safety, all students (K-12) will engage in Distance Learning tomorrow, April 29 and Friday, April 30.

Due to the nature of this concern, our buildings will be closed tomorrow, April 29 and Friday, April 30. Kids Club/Hive Time, all Community Education classes, ECFE, ECSE, and all after-school activities/athletics are canceled. Little Learners Preschool will engage in Distance Learning.

We have had numerous conversations with local law enforcement and are working quickly to resolve this issue. Student safety is our top priority at all times.

Two white students, believed to be minors, appear to be standing in a parking lot with a hand-written sign that says, "If I Was Black I'd Be Picking Cotton, But I'm White So I'm Picking You. Prom?"

The school says the district does not sponsor the prom and said that the administration has responded and addressed the situation "in accordance with School District policies." Due to state and federal data privacy laws, the district is unable to comment on what specific actions were taken.

Earlier today, the Big Lake School District was made aware of a “promposal” post on Facebook that reportedly involved students using a racial comment. The School District is taking this report very seriously and is in the process of investigating this matter. We will be evaluating it under any and all applicable School District policies and will take whatever action is necessary and appropriate to address the situation. Due to state and federal data privacy laws, the School District is prohibited from sharing more information about this matter with the public about the specifics of this incident and the students involved.

Big Lake Schools does not condone racism, in any form. Our school has been committed to implementing the Hornet Way, as a way to develop and guide our students’ character and actions. The Hornet Way teaches the values of respect, honesty, kindness, responsibility, and fairness. We believe those values extend to all aspects of our school community. The School District also is committed to ensuring that all students and staff are treated equally and can attend school and report to work in a comfortable and welcoming environment. Our expectations are high and we expect compliance by all.

The school district has not released the names of the students involved because of privacy laws.