For the second time, a midlands church had thousands of dollars stolen by an employee. 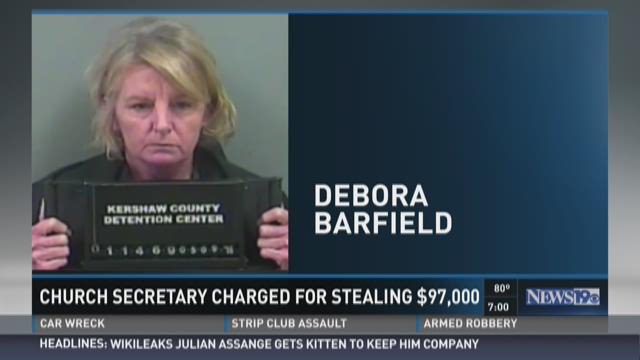 Lugoff, SC (WLTX) - For the second time, a Midlands church had thousands of dollars stolen by an employee.

"They're very vulnerable and this could easily happen to them, even by somebody they completely trust," said Kershaw County Sheriff, Jim Matthews.

"I've been coming here for a good little while and the people have been great to me," said Watts. "That's like anything, it's just one out of a bunch."

Barfield turned herself in to the Kershaw County Sheriff's Office on Monday. Sheriff Jim Matthews says the church realized something was wrong when she refused to turn in documents needed for an audit.

"She pretty much admitted to it and she went into a rehab program because she did have a drug problem, which was her reason for taking the money," said Sheriff Matthews. "So she could go to Columbia and buy her pharmaceuticals off the street."

This isn't the first time this same church has caught employees taking money.

Pastor Michael Leonhardt declined to go on camera, but spoke to News19 on the phone. He says Barfield was caught because of procedures they had in place. Those procedures were implemented in 2008 after the former pastor and another church employee were caught taking more than $130,000 dollars.

Pastor Leonhardt also released a statement saying in part, "We are a very loving, spiritual family, and we know we will get through this together. We are very proud of our Church leaders for following the procedures that we had in place which, in fact, helped us discover the financial discrepancies and led to the criminal investigation. We are also proud of our congregation for the wonderful way they have come together in support of their church."

Sheriff Matthews suggests churches perform two to four audits a year to catch any potential theft before it gets too big. He says this case, however points to a growing issue: drug addictions.

"It's a blight on our society. It's black and white and rich or poor, male, female," said Sheriff Matthews. "It's across the spectrum anymore."

Watts says if the church recovered from a similar incident once, he knows they'll be able to continue their work despite this loss.