HUNTERSVILLE, N.C. — CVS Pharmacy on Gilead Road in Huntersville recently received a reprimand from the North Carolina Board of Pharmacy for giving patients expired medication.

In a consent order, signed in March, the state found the mistake spanned the course of an entire year and involved a seizure drug.

"On 27 occasions between February 2, 2016, and March 7, 2017, (CVS) pharmacists negligently dispensed potentially expired Vimpat solution because they were not aware that Vimpat expired within seven weeks after the manufacturer's bottle was opened," the order said.

"Because (CVS) pharmacists were not aware of the expiration date, they returned partially used bottles to stock, failed to note when the bottles were opened, dispensed expired Vimpat solution to patients, and did not inform patients of the correct expiration date of the solution. These errors affected three (CVS) patients," the order said.

Records showed the pharmacist who managed the CVS location in question told the state the computer system used previously did not note the seven-week expiration date.

The state opened an investigation into the mistake after a patient reached out to the regulatory board in March 2017, according to NCBOP Executive Director Jay Campbell.

More often than not, when the state takes disciplinary action it's against people, not pharmacies. Campbell said the state opted against taking action against any CVS employees, including pharmacists, because this was a CVS issue dealing with a lack of training.

Even though CVS quickly took corrective action, the state still issued a public admonishment against the pharmacy two years after receiving the initial complaint.

"The health and well-being of our patients is our number one priority, and we have comprehensive policies and procedures in place to ensure prescription safety," CVS Corporate Communications Senior Director Mike DeAngelis said.

"The incidents referenced in the Board of Pharmacy's Consent Order occurred two to three years ago, and we took measures back in 2017 to ensure our pharmacy staff is informed about VIMPAT's seven-week expiration date from when the manufacturer's bottle is opened. Those measures include a reminder on the shelf where this medication is inventoried, as well as instructions in our pharmacy computer system for staff whenever a VIMPAT prescription is being processed," he added.

The Food and Drug Administration has long made it a point to discourage people from taking medication past its expiration date due to safety and efficacy concerns.

Campbell encouraged any person who has concerns about his or her pharmacy, pharmacist or technician to share those concerns with the state pharmacy board. Patients can file complaints online or call the board directly at (919) 246-1050. 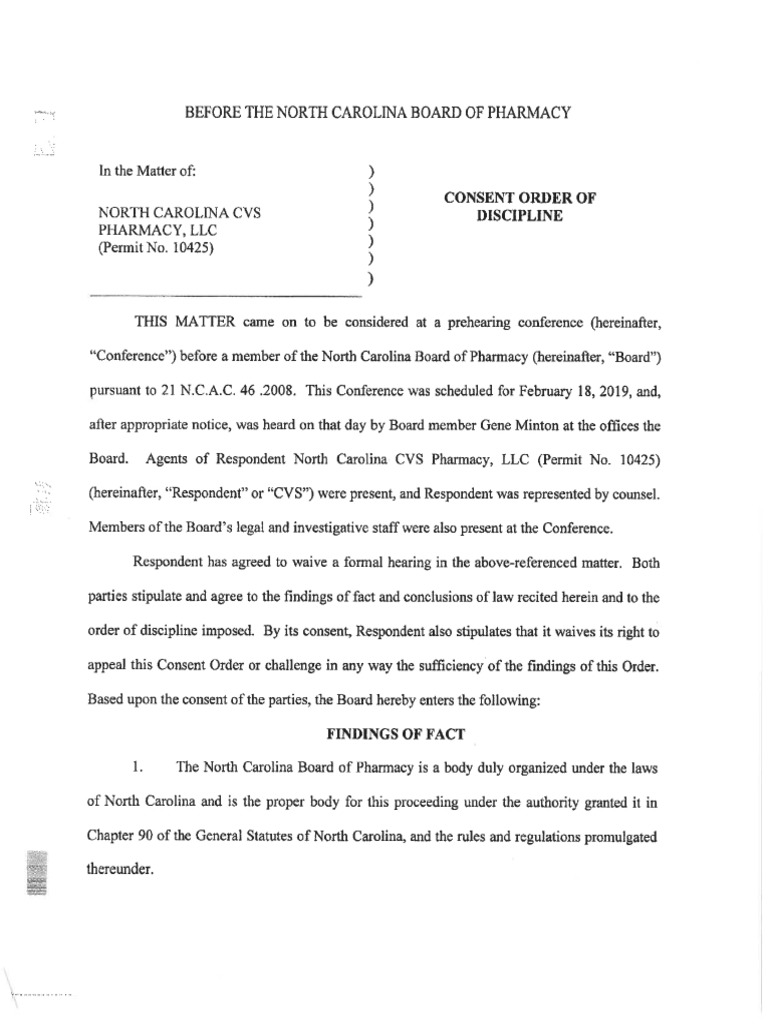 CVS Consent Order
te BEFORE THE NORTH CAROLINA BOARD OF PHARMACY In the Matter of CONSENT ORDER OF NORTH CAROLINA CVS DISCIPLINE PHARMACY, LLC (Penmit No. 10425) 'THIS MATTER came on to be considered at a prehearing conference (hereinafter, "Conference") before a member of the North Carolina Board of Pharmacy (hereinafter, "Board") pursuant to 2] N.C.A.C.

The best movies to see this weekend