Delta-8 is the latest fad in 'legal' cannabis products. 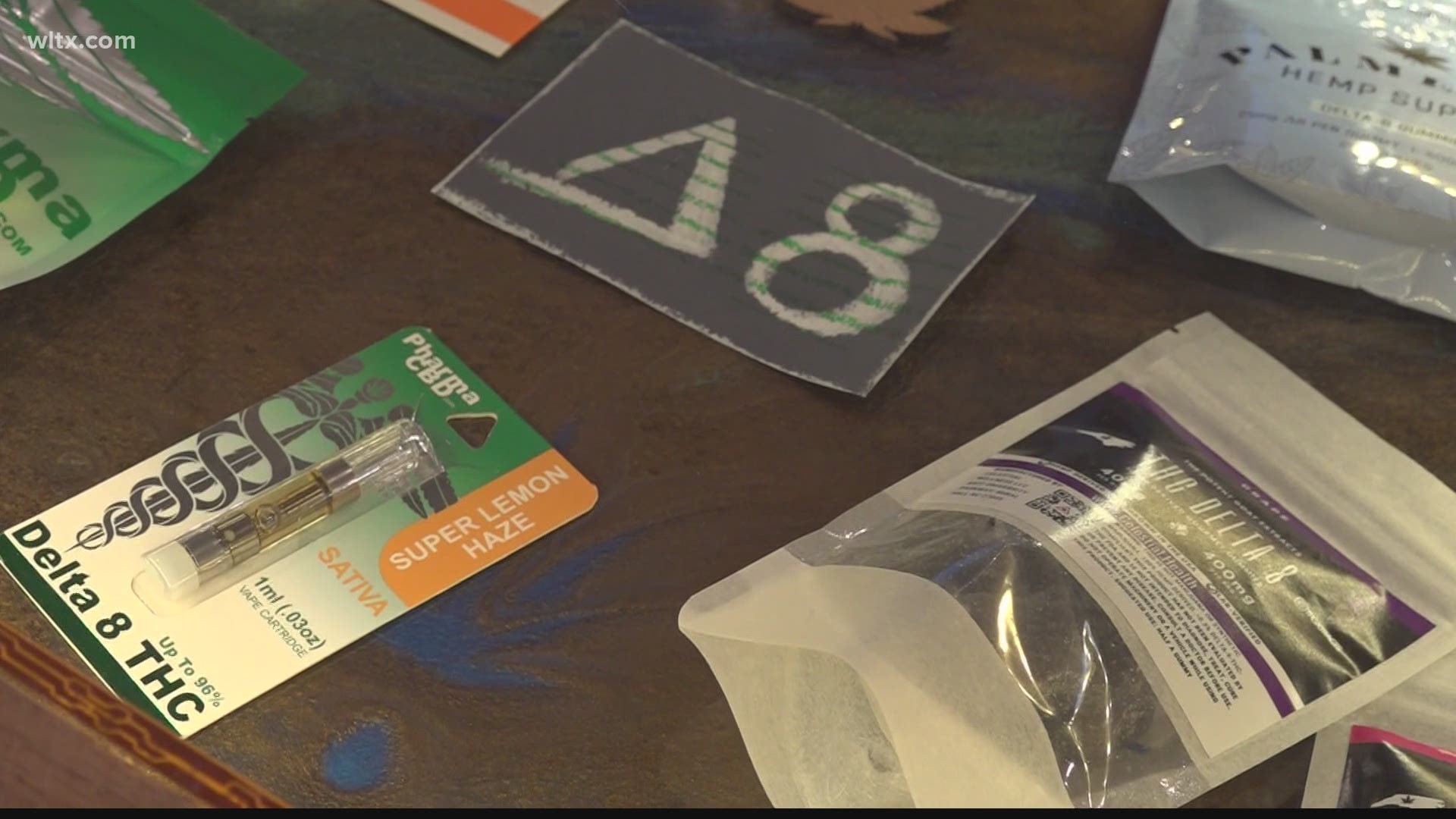 COLUMBIA, S.C. — 'Delta-8 THC' is emerging as one of the newest cannabis products on the market, and it's showing up in Columbia.

According to the US Drug Enforcement Administration (DEA), Delta-8 is considered a Schedule 1 Controlled Substance.

In recent months, some states have chosen to ban the substance. Right now, however, South Carolina has not banned it.

Shelby Febro is a hemp specialist at Charlotte CBD in Five Points. She says more and more people are asking about Delta-8.

"A lot of people come in here because they don't want to get crazy high - they're not looking for that," Shelby tells us. "They're looking for the distraction from all kinds of different things, the anxiety, the stress, a lot of times it's the pain."

Elli Free, 21, first used Delta-8 in a vaporizer and knows other people her age that have used the product as it has grown in popularity.

"It's definitely a little bit more, like you definitely can feel something more where CBD is just a calming overall experience, but the Delta-8 almost gets you ... Like marijuana but not marijuana, if that makes sense," Free said.

Dr. Prakash Nagarkatti, Vice-President for Research at the University of South Carolina, has been studying cannabinoids, the active compound of cannabis, for almost 20 years.

"Right now, it's a gray area," Dr. Nagarkatti said about the new product.

"The marijuana and the hemp plants, they have over 100 cannabinoids that bind to certain receptors in our body," Dr. Nagarkatti explains. "Some of those are THC, that make you feel 'high' or 'euphoric,' but can also be compounds like CBD that can relieve pain or calm your body."

One of the substances that contains high levels of THC and are found in large quantities in the marijuana plant is called 'Delta-9 TCH,' a step up from Delta-8.

"But, Delta-8THC, I call it a small cousin of Delta-9 THC in that it's structurally similar to Delta-9 THC but it does not make you very high. And the second important thing to remember is that the Delta-8 THC is found in very small concentrations in both the marijuana plant and the hemp plant."

This THC level is the difference between an agricultural product and a regulated drug. Because Delta-8 is derived from the Hemp plant and usually falls below this percentage of THC, South Carolina licensed hemp stores are selling it.

According to the South Carolina Hemp Law, the hemp plant is legal to grow and use in the state, but it has to have a THC level below a federally defined percentage, which is .3%.

Chief Courtney Dennis of the Irmo Police Department is warning people to be wary. "Just be careful with these products. Just because they say one thing doesn't mean that that's exactly what's in it," Chief Dennis said.

According to Chief Dennis, products they pull from shelves are continuously testing much higher than the regulated .3%.

"It's lacking a lot of FDA approvals and regulations so when you're eating these cookies or smoking these different plant-like materials … just because it says it contains .3% or less doesn't mean that that's true," he said.

Chief Dennis says they don't see it everywhere, but Delta-8 products are popping up more and more in gas stations and licensed hemp stores.

As far as the safety of Delta-8, Dr. Nagarkatti says they just don't know enough yet.

"Clearly, I think we need to do more studies both clinically as well as in the laboratories to find out precisely what are some of the beneficial as well as the toxic effects of Delta-8 THC."

According to Palmetto Poison Control, there is no official guidance on Delta-8, but they have already come across the product. They have had parents call in about children gaining access to the product, and have recommended a trip to the emergency room. They say the potential dangers of Delta-8 remain unclear.