Faye's smile and bright personality captured the hearts of those in the community and across the country after her tragic death in February 2020. 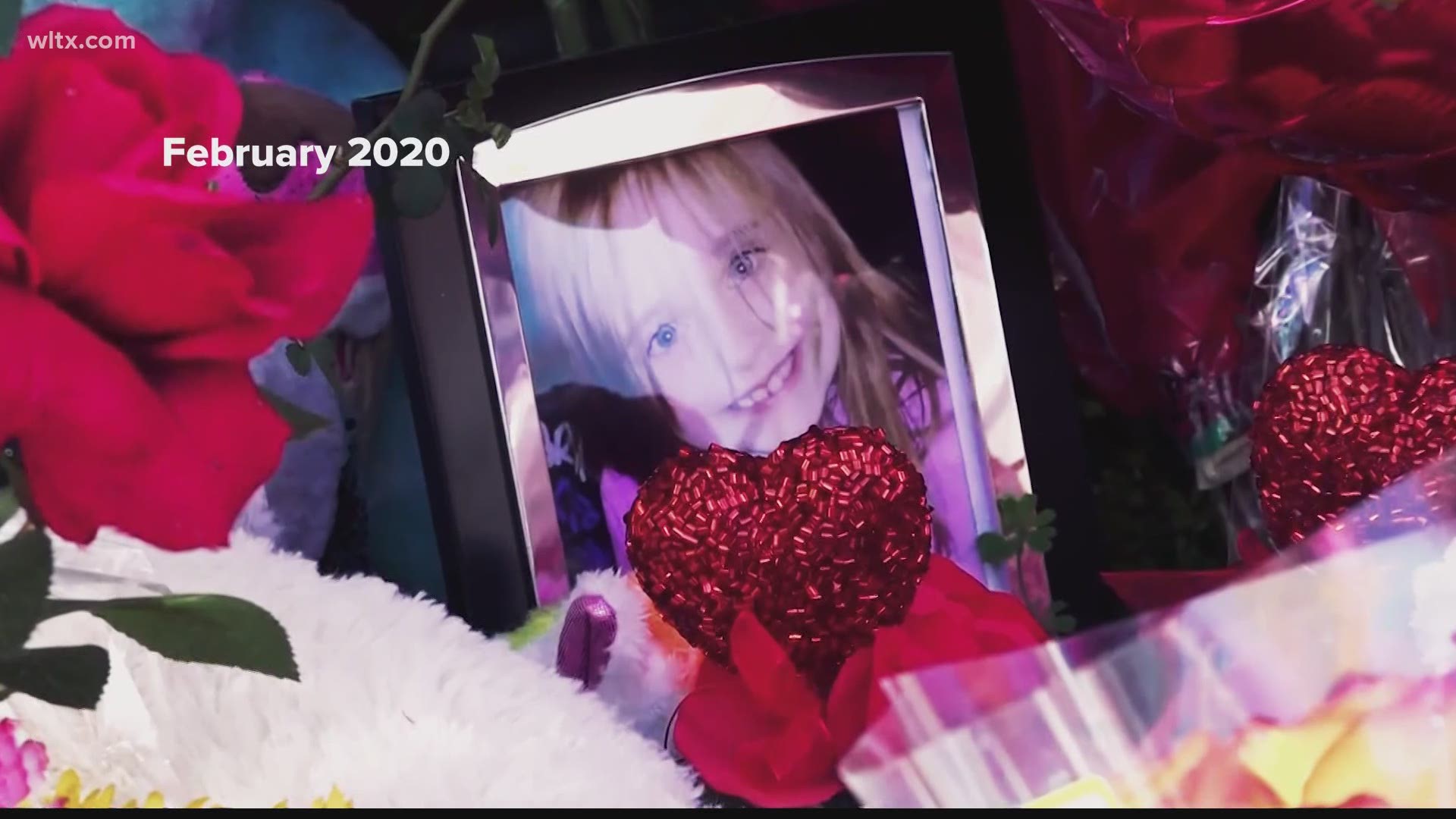 CAYCE, S.C. — A year after the death of a missing six-year-old in the City of Cayce, her parents and law enforcement who searched for her reflect on the impact and legacy Faye Marie Swetlik left behind.

Who is Faye Marie Swetlik

Faye was a bright six-year-old who lived in the Cayce community and was a first-grader at Springdale Elementary School.

No one knew her better than her parents, Selena Collins and Chad Swetlik.

Because of that energy, Faye rarely stopped to eat. She could be seen running around playing while having chicken nuggets in her hand.

Faye was also big on complimenting people. She wouldn't mind going up to people she didn't know and tell them she liked what color they were wearing or she liked their hair.

“She’s a very social butterfly. She will talk to almost anyone,” said Chad Swetlik.

The six-year-old also never wanted people to be sad. She made every effort to make sure the people around her were happy.

On February 10th, 2020, the first grader was playing outside her home in the Churchill Heights neighborhood just down the road from the Columbia Metropolitan Airport. Soon after she disappeared.

"When we got the call, our intuition was this was a serious case," said Cayce Department of Public Safety Director Byron Snellgrove. "I arrived on the scene of that call in Churchill Heights at approximately 5:40 pm on February 10th. By 6 pm, I had contacted neighboring police and fire departments, as well as SLED and the FBI, to join in our efforts of searching. There was one primary directive and that was to find Faye.”

Director Snellgrove says this search was one of the largest, if not the largest, search of its kind in the history of South Carolina.

Multiple law enforcement agencies, including the FBI, assisted in looking for the six-year-old.

Helicopters were seen flying above the area, countless flyers were placed around the Midlands at businesses in hopes somebody would find Faye and bring her home safely.

On February 13th after multiple days of searching, law enforcement found the body of Faye not too far from where she once lived.

“For me, after 65 hours of searching, the memory of finding the small body of Faye Marie Swetlik in a shallow grave on the morning of February 13th, 2020, will never, ever leave me,” said Director Snellgrove. “I’m sure that the officers who watched over her in the hours and days after her discovery will forever hold those memories as well.”

After finding Faye, moments later law enforcement discovered a man nearby who had committed suicide.

The Cayce Department of Public Safety announced the man, who was a neighbor to Faye, believed he killed Faye hours after she was reported missing. Law enforcement believes he committed suicide days later, the same day Faye's body was found.

Despite the large search, Director Snellgrove says everyone was heartbroken they didn't have the result they were hoping for.

“Sadly, this extraordinary effort and work did not give us the ending to the case we had hoped and prayed for," explained Director Snellgrove. "It did however helps us find her, bring closure to the family and showed the heart of this community, state and nation.”

Once people heard the news about Faye, a memorial began to grow outside the Churchill Heights neighborhood.

Many people in the community and around the area brought flowers, stuffed animals, letters and much more to remember the little girl's life. In the days that followed, the memorial continued to grow.

Candlelight vigils and memorials were held in the area at local churches and at Cayce City Hall so people could remember Faye.

In the months that followed, community members came together to find ways to remember the little girl. This included Faye's rocks and buddy benches being made.

On September 22nd, the Town of Springdale honored Faye by dedicating a buddy bench in her honor. The six-year-old used to play at Felton C. Benton Park.

"This is a great way that we can remember her and it's a very bright bench. She was bright colors and stuff that she enjoyed," said Town of Springdale Police Chief, Andrew Richbourg. "Hopefully it brings some sort of happiness and remembrance of her and not the negative."

The town also declared September 22nd as Faye Day because it's the first day of Fall and the start of her favorite season.

"The buddy bench, the community really has reached out to that and enjoyed it. There’s actually three of them," said Director Snellgrove. "The family has one, there’s one in Springdale and there’s one in Springdale Elementary. It’s good to see the kids sit on it and play around it. I think it’s therapeutic and I think it’s helpful to the community.”

Collins says the benches have been a light for her.

“The buddy benches have definitely been one and they are definitely very hard to miss. They have most definitely been a very bright spot in something that was very dark. And then the support of love that I’ve had from my family and the community," said Collins.

"The light can change from day to day for what it could be, but for the most part it has been the remembrance of who she was and who she wanted me to be that kind of just gets me out of the darkness most of the time,” explained Faye's mother.

As the parents have gone through the pain of losing their daughter, they say the community support has made a big difference.

"I appreciate on a very deep level everything that the community has done and it really kind of just speaks to me that at the end of the day, people are basically good and they are willing to ease the burden of another community member as much as they can," said Collins. "It restores constantly a lot of my faith.”

“It’s really touching. I’m happy that the community is behind us and everything," explained Faye's father. "I’m hoping they do that for others, not just for this one case. It’s really nice to see everything that everyone’s doing trying to bring her hopes up and doing what they can."

Director Snellgrove believes the investigation has had a tremendous impact on his department.

"We had several officers within the department that were of retirement age and had the years in to do that, it affected them enough to where they over a six-month period of time to decide to retire," said Snellgrove. "So we lost five of our officers to retirement after this case."

The FBI says five officers was about the number they would expect the Cayce Department of Public Safety to lose.

“The community has been so good to us, not only with just Faye’s case, but with everything that has happened since with the riots and with COVID and everything else," said Snellgrove. "We’re still getting cards from school children, churches, just members of the community telling us how much they appreciate us, how much they thought of the work that we had done on these cases. They really are the reason that we’re here."

The director says he and other officers have participated in counseling since the investigation.

He also says the FBI uses some of this case to help train people nationwide. Some of the officers with the department have been sent to class with the FBI to learn more about child abductions.

"We are doing more training. We, I think, are now much more sensitive to issues that come up with children," said Snellgrove. "Of course it’s going make you more sensitive in those situations. All of the other cases that we’ve had where a child was involved have turned out very well, but you have to remember this anytime you get a call about a juvenile.”

The director says Faye's case is still open because some evidence are out there and they have not received reports on them at this time.

“Faye was a bright, young, six-year-old girl. Her life being cut tragically like this can have a positive affect. And we hated that that’s the case, but positively the community and the department have come together and have grown together and really become one," said Director Snellgrove.

The department says they continue to support the family in any way they can.

"The family knows that if there’s anything that they need and anything that we can do for them to help them in any situation, not just specifically about Faye, that they can call us anytime day or night," explained the director. "And we do have a good bond with them and stay in touch often."

Collins and Swetlik says it means a lot to have the department for support.

“They have basically become family and it’s nice," said Collins.

Swetlik said, “Really glad we have them helping us with all this, what’s been going on. I’m really glad that they’re in our lives now.”

While this situation has been a tremendously difficult time for the family and the community, Faye's parents want people to remember the great things about their daughter and her smile.

“I wish everyone can find there Faye, like with that energy and everything that she did for us, hopefully someone can find that in maybe someone else," said Swetlik. "A friend, a stuffed animal, just something that will remind them.”

“No matter how bad or how dark everything seems and this past year has been tremendously difficult for everybody, and no matter how dark or how unbearable it may all seem, there is light to be found," said Collins. "You just need to know where to look for it, but it’s always there.”

A portrait of the six-year-old is placed in Director Snellgrove's office as a reminder of Faye. He says a wife of one of his officers made the portrait.

When Director Snellgrove spoke with News 19, he wanted to say this to Faye:

“Faye, little girl, your life was a blessing and touched so very many. Your beautiful smile lit up a room every time you entered it. You touched the heart of every person that you encountered. Your memory remains a treasure for those you left behind and it always will. We know that you are now one of God’s little angels looking upon and guiding us as you fly high above... So fly high and watch over us. Fly high, God’s little angel, Faye Marie Swetlik.”