While Doug Long was protecting the United States of America overseas, he also dedicated time to earn his college degree. 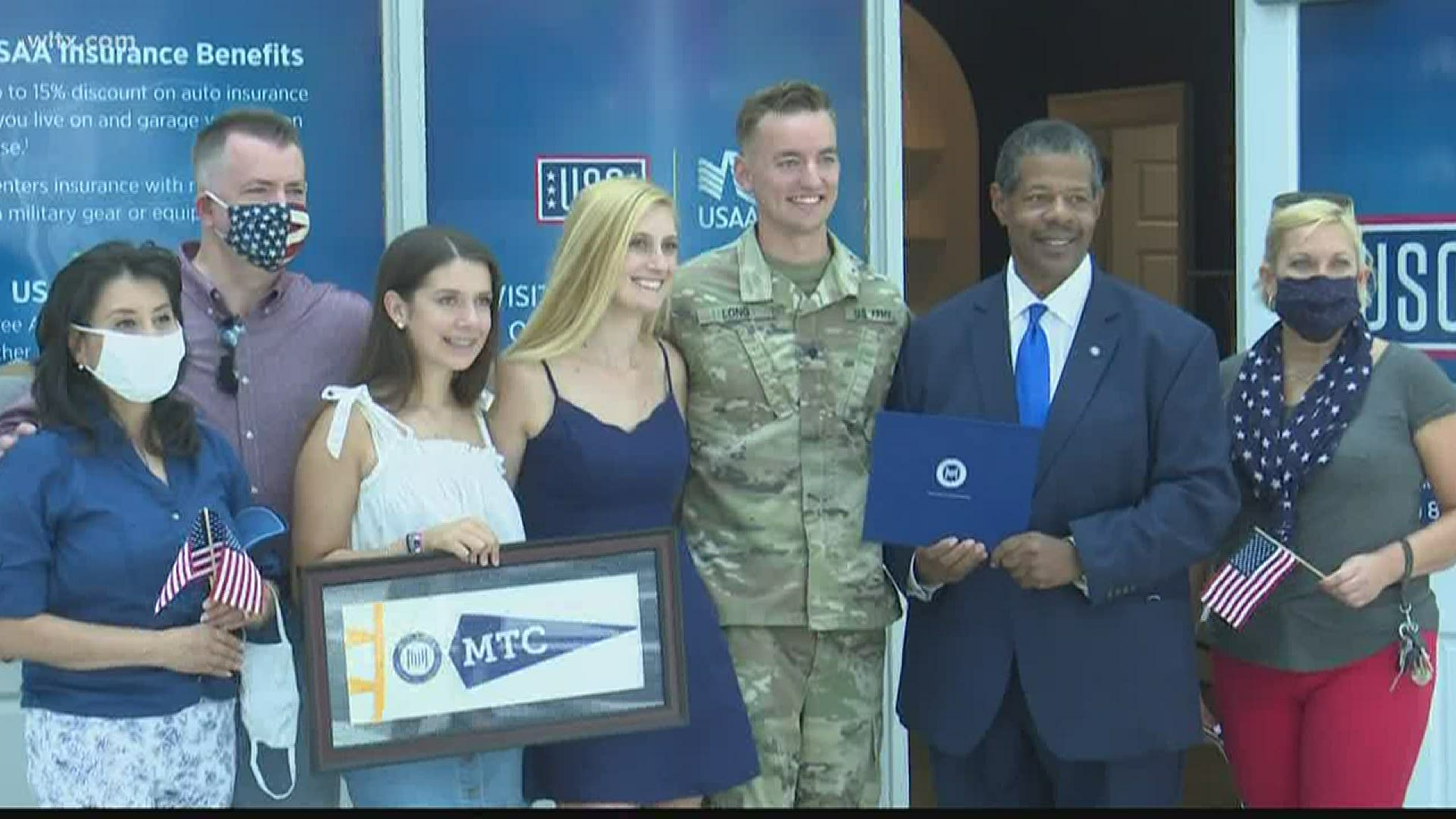 WEST COLUMBIA, S.C. — A South Carolina Army National Guard soldier was reunited with his family and surprised with his degree when he returned home Friday from serving overseas.

U.S. Army Spc. Douglas Long with the 4-118th Infantry Battalion, hasn't seen his family since August of 2019. He was deployed overseas in the Middle East.

Addison and Long's family went to Columbia Metropolitan Airport on Friday for a day that feels like they've waited an eternity for. They all wanted to be there to welcome the guardsman home.

Brian Long, Doug's father, says the family is proud of everything he's done.

"You can imagine how it feels to have your youngest son walk away from you in Texas almost a year ago and have to get on a plane knowing you're not going to see him for about a year," said Brian.

"It's been a roller coaster for the whole family," said Laura Long, Doug's stepmom. "We're definitely so proud of him and so proud of all these guys that make it possible, everything we have here in America."

While Doug was serving his country, he also was working on earning his college degree. He was attending classes at Midlands Tech to earn an Associate's Degree in Building Construction Technology prior to be deploying. Since then, he's been taking online classes.

"He's always been a hard worker, go getter," said Addison. "He owned his own business in high school and he wanted to join the military and with him overseas, when everyone else would go to bed, he would stay up and do school work and I'm just so proud of him."

The moment Doug's family and Addison had been waiting for almost a year was finally here. Doug walked off the plane at Columbia Metropolitan Airport, greeted at the gate with his fiancee running into his arms.

"It's great to be back," said Doug. "Love the state of South Carolina. This is pretty much where I've grown up for the most part of my life. Going overseas, this is my first time, it was an uncomfortable experience. It's new to all of us, but I think it was something we can all push through."

"The hardest part is not getting emotional for a whole year and knowing and praying continuously every day for their safety, for the troop's safety, for travel safety, safety of the country in general," said Wright. "Then you get the call, then you get a date and you get a time that you know you're going to see your baby again.

He got his degree, and now he’s back home! We’re excited to welcome back Spec. Doug Long who completed his MTC degree while also serving overseas 🇺🇸.

What a wonderful moment to celebrate an amazing achievement. More behind the scenes footage to come 🎥! pic.twitter.com/rk794kHVQw

One thing the guardsmen didn't expect was being surprised with his degree. Midlands Technical College wanted to reward him with his Associates Degree in Building Construction Technology and his certificate as a Carpentry Qualified Framer.

There were times Doug had to be up at two or three o'clock in the morning to study or take a test. He also had to deal with trying to have reliable internet access because of where he was located while overseas.

While it wasn't easy, Doug wanted to make sure he earned his degree.

"One of those things that I told myself, I need to finish this before I get back because there's other things I want to grow and do when I get back and so I just wanted to make sure I got it done and got it taken care of because I think that's important," said Doug. "You need to finish what you started."

RELATED: Two Charlotte boys are taking part of a mission to mow 50 lawns for free

Midlands Technical College has been working with Fort Jackson for more than 25 years.

Ronald Rhames, President of Midlands Technical College thought it was fitting to surprise the guardsmen when he returned home surround by family.

"This is an exciting time. This is quite a young man," said President Rhames. "This young man went away to Iraq and Kuwait to defend our liberties here in America. While away, he took five online classes to complete his degrees. So that's just an amazing story. We are so proud of him. It's an extension of our commitment to the military community here in Columbia."

Rhames said Doug did an amazing job managing what he had going on in the military and his school work to help earn his degree.

"Being in the military and doing his military things, that had to be very difficult and so that makes this achievement even more remarkable," said President Rhames.

Leaders with the South Carolina National Guard, including Major General Van McCarty, were at the airport to welcome Doug home and congratulate him on his achievement.

"I appreciate you what you did," Major General McCarty said to Doug. "You did not only your job, but you went above and beyond. That's the kind of leader that this organization needs and that's the kind of people we want to stop and say,' Thank you. Job well done.'"

Wright says she's happy to see what her son has accomplished.

"You're proud and you're excited and it's not even my accomplishment," said Wright. "It's watching somebody else grow that you've watched grow from infancy and you really watch your child excel and that's what every mom's joy is ultimately, is to see her child do great things."

Doug has this message for anyone who is multi-tasking and wanting to earn their degree.

As for what's next for the guardsman, he and his fiancee plan to get married in December on the five-year anniversary of when they started dating.

RELATED: The US Navy's first Black female tactical jet pilot gets her 'Wings of Gold' Friday