A21, an organization to advocate to stop human trafficking, marched down Main Street in downtown Columbia. 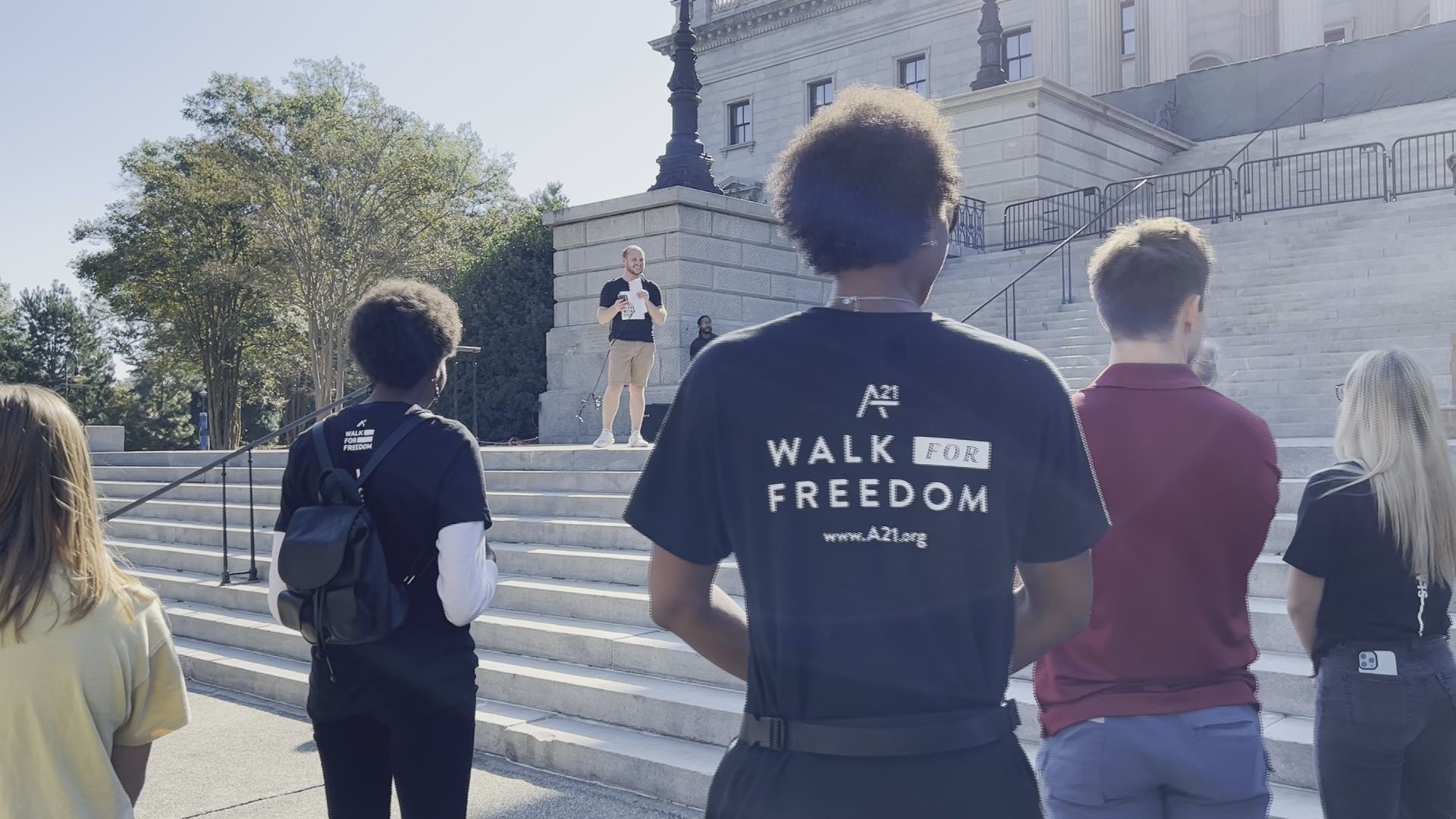 COLUMBIA, S.C. — A group in Columbia marched Saturday to advocate for the 40 million people enslaved across the globe.

According to the victims' service agency Safe Horizon, around 25 million people in the US are enslaved in human trafficking. And that comes in all forms, sexual exploitation, labor trafficking, and more.

“A million is a statistic until you meet the one."

That’s a quote from Christine Caine, the founder of A21 and chief advocate for ending human trafficking.

“Her goal, her mission for this organization that’s been around for almost a decade now, is to continue meeting the one, continue going to the individuals who’ve been enslaved, continuing to set them free, and not only setting them free but setting them on a path for restoration so they can get back into society, back into the communities and live a whole and full life again,” Dylan Gunnels said.

When you show up locally to raise awareness in your city, young victims like Oleg* are educated about human trafficking and more likely to avoid possible trafficking situations. Freedom hangs in the balance in cases like this. This is why we raise our voice to spread awareness. pic.twitter.com/ctSZwuiOcR

Gunnels heard about this fight and wanted in.

"I want to say that I know this conversation can sometimes feel awkward or be uncomfortable because these are harsh realities of what is happening to human beings," Gunnels said. "But engage in these conversations because unless everybody’s free, we’re not free.”

Gunnels organized Columbia’s "Walk to Freedom," where a group of around 50 walked silently in single-file down Main Street to the Statehouse holding signs with their message. It's something thousands around the world have done every year since 2008 to raise global and local awareness.

“Knowing that there’s over 27 million people enslaved around the world is huge," said one attendee, Enrica Berrett. "And many people need to know today so I’m glad that they hosted the walk today for us and we were able to be apart of it to spread that message and be that voice.”

Prayer invites the power of God into the fight with us. Fight with intentional prayer each day of the month.... pic.twitter.com/bPPsEL9PZJ

State Attorney General Alan Wilson said in a report there were 139 cases of human trafficking and 179 victims reported in South Carolina in 2020.

Groups like Lighthouse for Life, Richland County Anti-human Trafficking Task Force, and A21 work to eradicate forced labor both in South Carolina and across the world.

“Equity should be the center of these conversations no matter what," Gunnels said. "No matter if you’re talking about race relations, gender equity. Even when we’re talking about human trafficking, that needs to be at the forefront, too. So equity and freedom are important.”

‘A Walk to Freedom’ @A21 pic.twitter.com/umtJZ97QEy