'I wish mercy for you:' Ex-wife doesn't think child killer should get death penalty

The ex-wife of Timothy Jones Jr.--and the mother of the children he murdered--doesn't want him to be put to death. 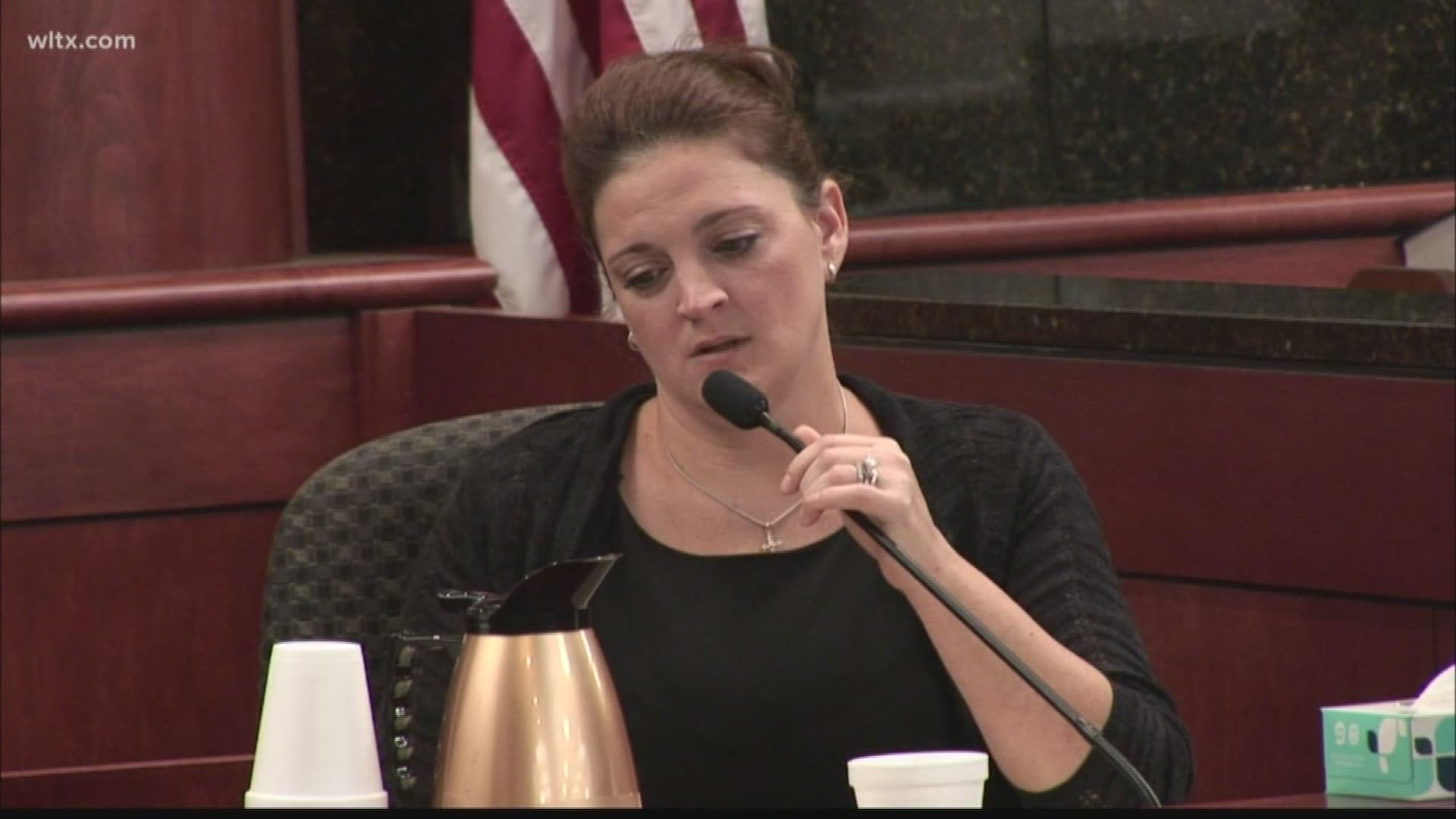 LEXINGTON, S.C. — The mother of the five children murdered in South Carolina says the man who killed her children shouldn't be sentenced to die, but she understands if the jury reaches that conclusion.

Amber Kyzer, who's the ex-wife of Timothy Jones Jr., the man convicted of killing the couple's children in 2014, testified Tuesday during the sentencing phase of his trial. A jury is hearing testimony as they decide if he deserve the death penalty or life in prison.

In a surprise move, Amber Jones Kyzer took the stand Tuesday afternoon as a character witness for her ex-husband Tim Jones Jr. She entered the courtroom after the lunch break with lead defense attorney Boyd Young.

It was only May 20 when Kyzer took the stand to testify against Jones for murdering their five children. That day, she broke down on the stand and had to be lead out of the courtroom after giving a very emotional testimony.

Today, Amber sat in the back of the courtroom, behind her ex-husband, while her new husband and mother-in-law sat across from Tim Jones Sr’s current wife and sons. Amber smiled at Julie Jones (Tim Jones Sr's wife) on her way to the witness stand.

When she took the stand, Young asked her who she was here for “My babies,” she answers.

"In the beginning Tim and I had a strong relationship. Later on, any little thing would spark an argument it became aggressive at times, violent. Towards the end of our marriage I was thinking about the best interest of my children so we separated.

RELATED: 'My babies should be alive:' Mom of 5 SC children who were killed testifies

"Tim initially left and turned off the power. I couldn’t provide for them, I trusted my husband. He gave me no reason to believe otherwise.

"I don’t think anyone saw this coming, not her or anyone in the Jones family." She testified that she loved Tim, "not everything in the marriage was bad."

"It comes a point where it becomes volatile and you make a choice to separate from this person."

Kyzer testified that "when I heard what my kids went through and endured -- if I could personally rip his face off, I would to make him feel everything they felt."

She continues that she doesn't not want to put the Jones family through what she went through when she found out her children were dead.

"I pray for Tim often, and his family often, and my family" who didn't get to know the children.

"I can’t bring myself to want anyone to die." she says. "This is something I have to live with. There has been a lot of loss on both sides. I had eight babies with Tim: five live births, two miscarriages and one stillborn daughter."

Young asks Kyzer: do you want mercy for Tim? She responds, "I do and I don’t say that lightly. He didn’t show my kids mercy but I have to speak for my kids. (turning to Jones:) Nothing justifies what you’ve done and there's nothing that you could say that would justify what you did to the kids.

On cross-examination, Deputy Solicitor Suzanne Mayes says Amber could “stay there all day and still not spill out the contents of your heart.”

Amber says she’s been keeping up with the trial and wants to clear some things up:

The decisions she made she made about Tim being primary custodian of the children were financial, she loved the kids. “They were loved, they were wanted and they were important,” she said; she never told them she didn’t want them.

Tim Jones knew she loved and wanted the children.

Mayes asks her what lead her here today — she was subpoenaed by the defense team.

She testifies that she didn’t want to be the one to decide Tims fate — “thats why we have a jury.”

The State never asked Amber to take a position on Jones’ fate. Amber says it was never her decision, that she wants the Jones family to know that, and respects the decision of the jury — and of the state to seek the death penalty. She has always been anti-death penalty.

“Any mother would want to shred the face off of anyone who would harm their kids,” she says. “I spoke very openly about that.”

She says was finding out about what happened to her children along with the jury and the rest of the world as the trial progressed.

Amber gives an example of the volatile relationship she had with Jones: She said she and Tim got into an argument at Walmart. Tim was driving the car back home, the kids were in the back seat, Amber in the front passenger seat. During the argument, Tim steered the car towards the path of an oncoming 18-wheeler — aiming the car where the truck would hit Amber, and the kids — pulling back at the last minute. She says she reported the incident to law enforcement.

RELATED: Grandmother, dad of man who murdered his children ask for his life to be spared

She testified she reported another incident when Tim grabbed her by the side of the head and slammed her head until she passed out and threw a phone at her face and broke a tooth.

She believes that the oldest two children saw some of the abuse — Tim spitting in her face; breaking hard with her in the car while she was pregnant so that the seatbelt would tighten around her stomach; when he would tell her he’d chop her up and feed her to the pigs — all of the incidents that contributed to her leaving the marriage.

“When its like a tornado in a hurricane, there’s no coming down from it,” she testified.

When they went to Tim Jones Sr’s home, it was a break for her; when they moved to South Carolina, it was like a prison for 9 years.

Amber testified that he videos Tim sent to her phone “crushed my heart because they were my babies.”

She felt Tim was using Merah and Elias as bait to manipulate her into coming back to him. It was emotionally draining on her.

“I’m not going to sugarcoat things for anybody,: she says. She takes on some of the blame for the break-up.

“I thought we were coparenting fine at the time (in August 2014). We were volatile — on both ends.”

She testified that Tim made the schedule for her to see the kids, but didn’t want her mother-in-law to drive her to meeting spots;. “When you make Tim made, you make Tim mad,” she says. “There’s either this or nothing at all.”

Mayes asks Kyzer about the character of the defendant… is manipulation part of it? “Yes,”she says, he can manipulative, be coercive and stubborn.

She testifies that her fondest memory of Nahtahn is of the little boy jumping out of TIm’s car and running toward her at the Chick-fil-A, calling to her, “Mommy!,” and the tight hug he gave her.

Kyzer said she defended Nahtahn and Merah the most from Tim. Nahtahn was very bold and didn’t withhold his feelings, felt Tim was resentful.

She testified that she didn’t think that putting the kids through a tug-of-war in a custody battle was best for the kids.

She said that Tim Jones had told her more than once that she would never have the kids. Amber reiterates that it was her choice — as a mother — to give her children the best option to succeed with Tim.

Then she got a car, got her driver’s license, got a management job at Walmart, then got her high school diploma.

She found out about Crystal living with Tim when guardian ad litem stepped in and told Amber about Crystal babysitting and Tim’s involvement with her.

Kyzer was offended that she was accused of having a relationship with a 17 year old (he was really 24, Amber 27) when it was Tim (Crystal was 19).

On redirect, Young asks Kyzer: despite everything you went through, do you want Tim to die? She answers: No, but I’m not the one making that decision.