Ashley Solis said she's sharing her story about Watson to "take back the power and take control" and she's "not afraid anymore" to go public. 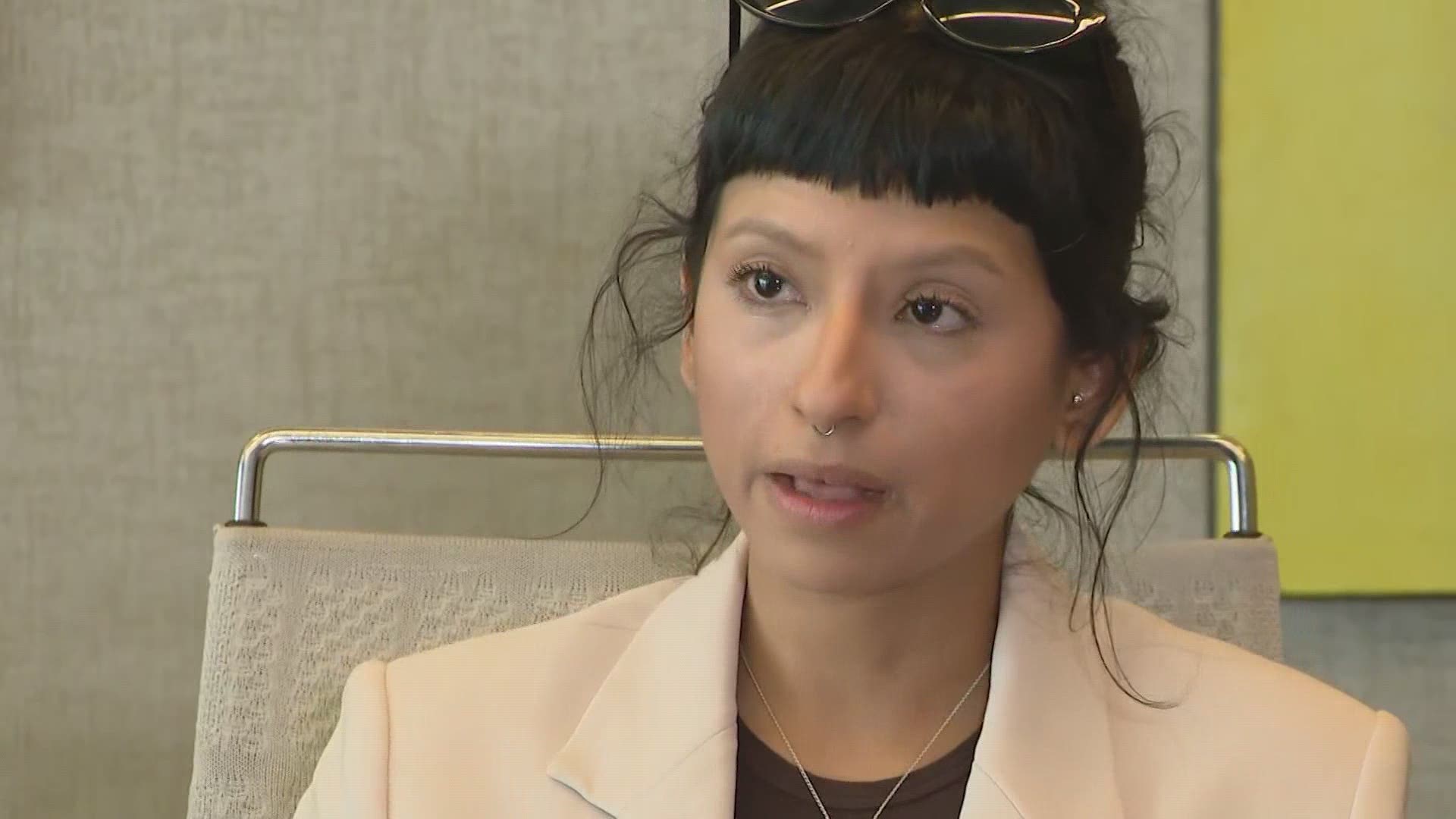 HOUSTON, Texas — The first of 22 women to sue Deshaun Watson for sexual misconduct is no longer "Jane Doe No. 1."  Ashley Solis went public with her story for the first time at a news conference Tuesday.

"It has taken me a long time to get to this point to come out publicly and speak my truth. I was afraid. I’m not afraid anymore," Solis said. "I am here to take back the power and take back control."

Watson's attorney Rusty Hardin later fired back and said Tony Buzbee asked for $100,000 in "hush money" for Solis before filing the lawsuit against the Texans quarterback. (Scroll down for Hardin's full statement.)

The massage therapist said Watson sexually assaulted and harassed her in her home on March 30, 2020 after contacting her through Instagram.

According to the lawsuit, Watson repeatedly asked Solis to focus on his groin area. She said he “purposely” exposed himself and “purposely” touched her with his penis.

RELATED: Deshaun Watson was professional, polite during massages, according to statements from 18 massage therapists

Solis abruptly ended the massage and Watson later apologized, according to the civil assault lawsuit.

"I replay the incident over and over in my head as if I’m trying to wake up from some horrible nightmare, only this nightmare is real," Solis said Tuesday. "I feel a range of emotions: guilt, embarrassment, shame, courage, anger, sadness and numbness. Some days I feel like a hero. Other days I feel like a failure."

She said she's saddened by the victim-blaming in the media and in online comments.

"I blame myself at times, which is insane. Society has groomed women to believe that it’s their fault … as if, somehow, we asked for it or we could have prevented it."

Solis hopes others who hear her story will gain the courage to speak out.

Attorney Tony Buzbee, who represents Solis and 21 other Watson accusers, said he discouraged her from coming forward.

“Ashley Solis is a very brave person," Buzbee said. "She is a pioneer. She will not be bullied."

Watson has called the allegations "baseless."

A massage therapist named Lauren Baxley is also going public with a letter she wrote to Watson.

"I am furious that the talented and hard-working young black man that gave so many children inspiration is nothing more than a predator with power," the letter read. "I am heartbroken for your family, for your loved ones, for those coming to terms with the fact that your charitable work and good-guy persona are nothing more than a meticulously designed façade to keep your victims silent," Baxley said in the letter.

An attorney working on the case with Buzbee read the letter on Baxley’s behalf during the news conference.

"At a press conference today, attorney Anthony Buzbee introduced the first plaintiff to the media. She identified herself as Ashley Solis. In her remarks, Ms. Solis stated: “People say that I’m doing this just for money. That is false.”

Mr. Buzbee himself repeatedly claimed that the litigation he filed on behalf of other Jane Does “isn’t about money.” At his initial press conference on March 19 announcing the first wave of lawsuits, Mr. Buzbee stated: “The case ain’t about money. And it’s certainly ain’t about seeking publicity or fame. I personally don’t need it. And these women don’t want it. This case is about female empowerment.”

In fact, according to the documentation below, Mr. Buzbee sought $100,000 in hush money on behalf of Ms. Solis to quietly settle the allegations the month before he filed the first lawsuit.

“My client’s demand is $100,000,” Buzbee associate Cornelia Brandfield-Harvey wrote in a February 9, 2021 email on behalf of Ms. Solis. Ms. Brandfield-Harvey followed up with a clarification of the $100,000 demand later that same day. “This offer remains open until Friday of this week.” Mr. Buzbee is copied on all of the emails.

The Watson representative who engaged in the discussions with Mr. Buzbee and his firm is Scott Gaffield, the General Counsel at the Athletes First agency of Laguna Beach.

On February 19, Mr. Gaffield responded to Mr. Buzbee and Ms. Brandfield-Harvey by inquiring about “the rationale behind the $100k demand” given that “we don’t believe that the alleged facts show that Deshaun did anything wrong…”

Mr. Buzbee responded that same morning: “We made a legit demand. You rejected it. We won’t be making another or bid against ourselves.” He then added: “This is Houston, Texas. Perhaps you should find him a lawyer here so you can apprise both you and your client of the landscape here and who you are dealing with.”

“My email exchanges with Mr. Buzbee and Ms. Brandfield-Harvey were very clear. We did not think that the facts showed that Deshaun did anything wrong with their client. We believed then – and fully believe now – that Deshaun learned a lesson about putting himself in this type of situation by interacting with people he does not know. As the emails show, we were willing to continue discussions on Deshaun’s behalf to explore ways to prevent a lawsuit and a public spectacle. But Mr. Buzbee informed us that he was unwilling to do so. We expect that this matter will be resolved in court.”

The email communications occurred between February 3 and February 19, 2021.

Hardin says he has statements from 18 licensed massage therapists defending Watson as polite and professional. One called the accusations against him "ludicrous."

Those accusations range from sexual misconduct to sexual assault.

One of the cases is being investigated by the Houston Police Department after that alleged victim came forward.

No criminal charges have been filed.

RELATED: Rusty Hardin is the man to call when athletes need an attorney