In Her Words: Kaylee Muthart Explains What Made Her Pull Out Her Eyes

Hallucinations were the last thing Kaylee Muthart saw as she knelt alongside railroad tracks, screaming in pain after pulling out her eyes. 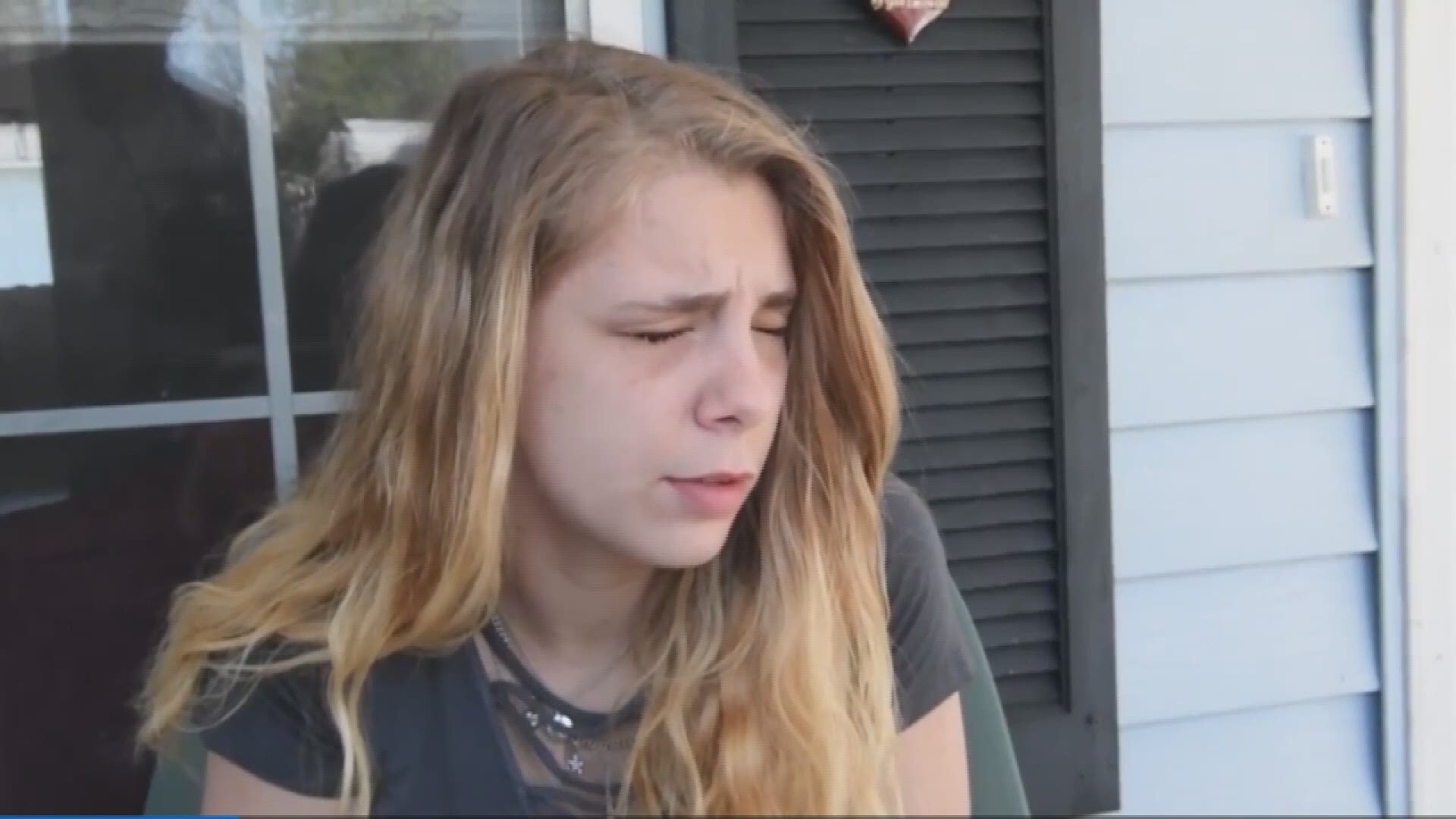 The last thing Kaylee Muthart saw was a light pole morphing into a white dove.

The trees appeared to curl downward and the skies darkened as if a storm was gathering.

Through the prism of meth-induced hallucinations, she sensed the world was ending.

She began to dig into the sockets of her bright green eyes, believing that somehow by plucking them out, she might save the world.

The visions would be the last thing she'd ever see as she knelt alongside railroad tracks, screaming in pain.

"I thought I was sacrificing myself for the world," she said. "It wasn't voices, but I thought it was real."

Muthart damaged her optic nerves when she pulled out her eyes. She has been adjusting to being blind and recovering in the month since her horrific episode.

The 20-year-old's ordeal has garnered international attention. Her story has been told in publications such as People Magazine and Cosmopolitan.

She's shared her lowest moment with the world, grisly details and all, in the hopes that she'll keep others off of drugs. When she was on drugs, she injected meth and she sometimes slept outdoors. She worried the temperatures would go so low that she may not wake up.

But now she is determined to help others.

"I mean, it would make no sense for me to be perfectly fine but I'm doing very well," she said.

Muthart's drug use did not begin with methamphetamine. She started with smoking marijuana.

Last summer, she smoked a bowl of marijuana that was, without her knowledge, laced with either meth or cocaine, she said. A few months later, she began using meth by choice. She was on and off the drug for several months. She used other drugs as well, including ecstasy.

"I want people to know they shouldn't use drugs," Muthart said. "It manipulates your thought process. Marijuana is a gateway drug. I used to think it wasn't but it is."

On the night of Feb. 5, she injected what she now believes was tainted meth into her body.

The next day, she was still high.

Shortly before noon, Muthart was walking near train tracks in a residential area of Anderson County.

She was hallucinating and thought a friend went to sleep in a nearby church named South Main Chapel and Mercy Center, which caters to the homeless, the addicted and the needy. Muthart thought her friend went to heaven and she was seeing signs that the world was ending. She knows now it was lies, lies from the drug.

"I believed what was happening was real. I saw a dove," Muthart said. "It was a memory of something beautiful, a white bird in the light. I was on my knees on the railroad track. I looked at the light pole and I thought my friend had went into the light. The light looked like a beautiful white dove."

A few people outside the church saw her kneeling and in pain.

The Rev. Terry Mitchell, a retired minister, was among the group to come out, hearing Muthart in agony. He held her hand.

She didn't know at the time what was real. In the moment, she was thrashing around, sure she needed to sacrifice herself. She was trying to get her fingers further into her head.

She struggled against several large men who had come out from the church.

"That's how strong the drug was," Muthart said. "It was the will of evil."

Woman Rips Out Own Eye, Shows Up at South Carolina Church

She Gouged Out Her Eyes. Now Upstate Woman Wants to Keep People Away from Drugs

When she was strapped down to a gurney, medical workers gave her a shot of a powerful sedative to calm her for a medical helicopter ride to a hospital in Greenville. Muthart was treated for several weeks. Her eye injuries were cauterized to seal them up, and she was diagnosed with a bipolar disorder.

Tests of her blood afterward showed methamphetamine was in her system but have been inconclusive about other additives, her mother said.

Sheriffs in the Upstate have identified methamphetamine as one of the biggest drug problems in the region and the primary driver of crime in their counties.

The drug, now half the price it was only a few years ago, is readily available, smuggled from Mexico into the United States. Imported methamphetamine is more potent than the type that used to be made from ingredients available at any grocery or drug store.

Muthart said $5 worth of meth could last her for a day or more.

More: Why do people use meth? It's not hard to figure out

Muthart is bubbly in person, talking fast and staying positive. She was like that most of the time, on drugs or not, she said.

"But there were moments of being angry, when the drug wore off," she said. "You want that feeling back of being OK. You’re really not OK on drugs. It tears you apart slowly — slowly until you can’t find a way back."

Katy Tompkins, Muthart's mother, said she decided in February she was going to do whatever it took to get Muthart into rehab. On Tompkins' birthday, Feb. 5, she didn't hear from her daughter.

"I was a day too late," Tompkins said.

At the hospital in Greenville, Muthart began to cope with her blindness.

Everyone who becomes blind will face different challenges covering most parts of their lives, from transportation to daily living, said Jacqueline Keisler, a spokeswoman for the South Carolina Commission for the Blind.

Muthart is working with the commission to help adjust to her new life. The assistance could range from job readiness training, Braille literacy, orientation, mobility and computer training, Keisler said.

Muthart took some wild guesses at Braille letters and numbers at her hospital room and guessed two out of three correctly.

She is starting to learn it for real now.

While in the Marshal Pickens Home, a psychiatric facility, she said held a basketball and made two 3-pointers in a row.

Now living at her mother's home in Anderson after leaving two years ago, she has been feeling for walls and noticing her other senses kicking in more.

She just received a refurbished iPhone in the mail Friday, tearing open the package like it was Christmas. She'll be able to use the voice controls to do more. Muthart said she's going to be checking into a longer-term rehab program soon. She has no desire to be around drugs ever again.

She normally doesn't use hand sanitizer but she recently did and wasn't able to eat mashed potatoes, the smell was too intense. Now Muthart is looking forward to cooking more, but she'll skip the sanitizer.

Tompkins said Muthart is going to wear out the family's Alexa smart speaker by asking it to play so many songs.

Faith and music have kept Muthart grounded during her recovery.

She enjoys pulling out a guitar and strumming one of the only songs she knows in full: "Cigarette Daydream" by Cage the Elephant.

She has reacquainted herself with the Bible, starting at the beginning.

"Christ is all of us," she said. "Drugs make that void seem filled but you don't know what's true. It distracts from real life. I want people to know not to use drugs."

PHOTOS: Kaylee Muthart Copes with Being Blind After Gouging Out Her Eyes

PHOTOS: Kaylee Muthart Copes with Being Blind After Gouging Out Her Eyes

Muthart wants to go back to her dream, pursuing a career as a marine biologist. She wants to use her story to inspire people, possibly as a public speaker. She wants to share her gratitude for the medical professionals and pastors who have helped her.

"God does not want you to be scared or confused," Muthart said. "I want to spread my story and I trust in God to do that for me. It took me to get my eyes out of my head to see anything good happening to me."