The prosecutor believed the officer was justified in shooting Joshua Ruffin, 17, back on April 8. 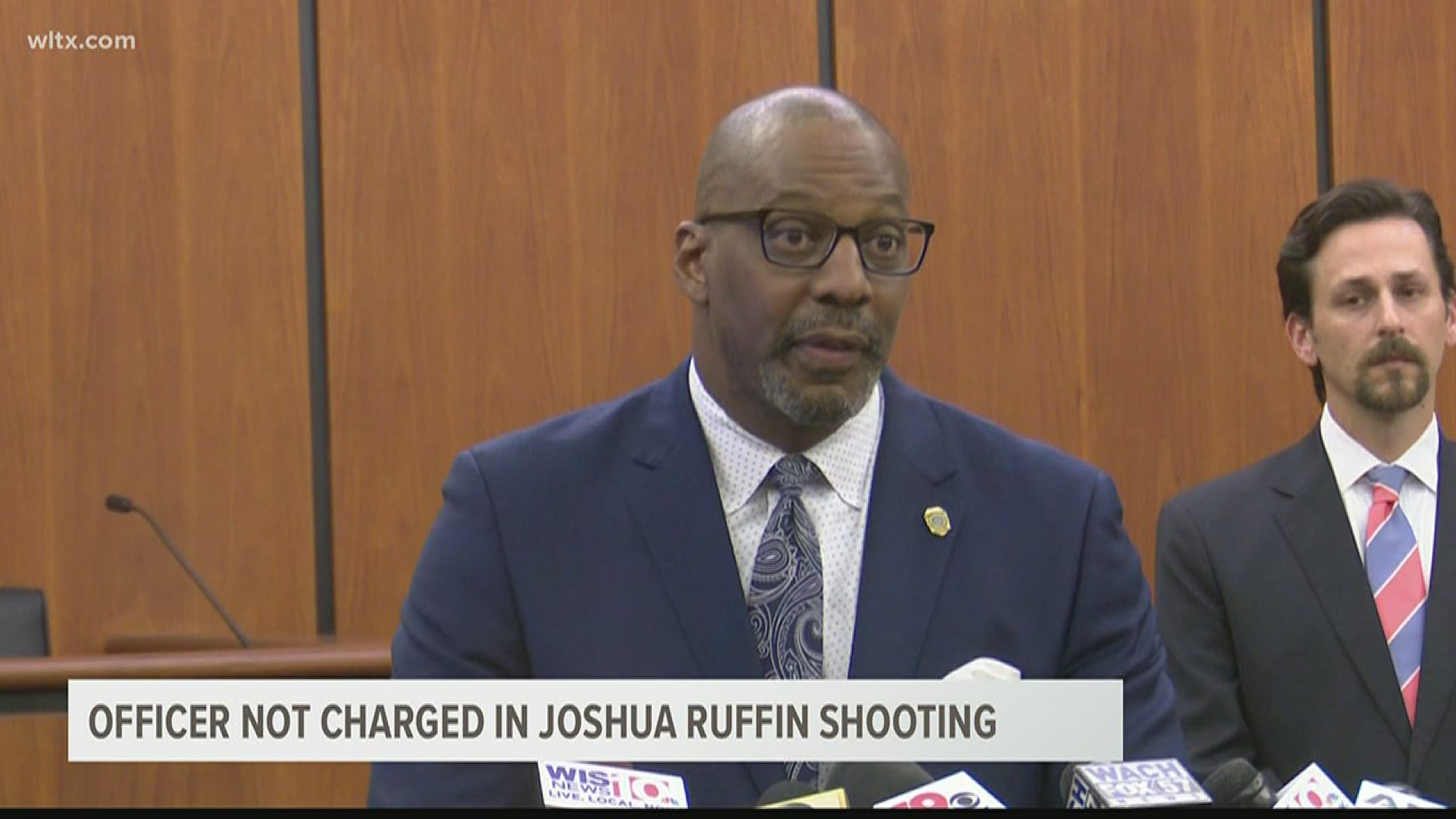 COLUMBIA, S.C. — Fifth Circuit Solicitor Byron Gipson said no charges will be filed against a Columbia Police officer who shot and killed a teen who Gipson said pulled a gun on the officer.

Gipson held a news conference Wednesday where he made the announcement.

Joshua Ruffin, 17, died back on April 8 from complications from a gunshot wound. The Columbia Police officer who shot Ruffin, identified as Kevin Davis, has been on administrative leave with pay since the shooting.

While standing in a courtroom in Richland County, Gipson laid out his case for over half an hour of why he made his decision, presenting slides and showing body cam video to back up his assertions. The evidence had been collected by the South Carolina Law Enforcement Division, which investigated the officer involved shooting, and Gipson's office then conducted his independent review.

He admitted that there was a racial dynamic to the case, because Ruffin was black and Davis is white, but ultimately concluded that played no role.

Gipson said for his office, it came down to two key questions: did Davis have reasonable suspicion Ruffin was involved in criminal activity, and was Davis justified in using deadly force? For Gipson, the answer was yes to both.

RELATED: Prosecutor to review killing of 17-year-old by Columbia police

Gipson said Davis works as a community police officer and has four and a half years with the agency. According to Gipson, Davis had gotten a text message from a community member he knew through his job that there were teens near vehicles who were messing with cars near the Monticello Road area.

He said Davis, who was in uniform and driving his patrol car, came in contact with Ruffin when responding to the area. He said when Ruffin saw Davis, he moved behind a house. Gipson said Davis noticed Ruffin had a large computer bag on his hip. He said Davis tried to stop Ruffin, but Ruffin began to run.

In a pursuit that lasted about 557 feet, Davis chased him, screaming at him "stop running" repeatedly, according to the prosecutor. Gipson said Ruffin was adjusting his waistband during the pursuit.

When the chase got to Eau Claire High School, Gipson said Ruffin crouched down and pulled out a .45 caliber handgun. Davis then fired 10 shots, one of them striking Ruffin in the forehead. Ruffin was take to the hospital where he was pronounced dead.

At the time of the shooting, the officer and Ruffin were 27 feet apart. A body cam captured the incident and was played during Gipson's presentation.

Gipson did say the computer bag was owned by Ruffin.

When considering whether or not to charge Davis, Gipson took into consideration that Davis knew that there is a high amount of property crime and gun seizures in the North Region, which is the general area of the city where the shooting took place. Combined with Ruffin's actions, Gipson said that contributed to Davis having a reasonable suspicion at the time of the incident.

Gipson said the use of force was justified because Ruffin's .45 was pointed at Davis, giving him a reasonable belief that Ruffin intended to cause him "great bodily harm." He said witness statements backed up Davis' account of events, as did the video.

Columbia Police Chief Skip Holbrook, who as at Gipson's news conference, said an internal review of Davis' actions is still being conducted, and is expected to be completed in a few days.

Holbrook did say that Davis got an oral reprimand in 2019 for not terminating a pursuit. He got an excessive force complaint, but Holbrook explained that was a case where a pit pull attacked officers and Davis and another officer fired at the pit bull.

The case has been brought up by protesters at the recent demonstrations in downtown Columbia sparked by the death of George Floyd, a Minnesota man killed by police.