Some parents have been wanting to see kids back in school five days a week. Others feel like they should wait as the number of coronavirus cases rise. 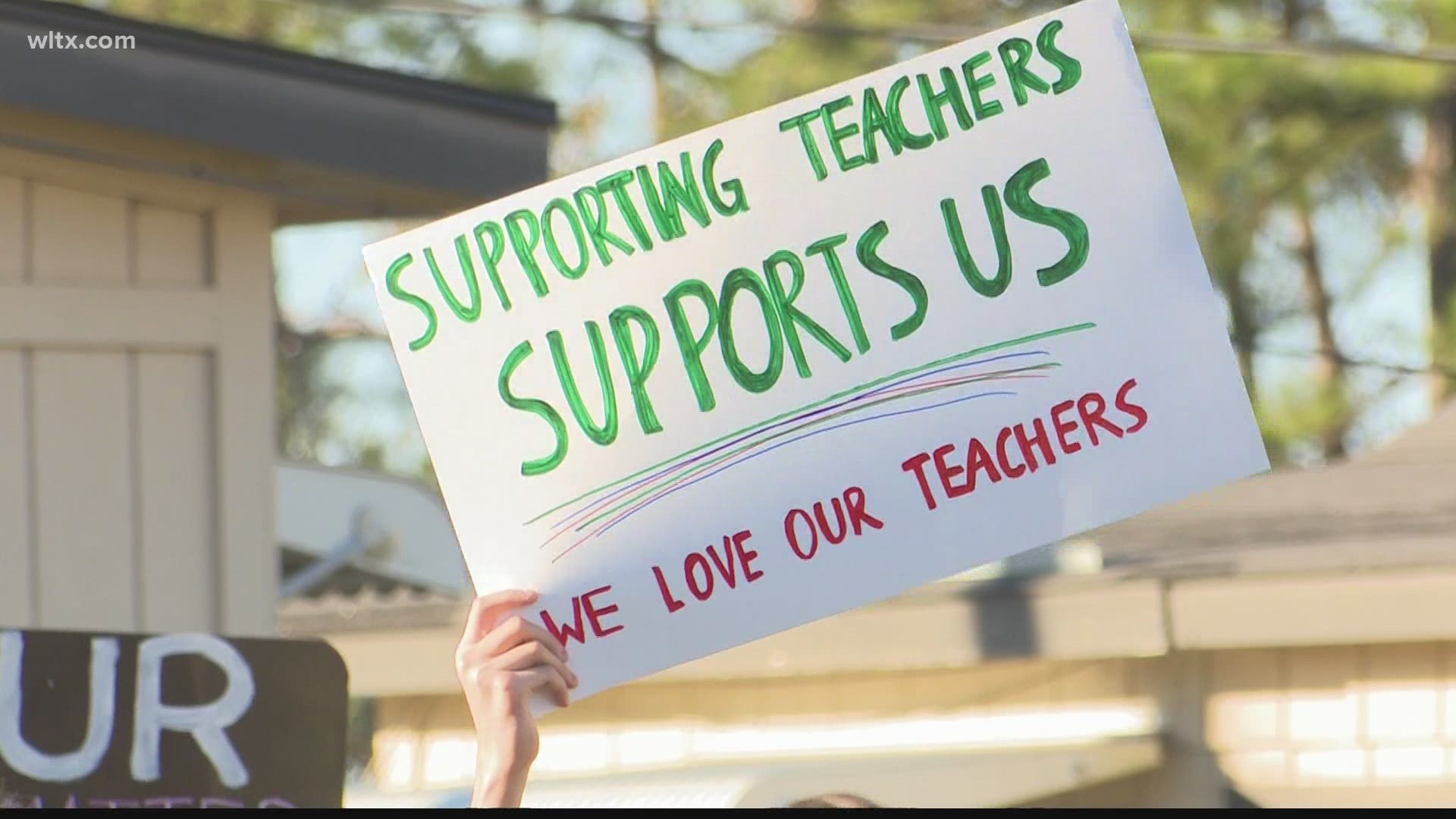 IRMO, S.C. — Parents in the Lexington Richland School District Five community gave their input after the district changed classes from a hybrid model to in-person learning.

On Monday night, the school board held a meeting where where the superintendent suggested reverting to a hybrid model, but the board refused.

Because of the decision, Lexington-Richland School District Five had students come to in-person learning four days a week.

Superintendent Christina Melton suggested they go back to a hybrid model to help keep students and teachers safe, but the board didn't approve.

While some board members agreed with the superintendent, others wanted more coronavirus data specific to their schools before allowing her to make that decision.

The school district announced they would have a special called board meeting on Wednesday, December 2 at 4 p.m.

Before the meeting started, some students in the district held an event to voice their concerns so board members could understand how they feel about their current learning environment. Many students were holding signs in support of having hybrid-learning.

Prior to the meeting, News 19 spoke with members in the community to find out their opinion of having in-person classes or remaining on a hybrid schedule.

Leslie Stiles has three children in elementary school in the district. She wants to see the school district come together to support the teachers, the superintendent and do what's best for the students to have the best education that can provided to them.

"I think a lot of parents are confused about the amount of information that's constantly changing and constantly available and just trying to make sense of what's out there," said Stiles. "I think most parents in the district want to do the right thing and knowing what that is, is a lot of time, very difficult."

@ChapinHigh, @IrmoHigh & @dutchforkhigh will be closed Tues., Dec. 1 due to a high number of staff requesting leave. The decision to close school buildings to students is being made out of an abundance of caution for school safety as several schools experience a sudden... (1/4) pic.twitter.com/8zcrfAfDrr

Stiles feels kids do better in school, but she trusts Superintendent Melton's judgement on whether students need to be learning virtually or in the classroom.

"I think it's tough to be a school board member or in any type of leadership position right now and try to make the best decisions for a diverse group of individuals like we have in our school district, but I would like for the school board members to trust the expertise of Dr. Melton and her staff and I would like them to come together as a group in that support," explained Stiles.

April Alsup has two children in the district that go to an elementary and middle school. She believes teachers at the secondary level are being pushed to a breaking point.

"If we go back to a two day a week hybrid schedule, there's fewer kids in the classroom, less likelihood of a close contact so that so many teacher won't have to go out to be quarantined and can be in the classroom," said Alsup.

Alsup says she feels the district is in a position, if the school board members don't step up and support staff in the district to do their jobs in a way that is manageable, there may be devastating impacts for the district.

"If education can't happen in the classroom the way that the schedule is now and there are a lot of classrooms and a lot of teachers where that's what's happening because they don't have the time because of how overloaded they are, then education isn't happening," explained Alsup.

Some parents who are in favor of continuing in-person learning in its current format says they need to work and their children learn better this way.

Some others say they would be fine with middle and high school students doing hybrid learning, but elementary students should still go to school.

Stiles says she can understand why parents are frustrated with how frequently the schedule has changed but she also understands the district is making decisions when they are able to.

After a high volume of staff leave requests Tuesday forces Chapin, Irmo and Dutch Fork High Schools to close, students participated in e-learning. Stiles says she would be supportive of teachers if this happened in other schools in the district.

"When teachers don't feel supported, I don't think they have a lot of options," explained Stiles. "They're not standing up for themselves, they're standing up for our kids and they're telling us this is not a safe environment for the kids so if that happens at the elementary level, I'll be one hundred percent behind the teachers."

At the end of the day, Stiles hopes to see the community come together.

"I'm really proud to be in District Five. I think is one of the top districts in the state. I think we have an excellent group of teachers and administrators who run our district," said Stiles. "I would like to see us to make our district stronger and come together as a community and not let this be a divisive force among us because this pandemic will go away and we still have to lead our district."